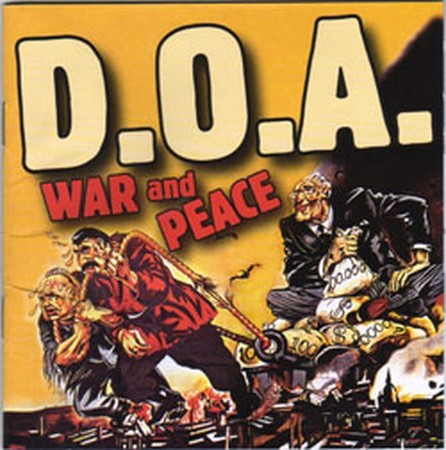 From their classic 1978 7″€EP of the same name there’s Disco Sucks, and 1981 Fucked Up Ronnie, as well as all my other favorites including the reggae ditty  War In The East from War On 45 and  Fuck You  from the Right To Be Wild 7″ single. (And of course that one will definitely be added to that ultimate  fuck you  CD I’ve been working on making for a while.) There’s just something so comforting about the raw productions of these songs, as they have retained all their energy and urgency.
There have been a couple of D.O.A. comps here and there, but War and Peace tries to do the near-impossible and cover 25-years worth of Joey Shithead and company on one disc. Does it succeed? Well, pretty fairly — even if the band is better-represented with its earlier work on something like Bloodied but Unbowed — this is at least a solid tribute to sheer persistence. It also goes back to the very beginning, in 1978, with its restrained musical criticism — as their 7″” debut, “”Disco Sucks,”” remains a snarling, gargling, goofily voiced explosion, and pretty damn on-the-nose when it came to being punk in the understood sense of the post-Sex Pistols scene. The vast majority of songs come from the band’s first ten years, and understandably so, given that’s when the group made its name, and more or less codified its never-say-die punk stance. If Shithead has only changed his approach and sound by inches over time (most notably with reggae, and a sometimes calmer, poppier approach), it’s not because he has a lack of targets specifically in his sites. Addressing nuclear paranoia (“”World War 3″”), and the Reagan years (“”Fucked up Ronnie””) in earlier days, the W.T.O. and multinationals are among the objects of wrath in more recent years, and at his best, Shithead makes his point with brusque, invigorating, and energetic songs. Years down the path, “”The Enemy”” and “”Fuck You”” still sound rude and great. A few rarities and one-offs help to fill out the collection, including “”Behind the Smile,”” and a collaboration with Jello Biafra on “”That’s Progress,”” both originally from the Terminal City Ricochet soundtrack. A slew of sometimes hilarious archival photos, a roughly written but clear family tree, and complete lyrics and discography take care of the extra details for the newcomer…by Ned Ragget, All Music

Here is all the music, every single second of the album, all 26 songs: 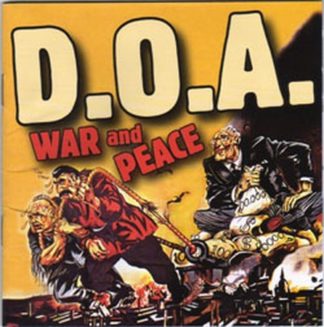