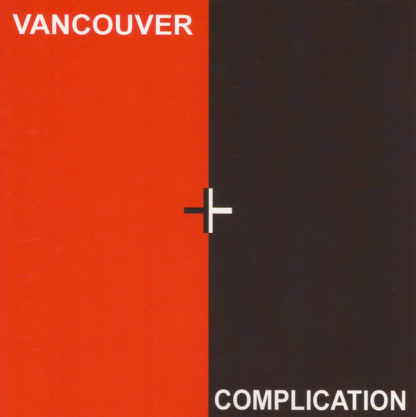 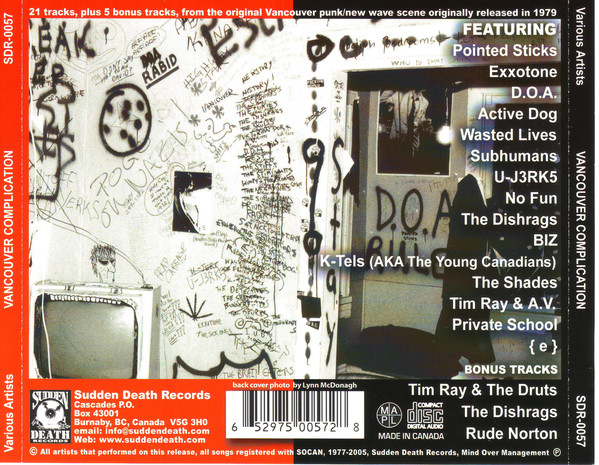 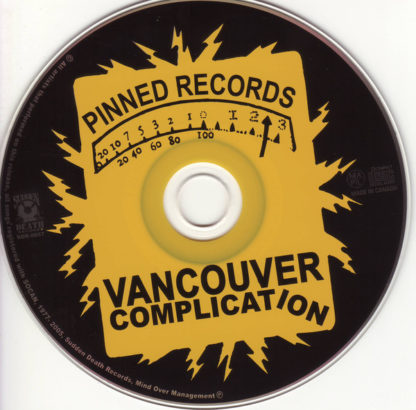 Melodic Punk Rock, New Wave and Power Pop from Canadian bands like DOA, Young Canadians or the Subhumans. A classic. This is the reissue of the cult 1977 compilation! Vancouver is a bustling west coast seaport in British Columbia, is among Canada’s densest, most ethnically diverse cities.

A classic late-’70s punk-era city-scene survey (the liner notes for the 2005 re-release specifically mention the Akron compilation on Stiff as the source of inspiration), Vancouver Complication was both an important release for its time and in retrospect an enjoyable period piece.The reputation of such groups as D.O.A. and the Subhumans, among others, would grow beyond their appearances here, but even the one-offs and never-heard-agains help contribute to the whole thing. As was so often the case with early punk efforts away from New York and London, many of the efforts were aping to one extent or another (the Pointed Sticks’ Anglophilic “The Marching Song” and Wasted Lives’ “Wirehead” are just two of several songs that would love to claim they were from Camden instead of, say, Burnaby). D.O.A. themselves were already well under way, Chuck Biscuits drumming like a superstar, but Joey S******* still had to get the Clash affectations out of his voice, as “Kill Kill This Is Pop” readily shows. In ways its the bands that were starting to find other less straitjacketed ways around punk inspirations that come up with the lasting winners — if Exxotone loved Devo and Active Dog XTC, they did so well, while BIZs straight-faced ’50s tearjerker gone wrong, “Pork U,” is a murky masterpiece of comedy. Equally funny and a lost power pop classic is the K-Tels’ “I Hate Music,” a “Losing My Edge” for its time and place. Meanwhile, the U-J3RK5′ “U-J3RK5 Work for Police” is a weird brief spaz rant thats somewhere between early Roxy Music and MX-80 Sound and still inhabits its own universe, while (e)s solo effort, “e925” predates lo-fi as genre signifier by some years. The 2005 reissue adds five tracks of varying worth, including three (one being a ridiculous cover of the Gilligans Island theme) from the Ramones-sounding, otherwise unheard-on-the-original Rude Norton.