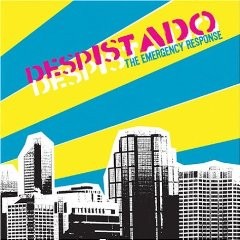 about
Canadian prairie-rockers, DESPISTADO are as much a mix of Wires artful passion as perhaps Modest Mouses steadfast quirk and with the release of The Emergency Response (JT1096) they make their spastic and raging debut worldwide. Angular, driving, and thoroughly commanding DESPISTADO are just out the gate and already hold court as the band to watch out for.
credits
released 22 June 2004
JT1096

5.0 out of 5 stars First Canadian Band to Sign w/ Jade Tree!
Despistado is an amazing band that you will want to listen to if you need a quick pick me up. Their sound is complex but it flows together very smooth. They are a little like ‘at the drive in’ or ‘juno’…and i love them. i think that everyone and anyone should purchase this album and rock the hell out!

A gang of young, snotty and, most likely damn chilly Canucks got together with a bit of punk spirit and an ear for clanging post-hardcore. Naming themselves Despistado (Spanish for a scatterbrain), they issued their first album, The Emergency Response. So depending on who you ask, “The Emergency Response” runs the gamut of influences, ranging from Gang of Four to Wire to Repeater-era Fugazi to a more danceable version of Refused. Call it a union of mutated melodies, borrowing sounds and influences from the left, right, old and new sides of the indie scene-a 20-minute journey through the world of artful punk, where anything can and must go. And since it was probably too cold to go outside while these songs were being written, why the hell not?