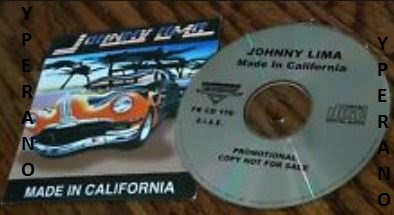 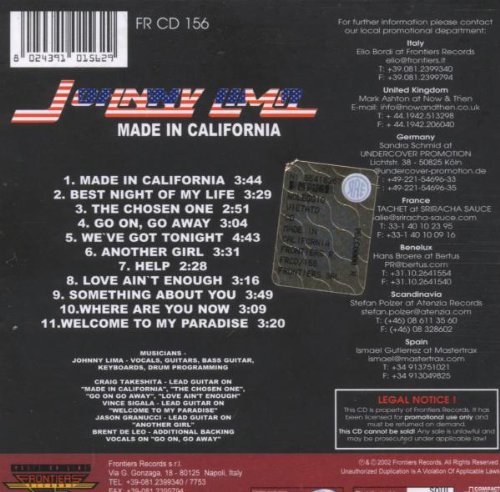 Recommended if you like … Hard Rock, Bryan Adams, Def Leppard

In 1996 Johnny Lima released his independent début album, which showcased strong melodies and vocal performances and put a new spin on the familiar styles of Def Leppard, Bryan Adams and Bon Jovi. It didn’t take long to catch the attention of Mark Ashton from Now and Then in the UK, who later signed Johnny to a production deal.
Two years later Johnny went back to the studio in order to record the follow up to his début. He spent most of 1998 recording “Shine On” and he also flew to Manchester, England to sit in on final mixes with Gary Hughes (Ten). In April 1999, “Shine On” finally saw the light of day in Europe on Frontiers Records. The album got rave reviews all over the world, including a perfect score in Scream Magazine (Norway) and Majestic Magazine (Holland). Later that same year, Johnny was asked to perform at the annual GODS show in England. Backed by Scottish rockers AGE OF REASON, Johnny put on one hell of a show!
Shortly after he arrived back in the States, Johnny began writing for his third album, but before he recorded a single note, he was asked to perform again in England at the GODS show in 2000. It didn’t take long for Johnny to begin recording the new album once he arrived home from England. Little did Johnny know, 2001 was going to be a very busy year personally. His marriage and the birth of his first son put music temporarily in the back seat.
So here we are in 2003 and “Made In California” is finally completed. From hard rocking songs like “Made In California”, to heartfelt ballads like “We’ve Got Tonight”, to a punk rock version of The Beatles’ “Help”, Johnny Lima has once again delivered the goods and has proven that hes still a major force to be reckoned with in the world of Melodic Rock.

CRITICS ARE RAVING ABOUT MADE IN CALIFORNIA
“Its an album that has a tip-top excellent standard throughout and I urge you to go out and buy it A.S.A.P. 10/10 points!”

“Its been a long wait, but all will be forgiven once your ears taste the quality of the album. Its prime time melodic rock with plenty to offer fans of the first two albums. The production is first rate and the songwriting is as catchy as anything currently on offer. The man deserves to be a far bigger star than he is, but maybe this album can be a new starting point. Highly recommended for classic melodic rock fans.”

“A strong and commercial album that will delight existing fans and also offers much to enjoy for fans of Bon Jovi, latter day Def Leppard and some followers of Harem Scarem. A fine album indeed.”

It might have taken a while, but “Made In California” is well worth the wait. Johnny’s becoming one of the most reliable artists of the genre 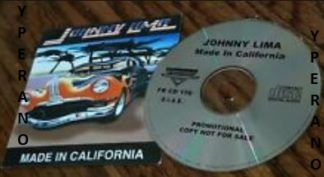