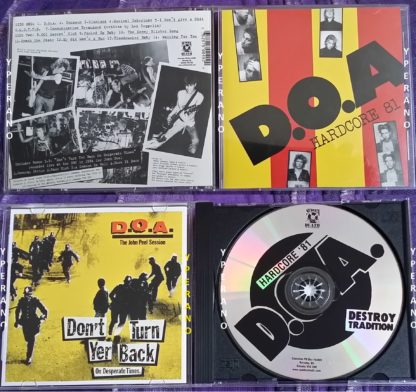 Hardcore ’81: Studio album by D.O.A.
Released 1981
Recorded 1981
Genre Hardcore punk
Length 34:56
Label Sudden Death
Producer D.O.A.
Hardcore ’81 is an album by the Canadian hardcore punk band D.O.A.. It is considered by some to be the first reference to the North American punk scene as hardcore.
SAMPLES: www.allmusic.com/album/hardcore-81-mw0000663324
This CD contains more songs than in this youtube audio-video below

Personnel:
Joey “Shithead” Keithley – lead vocals, lead guitar
Randy Rampage – bass guitar, backing vocals
Chuck Biscuits – drums
Dave Gregg – guitar and vocals
Tracy Marks – acoustic piano on “Unknown” also engineered the album
————————————————————————————
Randy Rampage (Randall Archibald) is a founding member, bass player and occasional vocalist of the Canadian hardcore band D.O.A.. He played on D.O.A.s seminal early punk albums Something Better Change and Hardcore ’81, along with vocalist/guitarist Joe Shithead, drummer Chuck Biscuits and guitarist Dave Gregg in Hardcore ’81. Rampage left D.O.A. in 1981 but returned in the year 2000 after a nearly two-decade absence. He played on their 2002 Win the Battle album but then left the band again. He rejoined D.O.A. in 2006, remained in the line-up through 2008 and was featured on their Northern Avenger, produced by Bob Rock. On the eve of the Northern Avenger tour, it was announced that Rampage was leaving D.O.A. once again.
Rampage has appeared now and then as the vocalist for the Canadian speed metal/thrash metal band Annihilator, which he recorded one album with in 1989, called Alice in Hell, leaving the band after the tour. In 1999, he returned to the band and recorded one more album called Criteria for a Black Widow after which he left once again to rejoin D.O.A.
——————————————————–
This Vancouver foursome was already a band to be reckoned with on their first three singles and début, but they went for the jugular on Hardcore ’81, producing a rare and astonishing moment for the ages, a direct precursor to the Replacements’ first LP torch job later that year. With the greatest drummer in punk history in Chuck Biscuits and an equally smokin’ bassist in Randy Rampage, 1978-1982 D.O.A. had an unbelievably intense rhythm section to back the heavy, two-guitar power of Joey Shithead and Dave Gregg. With chops that actually bettered their primary influence, the Clash, and a take-on-all-comers attitude, these guys rocked — and they knew it. With the exception of the much different, faster, more thrash Bad Brains début, nothing else in the then-new hardcore genre came close to this wild LP. These 14 songs whip by quick with great thrill and tumult, an unusual, fun mixture of drinking buddy “I Don’t Give a Shit” party tunes (“My Old Mans a Bum,” “Fucked Up Baby”), wry, sardonic culture commentary (“M.C.T.F.D.” aka “Middle Class Television Family Daughter,” “Unknown”), and sobering socio-political outrage (“D.O.A.,” “Smash the State,” “Slumlord”). But what you can’t forget are the machine-gun Biscuits fills, triggered by the merest hint of any looming chord change yet totally anchored on Rampages booming bass. Or Gregg and Keithleys hot riffs that are so thick and yet slippery that they threaten to explode. Or Keithleys likable bear-growl vocals, as full of bonhomie good-guy spirit and wicked humor as they are with his sweat and vigor. Or songs so catchy, you want to sing them as loud as your lungs will take you. But like the ’60s Who, ’70s Clash, and ’70s Buzzcocks (other bands of this same rank), they just don’t come around often. Good thing they made Hardcore ’81 before they left us
=======================================================
5.0 out of 5 stars one of Canada’s best punk albums of all time,
this lp-long out of print, contains not only DOAs best songs ever-it is the perfect DOA album. All
14 tracks are killer with no filler to sum’ it up….there is even a hilarious version of Led Zeppelins ‘Communication Breakdown”. If one has to own two killer Canadian punk CDs this album coupled with their first album something better change’ -THIS IS IT..It gets also a perfect score. Burnabys finest-DOA are legends.A band I’ve always loved -Now if only they re-released The Subhumans catalogue (1978 to 1983) on
Sudden Death Records,I’d be totally thrilled.These long out of print albums are sorely missed and need to see the light of day once again.I love this band….
========================================================
5.0 out of 5 stars Fantastic Album,
If you like your music loud fast and abrasive, this is the album you must get. DOA is a great band, and this their best album. It is a non-stop flurry accented by great drumming by Chuck Biscuits. This album should be mandatory listening for anyone who wants to know what true punk music is all about.
========================================================
5.0 out of 5 stars Still as vibrant as the day it came it out,
I have to admit I’m a little biased – I’ve been listening to DOA for over 30 years. This is their best album. I feel it has all the ingredients of a great punk album – loud, raw music, anti-establishment music, and humour. This is a band at its best – full of energy, make statements and doing it all with an attitude that can’t be faked. 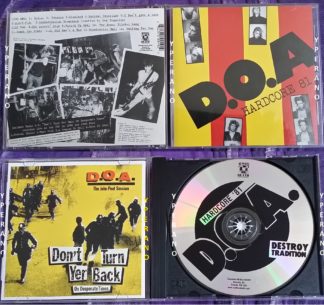