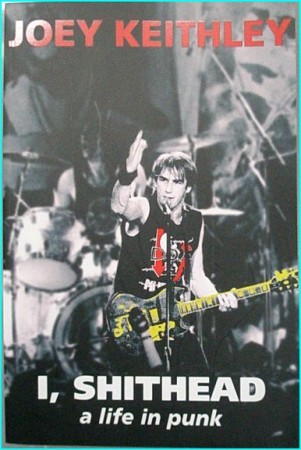 Joey Keithley, aka Joey Shithead, founded legendary punk pioneers D.O.A. in 1978. Punk kings who spread counterculture around the world, they’ve been cited as influences by the Red Hot Chili Peppers, Green Day, Rancid and The Offspring; have toured with The Clash, The Ramones, The Dead Kennedys, Black Flag, Nirvana, PiL, Minor Threat and others; and are the subject of two tribute albums. They are the band that introduced the term hardcore into punk lexicon and may have turned Nirvana’s lead singer Kurt Cobain onto a career in music.

But punk is more than a style of music: its a political act, and D.O.A. have always had a social conscience, having performed in support of Greenpeace, wome’ns rape/crisis centres, prisoners rights, and antinuke and antiglobalization organizations. Twenty-five years later D.O.A. can claim sales of hundreds of thousands of copies of their 11 albums and tours in 30 different countries, and they are still going strong.

I, Shithead is Joeys personal, no-bullshit recollections of a life in punk, starting with the burgeoning punk movement and traversing a generation disillusioned with the status quo, who believed they could change the world: stories of riots, drinking, travelling, playing and conquering all manner of obstacles through sheer determination.

Praise for D.O.A.:
They rock out. They blow the roof off. Some of the best shows I’ve seen in my life were D.O.A. gigs. Ive never seen D.O.A. not be amazing.Henry Rollins (Black Flag, Rollins Band)

Joey Shithead Keithley has long been an activist, including as a candidate for the Green Party, and is the founder of Sudden Death Records. He lives in Vancouver with his wife and their three children.
—————————————————————-
Editorial Reviews
From Booklist
Punker Keithley, aka Joey Shithead, recounts life in the seminal punk band D.O.A. Having outlived such more famous punkers as the Ramones, the Clash, and Black Flag, D.O.A. has seen other acts issue tribute albums–very unpunkishly reverential but underscoring not only appreciation for D.O.A.s stuff but also how punk music, like everything the punkers originally hated, has wormed its way into the pop canon. Not that Mr. Shithead would appreciate that sort of thing; he would prefer hewing to D.O.A.s slogan talk-action=0 (i.e., talk minus action equals zero), a strange credo for an autobiographer, perhaps, but then nobody said punk history would be easier to digest than the punk lifestyle. Although less iconic than, say, Henry Rollins or Joey Ramone, Keithley-Shithead was an important influence on such big-hit bands as the Red Hot Chili Peppers and Nirvana. Think of the Velvet Underground phenomenon of influence well beyond album sales to fully appreciate the D.O.A. saga. Good stuff about an underappreciated, anarchistic act. Mike Tribby
Copyright © American Library Association. All rights reserved
Review
There are countless other stories told in I,Shithead that will hold any DOA fans attention for hours on end.
Reflector (Reflector )

Joe Keithley, lead singer of the seminal punk rock band DOA, is featured prominently in the new feature-length documentary American Hardcore, which debuted at the Sundance Film Festival in January and is now in limited release across North America.
American Hardcore (American Hardcore )
See all Editorial Reviews
Product Details
Paperback: 256 pages
Publisher: Arsenal Pulp Press (April 1, 2004)
Language: English
ISBN-10: 1551521482
ISBN-13: 978-1551521480
Product Dimensions: 5.1 x 0.7 x 7.8 inches
Shipping Weight: 15.2 ounces
—————————————————————-
5.0 out of 5 stars Almost as good as being there
Anyone, and I do mean ANYONE, who is interested in the west coast punk scene needs to read this book. Keithley gives a fantastic first hand account of how he formed his band and all of the tests they endured going from relative nobodies to one of the biggest and best known punk bands in North America.
The book is also a mini how-to manual for anyone interested in starting up their own punk band. Keithley talks about the business side of the music industry, what its like to play gigs to crowds of different sizes and interests, and above all, he gives a great first hand account of just what it takes to make it in the music business.

Finally, Keithleys writing style is very easy to digest. The book is written like the lyrics to many of his songs; straight ahead without and BS! Whats more, the book contains many pictures and personal anecdotes about Vancouver and places beyond. In reading the book it easy to see yourself sitting at a bar with Keithley as he tells a couple tales over a couple of beers.

If you’re a punk, or even think about calling yourself a punk, then you owe it to yourself to give this book a read.
—————————————————————-
5.0 out of 5 stars A God-father of punk speaks to you.
This review is from: I, Shithead: A Life in Punk (Paperback)
Sit down at a kitchen table with Joe Keithley. Open a few beers, and hand him one, or two… Ask him to give you a crash course on himself and his legendary punk band, D.O.A., making sure not to gloss over the interesting bits.
If you can’t arrange to do this with Joe, picking up a copy of this book would be your only alternative. Its 200+ pages of compelling reading, written by a man who helped define punk music both in and out of Canada, and who certainly put Canada at the roots of the punk historical tree.

Unlike a lot of books about punk bands, this is first-person stuff of the first order.
—————————————————————-
5.0 out of 5 stars A wild trip
As a big fan of DOA since the late seventies, I was really looking forward to reading this book. Joe gives you a great amount of background about one of the hardest working bands ever.
If you love punk music and the DIY attitude, this book is must read.
—————————————————————-
5.0 out of 5 stars Essential punk rock history,
I will start by claiming 100% bias as I’ve known the author for well over 20 years and have greatly enjoyed his contributions to punk rock for over 25 years. DOA taught a lot of us how to go out and get it done, with “it” being spreading the music and message to the less than masses spread out among the world. Joes book is simple, straightforward blast of history that will interest anyone into the punk rock way of existence. Essential reading, so get it and enjoy!

Be the first to review “Joey Keithley I, Shithead (a life in Punk) BOOK by the D.O.A singer / guitarist” Cancel reply

You're viewing: Joey Keithley I, Shithead (a life in Punk) BOOK by the D.O.A singer / guitarist £18.00
Add to basket