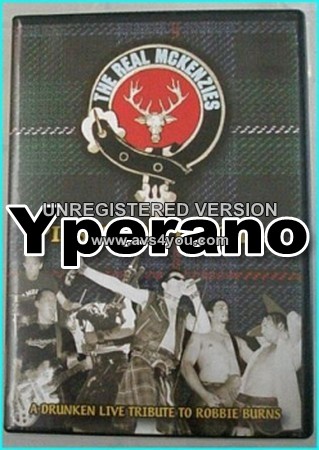 A unique blend of traditional Scottish tunes and hardcore punk music, The Real McKenzie are deeply rooted in their Celtic heritage. Their unlikely instrumentation is highlighted by the addition of bagpipes to the standard guitar, bass, and drum setup. The Vancouver, Canada-based sextet put on a live show that must be seen to be believed, always appearing tricked-out in the traditional garments of kilt, high stockings and sporrans, while performing rowdy punk rock in accompaniment to the ubiquitous booze-fueled party that follows them everywhere. In this live show the group pays drunken homage to Scottish folk legend Robbie Burns, with a set list that includes My Bonnie, Scots Wha Hae, Tae The Battle, Weill Ye Be Proud, King O Glasgow, Sawney Beane Clan, 8 Bastards, 9 Stone of Kings, Scottish and Pround, Haggises, Another Round, Auld Mrs Hunt, Thistle Boy, Auld Lang Syne, and Loch Lomond.

There’s a nasty misconception that’s been going around since at least two or three centuries ago, about how Scottish folks like nothing more than to gabble on about haggis and drinking and fighting and wearing kilts. Canadian-Scots punk-types The Real McKenzies, however, via their just-released live DVD, Pissed Tae Th’ Gills, hope to expose this offensive stereotype for what it is.

What they want to do is to gabble on about haggis, and drinking and fighting, and wear kilts. But they do it with the assistance of guitars and songs about “”My friends are all bastards””.

Just like The Flogging Dropkicks or The Molly Murphy’s or whoever seek to meld contemporary pop-punk with Irish folk ballads and rebel songs, so these hoodlums want to perform traditional Scots ditties like My Bonnie or Loch Lomond with added power-chords and guitar solos and swearing. Most of the time, this works marvelously, like in the extended bagpipes & guitars intro, or the roaring renditions of Scots Wha’ Ha’e and Auld Mrs Hunt. On a few occasions, though, you get the feeling that you really needed to be there, in order to truly appreciate the demented wonder of the occasion.

This live show was recorded on Robbie Burns Night, 2000, and the disc as a whole is offered as a tribute to the great poet, songwriter and prestigious sexer. Inevitably, Burns’ Auld Lang Syne is given a going-over at the end

The whole thing is terribly entertaining, and if one is so inclined, one can even, thanks to the miracle of Digital DVD Disc, freeze-frame the bits when “”Ranting Vocalist”” Paul McKenzie does his high-kicks, just to see if he has anything on underneath that kilt.

The extras are few but reasonably enjoyable. There’s a brief interview, a behind-the-scenes type deal, and best of all, a music video for the brilliant Mainland.

For sure, it doesn’t do much to counter the stereotypes, but it’s still a heap of the “”fun”” and so on.” 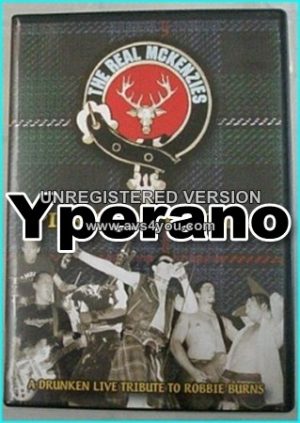