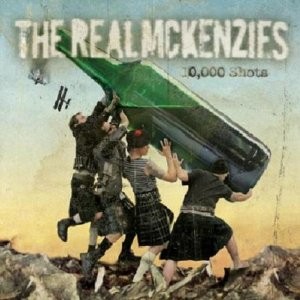 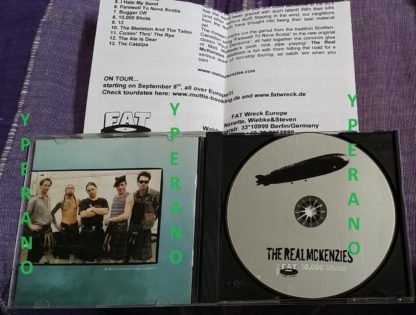 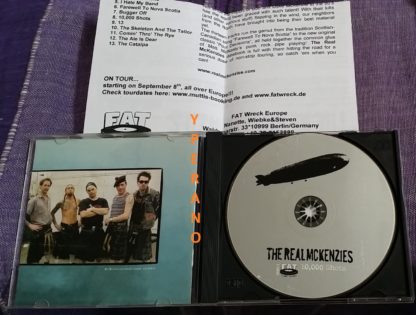 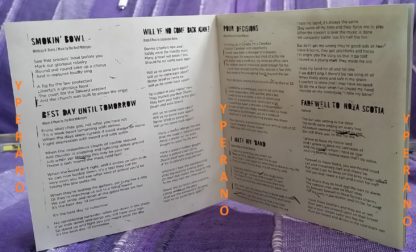 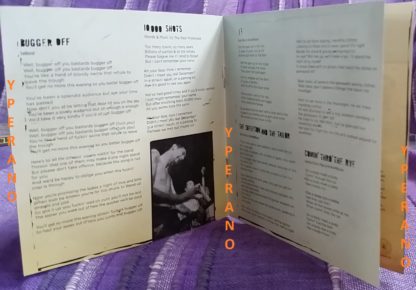 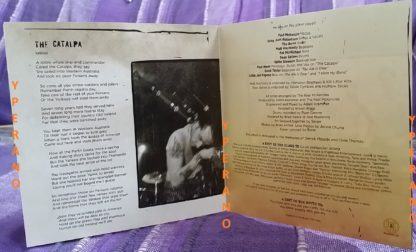 The Real McKenzies is a North American Celtic punk band founded in 1992 and based in Vancouver, British Columbia.
In addition to writing and performing original music, Real McKenzies perform traditional Scottish songs, giving them a new punk-influenced sound.

10,000 Shots is the fifth album by Scottish-Canadian celtic punk band The Real McKenzies, recorded and released in 2005.
If the name of the album wasn’t enough of a hint, then let me spell it out for ya…The Real McKenzies like drinking! If theres one thing that these Scottish-Canadians love nearly as much, its playing punk rock music! The thirteen tracks on 10000 Shots run the gamut from the tradition Scottish-Canadian song ‘Farewell To Nova Scotia’ to the new original classic ‘Pour Decisions’, all held together the common glue of Matt McNastys punk rock pipe playing! Fat Wreck. 2005. 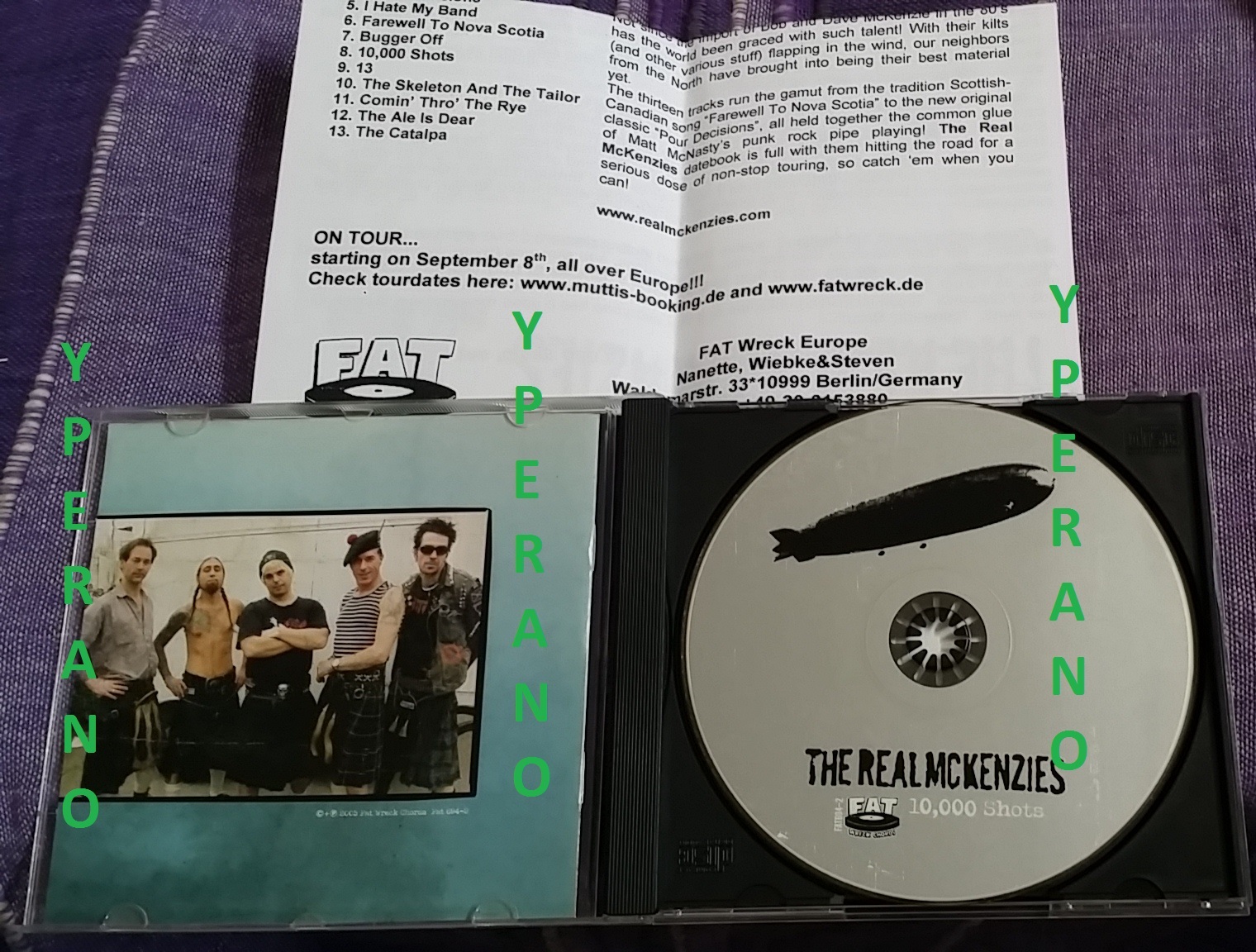 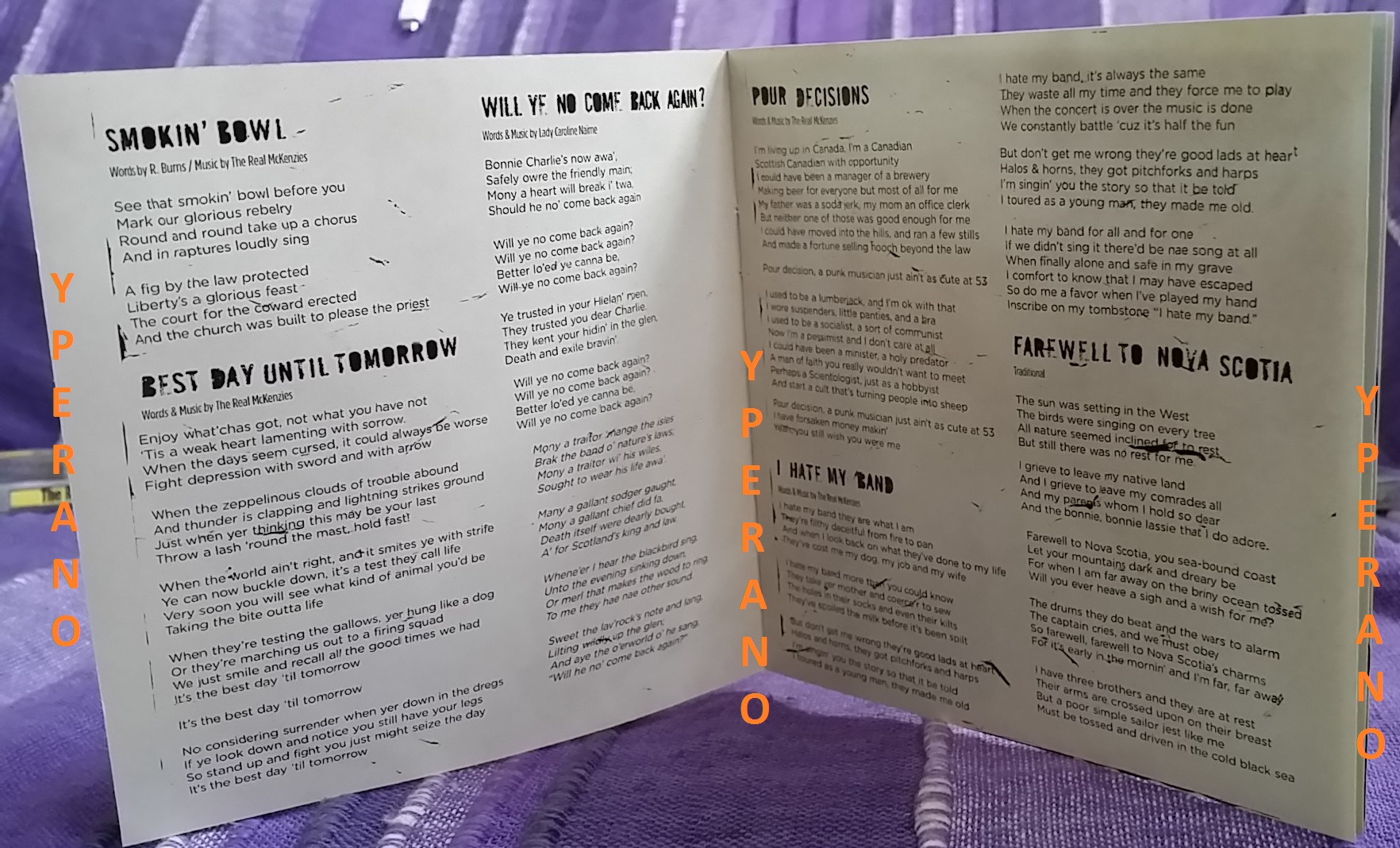 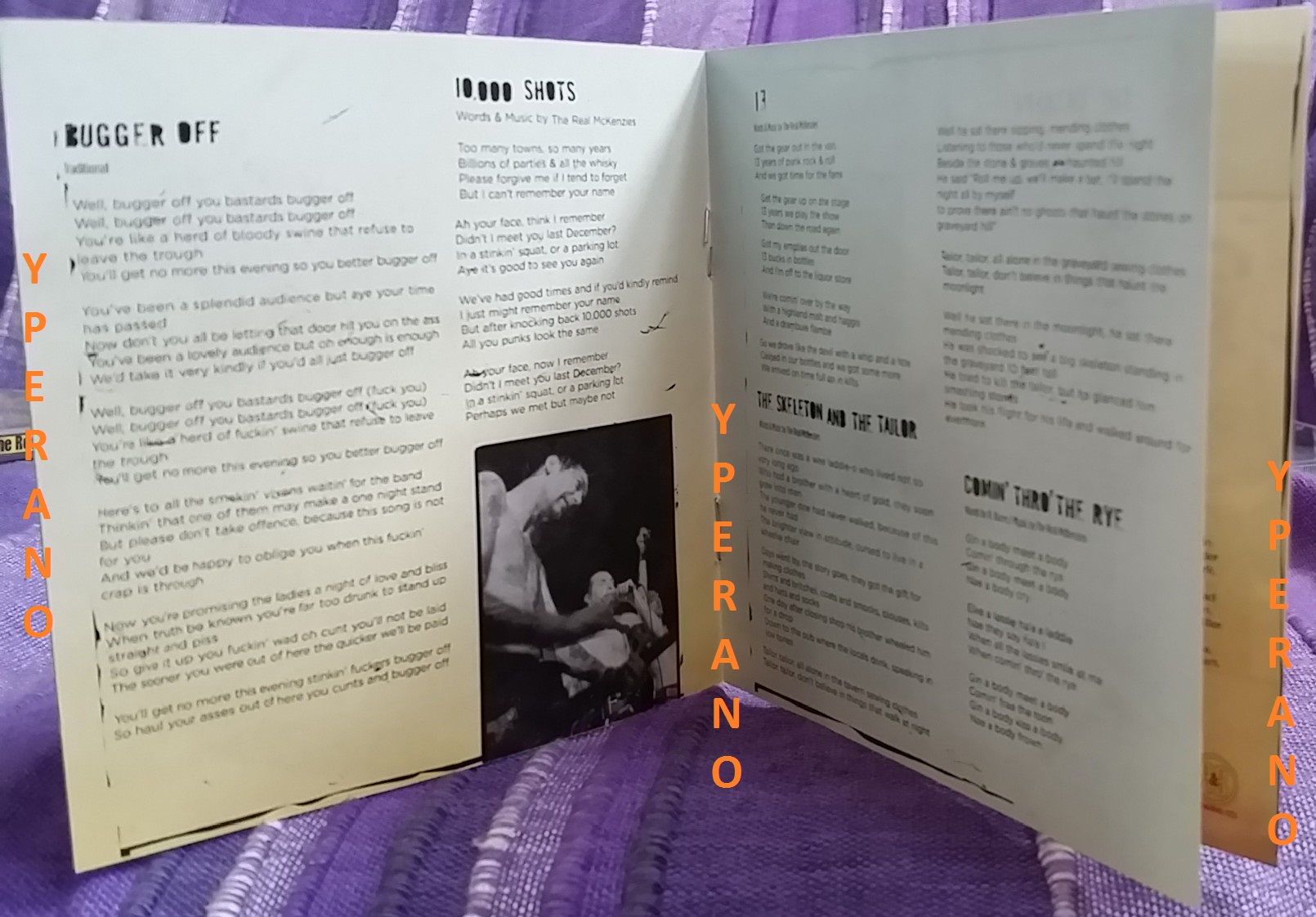 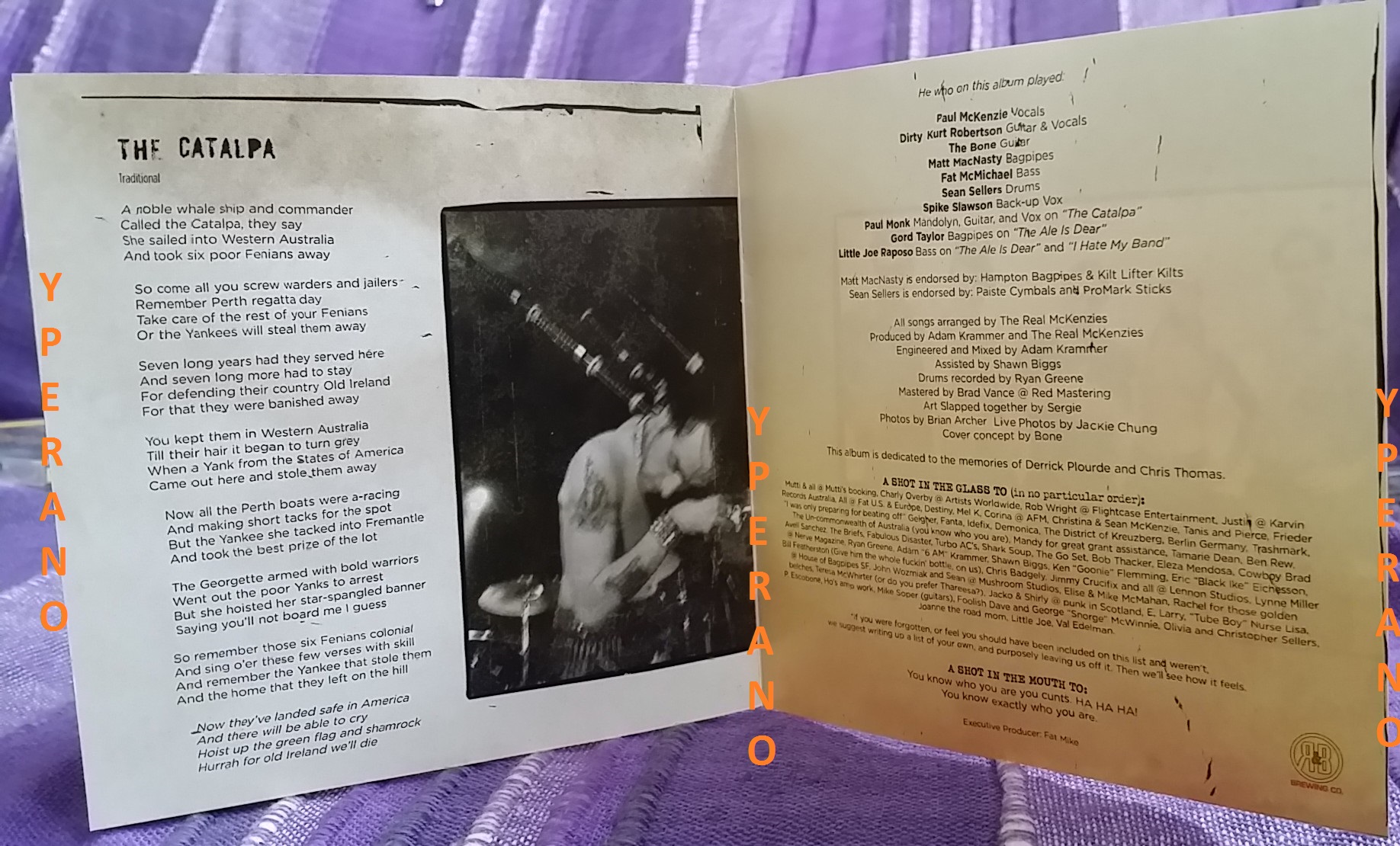 5.0 out of 5 stars A must-have for any collection..,
I have to say, this has to be the bands most impressive and venerable release to date, and may very well prove to be a musical milestone for the band. Now, before I go on, let me assure you, I’m not that easily impressed, having been involved in the music industry in one way or another for some 15 years, I’ve become somewhat jaded and apathetic regarding new music (especially from local talent) , and hence I’m rarely this enthusiastic about an album.
I’ve known The McKenzies for a long time and worked with them on a few occasions over the years, and although I’ve always enjoyed their music, there was never really any particular song that would be exalted enough to inspire me buy the whole album…. something that very few songs/bands have ever managed to attain. But after hearing the first few tracks, I knew this would be one of those albums that I actually would go out of my way to buy, if I didn’t already have it.
So whats so great about this particular McKenzies recording, you may ask? … well, pretty much everything! This is one of those rare albums that you listen to and not once do you get the urge fast forward to the next track. And almost* every song is arresting enough to make you want to listen to it again immediately after its done, starting with the first track, a tight yet smooth rendition of a Robbie Burns poem called “Smoking Bowl” ( I say almost because one track, another Burns traditional “Coming Through The Rye” fails to impress me like the rest of the songs do, but then again, they didn’t write it, so its all good) .
It is immediately apparent that Fatty McMichael (Fat Mike from NOFX, Fat Wreck Chords) is a major contributor to this album, not only in terms of the outstanding production, but also as he sneaks in some “Fat grooves” as the bass player on many of the tracks. That is not to say that the songs Fat Mike doesn’t play on are any less momentous… in fact, Little Joe ( formerly of Rich Kids on LSD) serves up some wicked bass on these tracks, most notably, during an instrumental with only drums, bass, and bagpipes (The Ale is Dear).
Anyway, I could go on and on about all the reasons you should check out this CD, but I know its not necessary. There is so much kick ass material on this album, I think everyone will find it hard to resist picking up a copy, and that includes those who have never listened to them before.

5.0 out of 5 stars Classic McKenzies fashion and better Produced
If you are a McKenzies fan then you will not be disappointed by this CD. It leads off with the song “Smokin’ Bowl” and it was with the one song I knew I wouldn’t be disappointed. Of course, how can you be with these Canadian, kilt-wearing, punks?
With songs like “I Hate My Band” “10,000 Shots” and “Bugger Off” and lines that are throw backs to Monty Python- “I used to be a lumberjack, and I’m okay with that/ I wore suspenders, little panties and a bra” (“Pour Decisions”)- Their humor is blended well with the seriousness of their Scottish, Punk and Canadian roots. And if you’re wondering they do have the correct balance of Bagpipes and guitars on this album, their previous CDs usually seemed to lean more on one than the other, but I believe this one has balanced them out without outdoing one or the other.

5.0 out of 5 stars real mckenzies do it again!,
Let me start off by sayin i have a ton of real mckenzies songs on my computer, but had bought none of their albums except this.This CD however, is freakin awesome.The band has really evolved and it shows. They’ve pretty much perfected their formula.If you’re a Mckenzies fan, you’ll love this.if you’re not a fan, you’ll also love it.how can’t you? Fav. songs on here are Pour Descisions, Smokin Bowl,I hate my band, Farewell Nova Scotia. But all the tracks are awesome.no filler whatsoever.i really gotta see these guys live.
anyway get this CD.

5.0 out of 5 stars Blissful Sounds to Soothe Yer Brain,
Another mad offering from the Boys from the Great White North. Move over Rush, Lotus Land has got some new favorite sons and their name is the Real McKenzies. Just buy this cause you’ll be missing out on one of the best acts going currently. Fat Mike from NoFX plays bass and helped produce this record. It kicks much ass with great songs and lyrics, just like all their albums. I love the artwork on this one especially.

5.0 out of 5 stars Great CD,
This is a fantastic CD. Every song is worthy of a listen. The music fits the genre well. The lyrics are pure poetry (Bugger off is sheer genius). I highly recommend this CD. 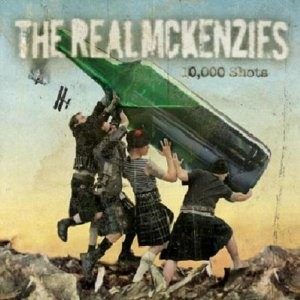