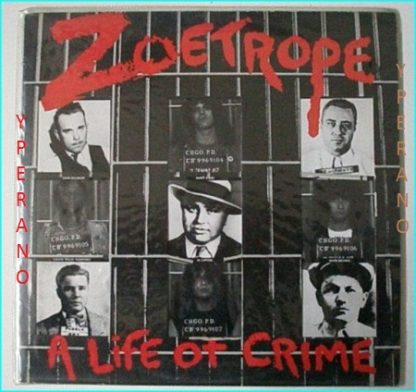 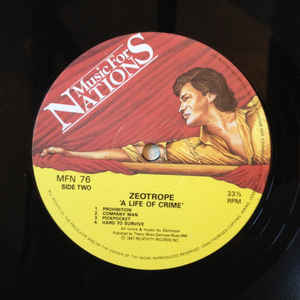 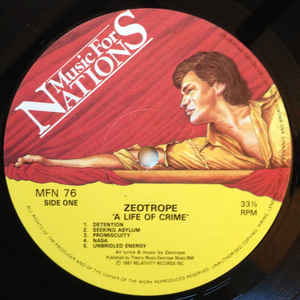 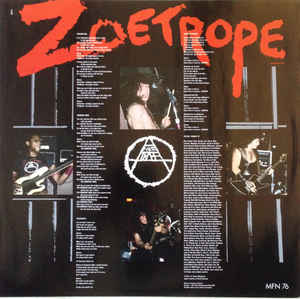 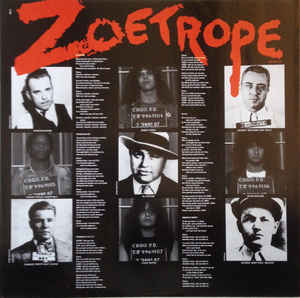 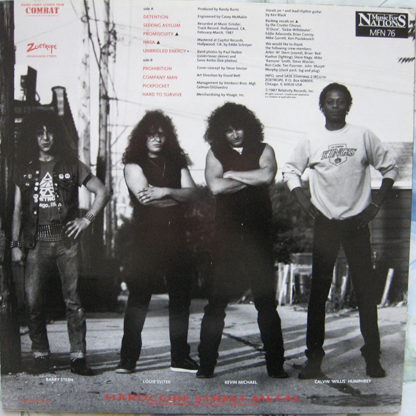 Zoetrope were from Chicago IL, and formed in the late 1970’s. They self released a 7″ep in 1980 called “the right way”, and went on to play with tons of hardcore bands through the early 80’s. By the time this LP came out in the later part of the decade, the band was playing straight up speed metal, with catchyness and tightness. This is my favorite of the 3 decent LPs the band released. The production is perfect. It was rare in the 1980’s for metal bands to have black members (its still pretty fucking rare), and Zoetrope were one of about 4 bands that I can think of that had a black member. My buddy Zoran loved this album, and would always be blasting it on his stereo before we’d hit the streets of S.F. on our skateboards. We’d get blasted, then bomb some hills.

Zoetrope was an American heavy metal band from Chicago, Illinois. Although their sound was akin to thrash metal, the group described themselves as “”Street Metal””
In 1987, the band travelled to Los Angeles to record their follow up, A Life of Crime, with producer Randy Burns (Megadeth, Nuclear Assault). Zoetrope arrived at a time when the ‘Thrash movement’ of the underground was just starting to take place. Fusing the best of hardcore punk and modern rock, Zoetrope developed their own style of thrash they coined “Street Metal” because the lyrical content focused on the underbelly of big city life. Many of their songs  exemplified Zoetrope’s desire to write about the dirt on the street.

Zoetrope’s music was well received by both critics and fans alike and the fact that the group refused to categorize their sound and continued to play on the same same bill as both Hardcore and Metal bands alike actually widened their audience and helped bridge the gap between the two music scenes. I believe Zoetrope’s ties to this crossover movement are underrated since they were one of the first pioneering bands to bridge this gap. The band got their major break when they signed with Combat Records in 1985. I actually saw the band play live several times during this period opening for acts like: Megadeth, Overkill, Motörhead and Slayer.

Subsequently, after the tour for A Life of Crime,  some band members departed the group for other projects: Louis Svitek left to join Billy Milano in M.O.D./(Method of Destruction). He also played in Lost Cause, Ministry, Mind Funk, Pigface, The Hollow Steps and Project 44. Barry Stern went on to join the doom metal band Trouble where he participated on two albums: Trouble (1990) & Manic Frustration (1993). Barry also served as touring drummer for the doom metal band Cathedral. Sadly, he passed away in 2005 from complications arising from hip replacement surgery. Trouble’s 2007 album Simple MindCondition is dedicated to his memory. Kevin Michael put the band back together with a new line up and released Mind Over Splatter in 1993 but the band folded for good shortly thereafter.

Although Zoetrope only lasted a few years, their impact on the Chicago metal scene and the music scene as a whole is self evident. The band found a way to thrive during a turbulent time in metal history and were true pioneers in bridging the gap between Punk and Metal. The albums A Life of Crime and Amnesty are filled with classic metal tracks fans of Thrash, Speed Metal or Hardcore Punk should be exposed to. I recommend the tracks: “NASA”; you won’t be disappointed. \m/

Bullets slam into your eyes
If Amnesty would serve as a Great Train Robbery for Illinois’ Zoetrope, then A Life of Crime was their Godfather, their Goodfellas, their Untouchables, and perhaps the ultimate street metal album of the Midwest in the 80s. That doesn’t mean it was perfect, just a lot better than other bands of the time and place performing with the urban aesthetic, and a leg up on the debut album. There is a bit more hardcore influence on this effort, and it all around heavier than Amnesty, even in the vocals and drums of Barry Stern. There was a single lineup change, as Louie Svitek (Lost Cause, M.O.D., Mindfunk) replaced Ken Black on the 2nd guitar, but otherwise the core remains the same.

“”Detention”” breaks the prison gates with a volley of punkish riffing, enough energy to get the combat boots kicking in the heads of whatever mohawk or longhair was unfortunately to cross their path. It not nearly as memorable as “”Seeking Asylum””, probably my favorite Zoetrope track overall, with an immediately catchy, classic metal riff that you’d expect more from some NWOBHM act that went on to legend. Pounding speed and flurries of unscrupulous leads help round out a pleasurable track that belongs on any compilation of great 80s speed. “”Promiscuity”” is also catchy, with a playful, driving guitar melody that breaks down into a thrash thrust. The song also features El Duce and Sickie Wifebeater of The Mentors doing brief backup vocals, as does the following “”NASA””, an obvious critique of the Challenger disaster, which chugs along with a punky swagger below the occasional lead or melody. “”Unbridled Energy”” is one of the band faster tracks, Stern barking out vocals at a lower pitch than normal, and explosive like a more metal Sick of It All, with some pretty hardcore-styled lyrics. “”Prohibition”” is another fast as hell piece, a tribute to the gangsters of days gone by. The rhythm guitars beneath the lead are fucking intense, as are the leads themselves.

“”Company Man”” is another Zoetrope track to feature a solid Motorhead influence, balls deep rock & roll with some harmonics in the verse and clapping percussion, plus a kickass punk mosh breakdown for the chorus, very catchy. “”Pickpocket”” has a lot of bounce to the bass and a decent, faster paced guitar in the verse, but it not one of the better tracks here. “”Hard to Survive”” compensates with a searing melodic intro and drumming momentum, the melody returning post-chorus as it thunders into the next verse. Rinse and repeat, until Barry Stern screams and the album ends.

A Life of Crime features some truly awesome songwriting, and then a few filler pieces between, which don’t really disappoint, but don’t blow me away either. “”Seeking Asylum”” is so good that I’m surprised it did not gain the band a greater recognition outside the Midwest thrash scene and radio underground, especially with a Combat Records deal in place. But, I suppose sacrifices had to be made in order to afford Anthrax and Metallica concert t-shirts, so Zoetrope never made the splash it could have. At any rate, this is their finest hour, so if you’re checking the band out for the first time, begin here. It a great album for caving someone skull in with a pair of brass knuckles. 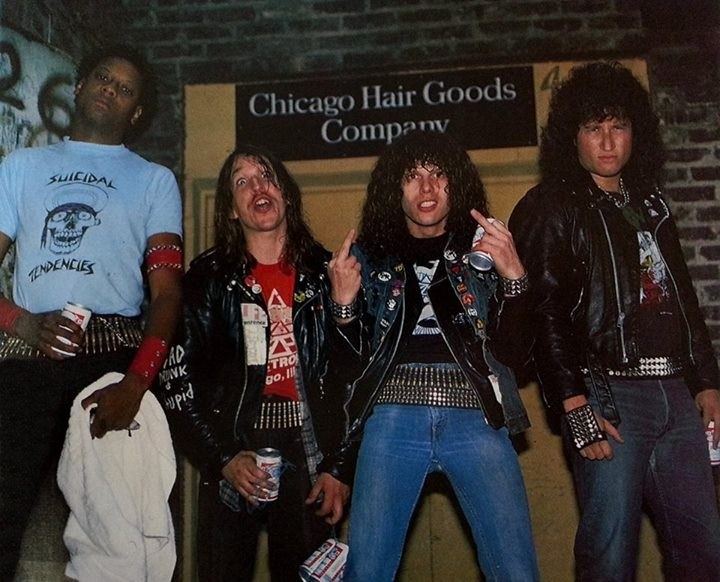