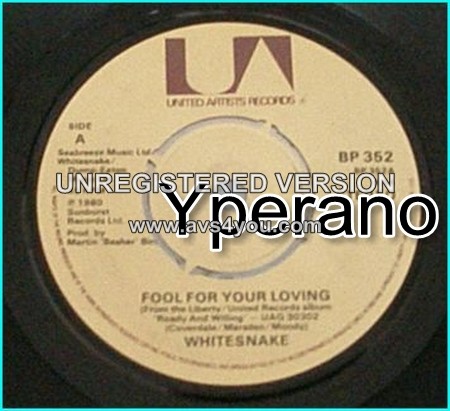 WHITESNAKE: Fool For Your Loving 7″+Side Mean Business+Dont mess with me.No p/s. FREE £0 for vinyl orders of £15+

Whitesnakes Fool For Your Loving is one of the most popular and well-known songs. David Coverdale has stated that he prefers the original to the 1989 version.

Side 1:
Fool For Your Loving

Side 2:
Mean Business
Don’t Mess With Me

“Fool for Your Loving” is a song recorded by British hard rock band Whitesnake. The song is from the bands 1980 album Ready an’ Willing, but it was later re-recorded in 1989 for the album Slip of the Tongue.

Co-written by David Coverdale, Bernie Marsden and Micky Moody, the song was inspired by the break up of Coverdales first marriage. In Firecracker magazine, Coverdale said:
“You can look at my first marriage and see “Fool For Your Loving” and “Don’t Break My Heart Again.” A lot of those were fueled by songs about a relationship that once was very positive but sadly was unfolding into not positive.”
I has also been rumored that the song was originally written for blues legend B. B. King.
The song was the first big hit of Whitesnakes, reaching #13 on the British charts and #53 on the U.S. Billboard Hot 100.
This remains one of Whitesnakes most popular and well-known songs. David Coverdale has stated that he prefers the original to the 1989-version.
A music video was also made, which features the band performing the song live on stage.