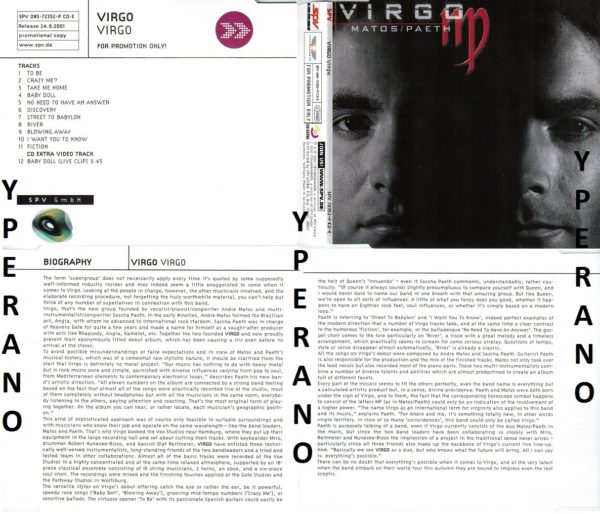 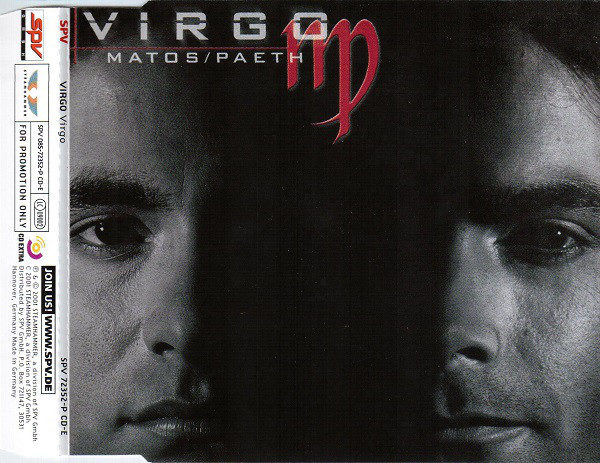 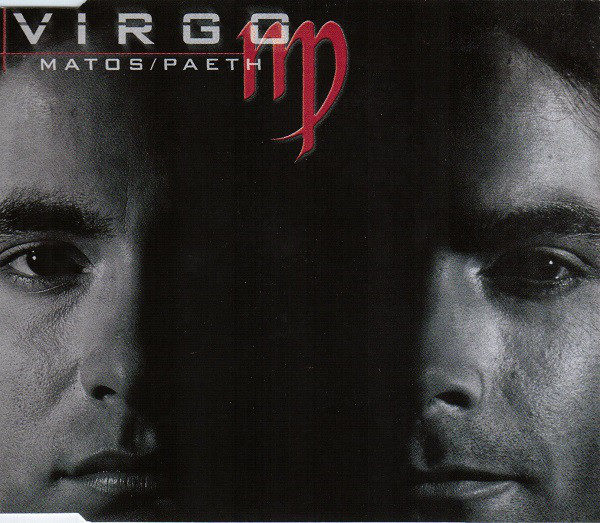 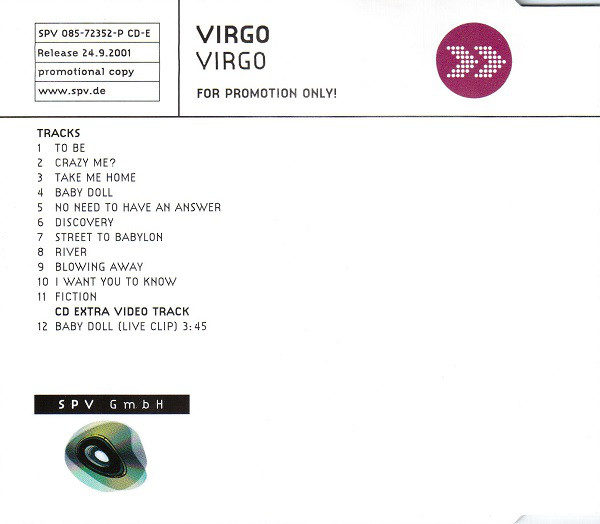 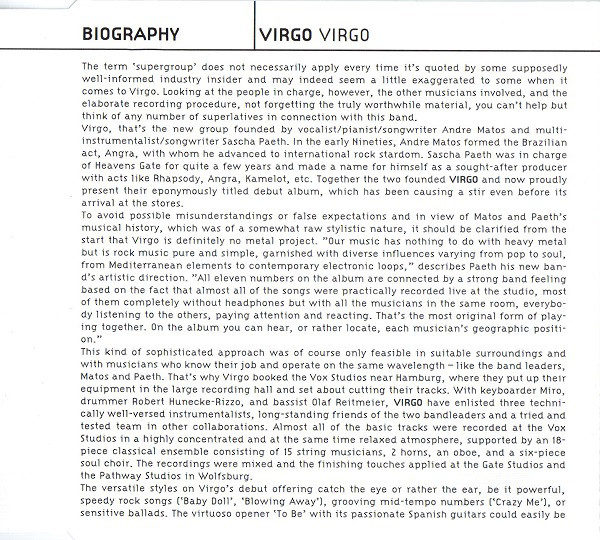 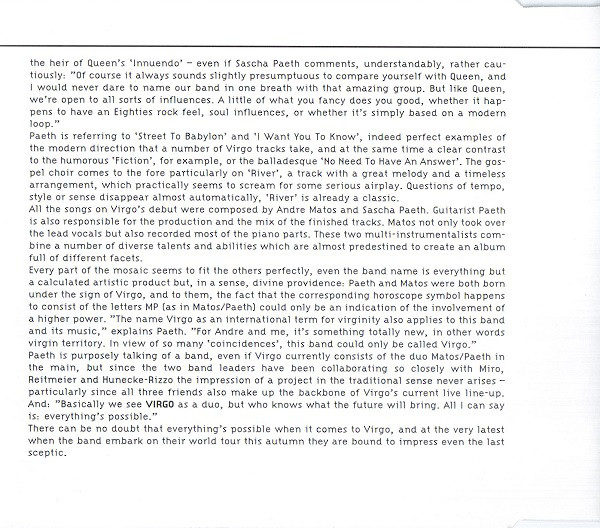 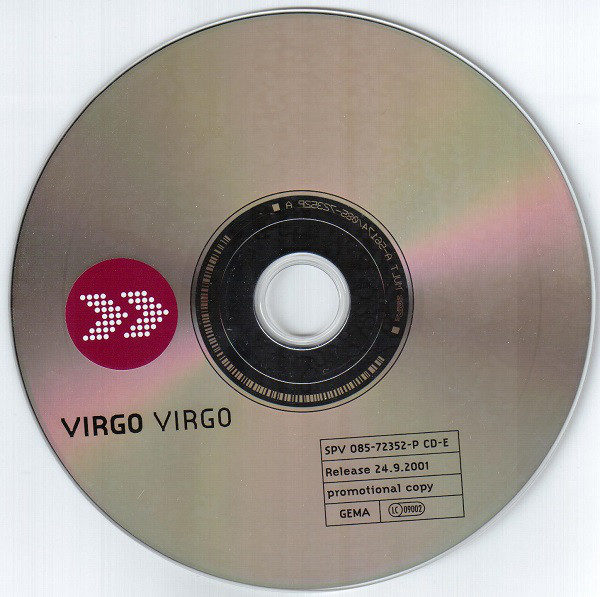 Virgos music is actually a refreshingly original work with eclectic, diverse influences that are masterfully weaved together into a rich tapestry of sonic bliss which always comes across as tasteful and possibly even exotic. Andre Matos has said in an interview (excuse me for not quoting the source) that he never understood why bands have side-projects in the same genre their main bands play and I have to agree with him. To me it is a testament to the adventurous and restlessness of his creativity that Matos manifested in choosing to embark on this path with Sascha. The name Virgo also evokes the idea of “virgin” – something novel that has not yet been done before.

I do admit my bias; Andre Matos is my favourite singer and I have always marvelled at his piano playing. I will cut to the chase right here and say that Matos has done a great job of giving Virgos songs a solid identity despite the amorphous variety of styles Virgos music encompasses. Few singers can match Matoss ability to evoke the emotions their songs carry; fewer still are as versatile.

I must commend the musicians on their excellent song-writing which I feel is the most important aspect of music. While there are no overly-blatant displays of technical brilliance, the songs themselves are immediately accessible on one hand while remaining refreshing and original. The lyrics could have been better (the most criminal moment on the CD to me was the lyrics of To Be – the allusion to Hamlet was contextually erroneous!) but is nonetheless intelligent and insightful. Both the music and the lyrics manifested the great facility at which the songwriters were able to transcend their thoughts and emotions into words and sounds.

Probably the most protuberating weakness I can discern from this album is, quite paradoxically, the guitar sound/volume on most of the songs. Paeth is a great guitar player and he actually has a fantastic skill of communicating his emotions through his guitar, but most of the time the guitar is buried so deep in the mix it is quite difficult to hear it. This is a shame because Paeth has a talent which seems inimitable and, very simply, natural. He makes it sound so effortless. However, perhaps it also shows how mature a songwriter and producer he is. Paeths guitar tone varies a lot throughout the album; for someone who plays he guitar too it seems to me Sascha has this uncanny ability to actualize the sounds in his head onto a record, a skill which has evaded me thus far. He displays a very fertile imagination that, coupled with his obvious technical ability, makes me wonder at what I have been missing out by not checking out his other works.

In conclusion, it is an outright shame that this CD was not promoted as heavily as it should have been. Anyone can enjoy this album even if hardly anyone (probably) can write such unique music, I feel, and I think Virgo may even be the next Queen or Beatles! All right, maybe the dearth of exposure will not make their music as influential as the afore-mentioned bands, but Matos and Paeth are absolutely original, something which I find wanting in most music (of all genres) today. Of course this is not a metal album but please do not pass this up ever if you want to try something absolutely refreshing. One reason you might not like this is Matoss high-pitched vocals; although I personally think few vocalists can match his ability to convey emotions and the “soul” of the song, I understand not everyone can appreciate his singing.

Something unexpected from Andre Matos and Sascha Paeth
Matos/Paeth (or Virgo) was a collaboration between power metal super-producer Sascha Paeth and vocalist Andre Matos (ex-Angra, Shaman). Given Matoss previous work in Angra and Shaman and Paeths work producing bands like Rhapsody, I was expecting this to be a killer melodic power metal album. Well, I got the “melodic” part right, but the rest of the album defied expectations.

First off, this is not a power metal album. Its not a metal album at all, really. Its more of a melodic progressive rock album, like something between Queen and later Marillion. Some of the songs are simple and straightforward rockers, and others are moving, layered compositions that reveal something new each time you hear them. Matos sounds as good as always (though he doesn’t do any screaming here) and he plays piano brilliantly. Paeths guitar work is impressive as well, and hes as able a songwriter as he is a producer.

This ended up being the only Matos/Paeth/Virgo release, though some of Andre Matoss later solo material (which Paeth produced) has a similar vibe. I can’t really recommend this to power metal fans, but if you loved Andre Matos on albums like Angras Holy Land and are up for hearing him in a non-metal setting, this is well worth hearing.

Its not metal, but it doesn’t have to be. Ex-Angra and Shaman vocalist Andre Matos and Sascha Paeth (Heavens Gate) did this amazing project and its absolutely mind-blowing! These two Euro power metal idols have gone for a completely different style on this one experimenting with blues, gospel, some jazz, 60s rock and progressive elements. Matos doesn’t use his high pitched singing on this one and Paeth is far from the speedy melodic riffing. On the contrary there’s a beautiful piano prominent almost in every song and it adds a lot to the overall feel. Its a hybrid of everything non-metal yet its still beautiful. Matos and Paeth should take more of their time to concentrate on this project as opposed to being parts of Euro power metal bands. Virgo is a very understated and elegant project writing great somewhat progressive rock songs of the highest calibre. All kinds of elements from rock to jazz to acoustic passages to blues are present on this CD. And whats more is they are all so very well put together. Its a very diverse album. Highly recommended to fans of Matos and Paeth fans who wish to hear their other musical influences.

5.0 out of 5 stars Its not Power Metal, but it still ROCKS!!,
Andre Matos (former Angra singer and actually Shamans) and Sascha Paeth (Heavens Gate guitarist and Rhapsody producer) join forces to bring us this EXCELLENT album. You will easily hear Queens influences on this work. What style is Virgo? Classic and Hard Rock, Gospel, Blues, a little bit of Metal, some prog rock… Great, just fantastic… For ears that appreciate good music, nevermind it style.