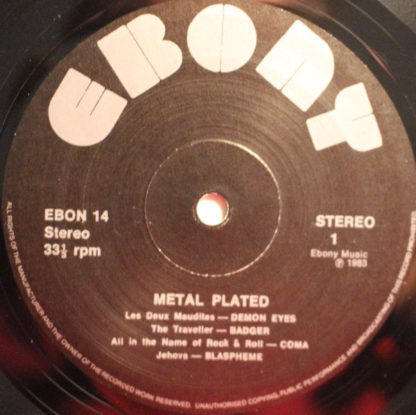 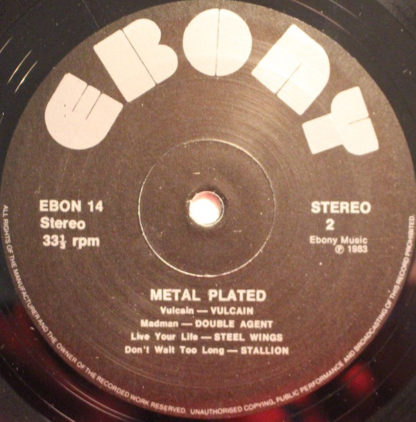 we are pleased to bring you another of the great Ebony Records compilation albums. Ebony Records was one of the classic minor-league labels of the NWOBHM time, focusing on up-and-coming mid-eighties bands mostly from the UK, though a few Euro bands crept in as well. Similar to labels such as Metal Blade, Ebony started out releasing compilations of unsigned acts, a few of which went on to record albums with the label. This particular album is “Metal Plated” from 1983 & features eight bands in all, including four from the UK : BADGER, COMA, DOUBLE AGENT & STALLION, three from France : DEMON EYES, BLASPHEME & VULCAIN, and from Sweden, STEEL WINGS. If you’ve enjoyed any of the previous Ebony comps or N.W.O.B.H.M, you’ll dig this too. (Demon Eyes, Badger, Coma, Blaspheme, Vulcain, Bouble Agent, Steel Wings, Stallion).

VARIOUS – Metal Plated (1983) (Ebony Records)
Ebony Records EBON 14
A1. DEMON EYES – Les Deux Maudites (France)…Hammering Metal, into your head! The energy tops the lack of originality. Different to “Rites Of Chaos” LP version.
A2. BADGER – The Traveller (UK) Some decent twin guitar leads makes this slightly better than your average Rock-Metallers.
A3. COMA – All In The Name Of Rock’n’Roll (UK) Sounds like those early Saxon r’n’r cuts.
A4. BLASPHEME – Jehova (France) Perhaps their greatest song ever, here in a superior version to the one on their s/t LP.

B1. VULCAIN – Vulcain (France) Frances very own Motörhead cloning better than few have cloned before. Or after.
B2. DOUBLE AGENT – Madman (UK) The punk vocals are charming. Chugging hard rock
B3. STEEL WINGS – Live Your Life (Sweden) Pretty fast for boogie-Metal, and it comes with the trademark Scandinavian Metal vocal harmonies
B4. STALLION – Don’t Wait Too Long (UK) In parts hauntingly similar to early Motley Crüe. Decent Hard Rock.

Ebony Records was one of the classic minor-league labels of the NWOBHM time, focusing on up-and-coming mid-eighties bands mostly from the UK, though a few Euro bands crept in as well.
Similar to labels such as Metal Blade, Ebony started out releasing compilations of unsigned acts, a few of which went on to record albums with the label (one notable band that did appear on a comp but later went on to bigger things on another label was Mercyful Fate). Many of the releases were produced in-house by label founder Darryl Johnston, giving several of the albums a similar low-budget style that nevertheless was part of the charm of the NWOBHM period. A lot of the bands released one or two albums. There were a few gems in there, including Savage classic Loose ‘n’ Lethal, while the biggest band to emerge from this label would almost certainly be Grim Reaper, who were snapped up by the major label RCA on their way to a successful worldwide career.

A really thoroughly researched compilation documenting the NWOBHM phenomenon’s rarer out reaches. 8 tracks licensed from rare and hard to find New Wave Of British Heavy Metal songs. This LP will appeal to all metal fans, and aficionados. This is for everyone into rock music history and anyone interested in British music – and culture history. Iron Maiden, Def Leppard, Judas Priest and Saxon all got signed by majors and sold records galore, meanwhile bands in every village across England formed. Inspired by the energy and DIY attitude of the punk scene these acts recorded and released their records all on their own. The music heard on this LP has been treasured only by NWOBHM connoisseurs.

CHECK the STALLION singer or those two songs on the: