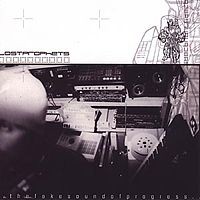 Gold album in the UK, signed to a multi-national.Big success story debut studio album from the Welsh band Lostprophets.

Originally released on November 27, 2000, it was recorded in one week for around £4000, and while originally intended as a demo went on to be released on Visible Noise Records. Much of the album was made up of old demos that only took two weeks to make. Many of these demos came from the EP The Fake Sound of Progress. Songs like “MOAC Supreme” became “A Thousand Apologies” and “Directions” was used as a B-side for their debut single “Shinobi vs. Dragon Ninja”. Because of the albums short recording process, they didn’t think it truly reflected their abilities as a band. This is why they called their second studio album Start Something, as they felt it better reflected their music abilities
Reception to the album was mixed. Drowned in Sound gave the album 10 out of 10 stars and said: Opening song’ “Shinobi vs. Dragon Ninja” is a complete killer. All crushing guitars, furious quirky drumbeats and emotive vocals. And Lostprophets don’t just do ‘heavy’ they do melodic verse and lovely vocal harmonies too.. Singer Ian is a chino style shouter who is able to both sing and shout.
In 2001 the band worked with renowned producer Michael Barbiero to remaster the album, and this new version was released in October 2001. It was dedicated to Steve Cookson, a fan who died in a car crash en route to a Lostprophets gig.
After the release of the album Lostprophets went on a tour in the UK and America. They built up a strong live following with support slots to popular acts like Linkin Park, Deftones as well as several headlining stints of their own. They also took part in the successful Nu-Titans tour with Defenestration and other famous british metal bands. The band subsequently toured with Ozzfest, and also played at Glastonbury and the Reading and Leeds Festivals.