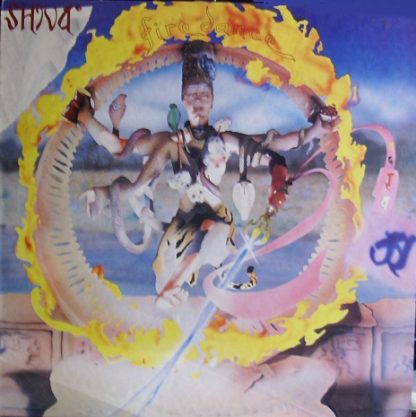 A1 How Can I?
A2 En Cachent
A3 Wild Machine
A4 Borderline
A5 Stranger Lands

“Way way back in 82′ I was a total and utter metal head! Long and hard did I seek the hallowed genre, and many times and often, was looked upon with contempt and even amusement when I entered our local vinyl store seeking albums even then, were deemed obscure and rare!
I usually had to do the dreaded – order and wait! And this album was no exception! I waited and waited for this baby let me tell you! It took effing ages to get to me in fact!
The usual outcome from the above process was an obscure album from an obscure band which due to not being able to pre-hear it, usually left me stuck with a slab of vinyl which was rubbish, and because I had ordered it, expensive rubbish!
However, as I arrived home and chucked this on the turntable I was soon thinking I had somehow done them out of some cash, because this album in every way – was awesome, inspirational and from that day onwards, treasured”.

Why are we not shouting Shiva from the rafters?
Every now and then you make a connection with some early piece of aural obscurity, something you’ve long toiled over but never quite molted with. Suddenly, the realization of genius becomes so clear, as if it were staring at you through a mirror all along. Firedance is one of situations. Far ahead of its time, and almost unheard of by anyone outside the diminishing circle of NWOBHM collectors and old metal explorers. One can only marvel that Shiva were not a raging success. After all, they struck at a time when the waters were right for progressive rock and metal, with bands like Rush and Yes topping the charts and British metal and hard rock exploding into the next big thing.

Shiva possessed both of these characteristics. One might even imagine them the perfect coupling of Rush and the American band Riot, with superb songwriting skills that put the majority of their NWOBHM peers to complete shame. But perhaps this band was just too smart for the period in which it arrived, and tragically resigned to the status of a non-entity, while bands like Judas Priest, Def Leppard and Iron Maiden would soar past them. The tragedy is that they probably gave up too soon. A few more albums like Firedance and it would have been nearly impossible for anyone to ignore them, and with progressive metal labels springing up in the 90s like Inside Out, they would have undoubtedly found a reliable home. But all we have to remember them by are a few demos, a compilation of unreleased material, and this one near masterpiece of a debut album.

Shiva was a power trio by definition, and by that I mean each of the members possessed enormous talent at his given instrument. Chris Logan was a skilled drummer, but never over indulgent here, and Andy Skuse has a beautiful, popping bass tone that never rolls over to play dead for the guitar. Speaking of the six-strings, the true center of the band must be John Hall, who performed both the vocals and guitars, and has quite a good run with each. His tones were sweet, clear and smooth, characteristic of many peers but not so sharp or piercing as a Kevin Heybourne (from fellow NWOBHM power trio Angel Witch). No, he reminds me quite a lot of Geddy Lee from the 70s Rush recordings, and his selection of notes is always teeming with life, perfectly married to the cycle of classic metal riffing and bluesy leads that lie beneath. The result is an album, Firedance, which would appeal far beyond the core metal fan of the day, to the lover of blues, progressive rock and perhaps even folk rock. Fly By Night meets Fire Down Under? Sign me up.

Shiva never forget that they’re a metal band first and foremost, and tracks like “How Can I?” and the amazing “Wild Machine” display a strength in creative, accessible riffing that moves beyond some mere mutation of Judas Priest, Sabbath and Deep Purple. Not the sinister groove that hangs at the end of the verse of “Wild Machine”, before a robotic voice heralds a most glorious silent chorus’ riff. “Borderline” shows a little more of a roadster spin, as if it were Shivas take on something like “Living After Midnight”. The vocals are superb, and they’d be alluring enough without the excellent guitars. But you are gifted with both. “Stranger Lands” journeys further into the realm of progressive rock, with a carousel of Skuses wonderful lines. “Angel of Mons” is drifting and desperate, and “User” burns with the heat of molten, classic metal. The bands namesake “Shiva” is another impressive offering, with a crazy synthesizer break near the finale that immediately lifts the imagination above some creative percussion.

The band accomplishes all of this without the inflated, excess song structures that many prog rockers were often guilty of. This is no Tales from Topographical Oceans, its constantly aware of its status as a hard, driving rock record, but one of a positive life affirmation more than morose infatuation. Its not so mystic as to become psychedelic, but its sure to deliver the goods that a Rush fan demands from anything that band carved out in their initial decade of output. Well worth tracking down if you fancy other prog/NWOBHM crossover acts like Saracen or Budgie, and though it nears 30 years in age, its highly enduring.

The NWOBHM scene back in the days was quite a mess. You had literally hundreds, if not thousands of bands coming and going, most leaving not a mere trace of their temporary existence.

Then again for such a vast array of bands and records there are more than a few worth giving your time. Firedance is the only full length Shiva came up with.

The stereotypical New Wave of British Heavy Metal band played simplistic, catchy and up-beat brand of metal that one you could sing along to, down a few (or more than a few) pints and bang your night away while riding a motorcycle.

Compared to their contemporaries Shiva shows more late 70s hard rock influences, with acts like Purple and Blue Öyster Cult not too far away. They show a touch of 70s progressive rock, although not overtly and sometimes, like on Wild Machine, it sounds like Ozzy is on the mike. On its own a great track, it evokes slight visions of what Count Raven at times would do much much later.

Firedance is more hard rocking and less metallic than some other NWOBHM albums such as Di’Anno-Maiden, Angel Witch or Denim and Leather. Shiva were by standards of their musicianship and songwriting very much on par, they are truly pleasant to listen to.

Production aspects of the album are also good for the ear. I personally don’t like the glossy plastic that the 80s brought with it to metal music, thus the dry mix of Firedance is fantastic.

On overall, if you hold more than random interest for NWOBHM, Firedance is a good record to check out. It won’t hold anything revolutionary. There are easier and slower moments where the band derails a bit, the album screeches alarmingly half-way, but the band maintains their grip all the way through. If you like Diamond Head or Quartz brand of NWOBHM, I would recommend Firedance.

Be the first to review “SHIVA: Firedance LP + inner with lyrics” Cancel reply