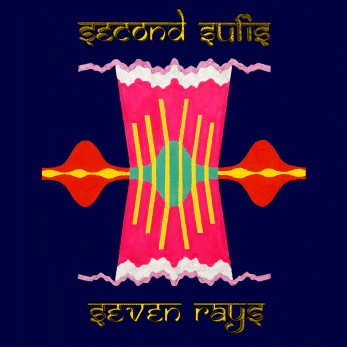 1. The first track, Soil of Contentment, emanates saffron-colored rays of happiness experienced however briefly when finding oneself at ease, at home, at one — just being. This piece may foretell Second Sufisâ move to the countryside studio/residence that happened one year after the date of this recording, something that would have seemed like a dream at the time.
Jerome Pier – keyboards and rhythm sequence, James Mott – chapman stick, Mike Gorman – guitar

2. Taken in the positive sense, Annihilation is the extinction of the conditioned self referred to as liberation or enlightenment. Another sense is in flaming dreams of desire scored by martial drums and battle-hardened strings marching toward that final confrontation on the Har-Meggedo plane. Taken in either sense, the flame grows brighter just before itâs finally quenched. What is left in the smoking embers of the annihilation?
James Mott – chapman stick, Mike Gorman – guitar and drum loop
3. The Seven Rays refers to a mystical state where one sees the universe differentiated into discrete levels of vibration. At first a cacophony of discordant sound, the title track splits like a gem into fractal melodies of iridescence and light. For a brief moment, the dream reflected in the crystal becomes clear, but the image scatters when we try to comprehend it.
James Mott – chapman stick, Mike Gorman – guitar and drum loop
4. Transit describes the indigo twilight between one state and another, not a state itself but a condition of transition. We think of ourselves as moving intact from moment to moment. But one departs on that journey and another arrives, with motion and change being the only constants. When we get there, will we remember why we came?
Jerome Pier – keyboards and rhythm sequence, Mark Greeno – guitar
James Mott – chapman stick, Mike Gorman – tablas, assorted percussion
5. Sun Zero expresses the primitive absolute. The moment at the beginning or end of time where matter, energy and all modes of vibration lose all distinction as they spiral into a coil of infinite intensity. Heaven, after a few days, is not so great. After a few days you get used to hell. Another destination, Sol Absolute, lies between the poles where white heat resolves all disputes and the smoke from it goes up for ever.
James Mott – chapman stick, Jerome Pier – tablas, Mark Greeno – guitar, claves, and bones,
Mike Gorman -drum loop, slit drums, dhumbek, and aklung (bamboo chimes).
6. Somewhere in the 20th Century floats in a blue-gray video cloud where forgotten newsreels spin with their leaders flapping. Resistors spark and coils hum under the flicker of Neon discharges within the glass, chrome, and wire machine without even a ghost left inside. Is this where we came in?
James Mott – Musicman Bass, Mike Gorman – guitar and drum loop
7. Space Ghost is the clear ray that shimmers silver against the cold blackness of a galactic void scattered with faint ribbons of cosmic dust. What cold external logic writes its asymmetric name across the sky and dictates the grainy pattern we call here and now? The last eight minutes of the piece are looped.
James Mott – chapman stick, Mike Gorman – guitar and drum loop “ 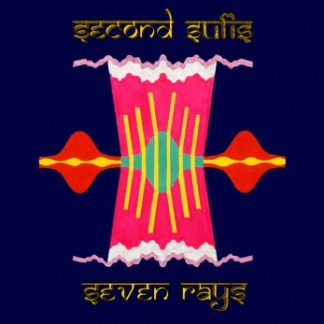