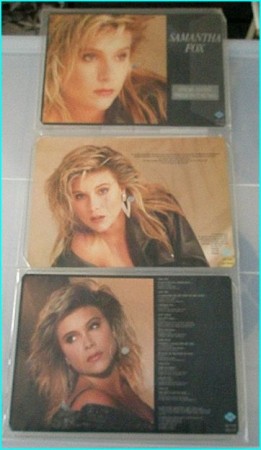 Issued in 3 rectangular picture discs. Each side has the capacity of a regular 7″” record. Housed in three-pocket PVC sleeves

Special Edition Triple Picture Disc Jive HIP 0 48A to 48 F. It actually has 6 sides. They come with the original heavy clear plastic folding display envelope. The discs are rectangular and look like they could be vinyl 45s (they are not CDs). Issued in 3 rectangular picture discs. Each side has the capacity of a regular 7″” record. Housed in three-pocket PVC sleeves.

Side 1 – I Can’t Get No Satisfaction
Side 2 – I Surrender (To The Spirit Of The Night), I Promise You
Side 3 – Naughty Girls, True Devotion Written By Lol Mason (Laurence Edward Mason) remember City Boy – The Day The Earth Caught Fire? See title below!
Side 4 – Nothing Gonna Stop Me Now, If Music Be The Food Of Love
Side 5 – That Sensation, Dream City
Side 6 – The Best is Yet To Come  Written By Andy McCoy from Hanoi Rocks
The picture of the item in the listing is the actual item that we will ship to you.

Samantha Fox is the second full-length album from British model-turned-singer Samantha Fox. It was released by Jive in September 1987 and charted in the United Kingdom at number twenty-two, United States at fifty-one (gold), Canada at forty (platinum), Australia at eighty-six and Germany at sixteen.
After her first album went gold, Samantha returned to the studio to record her self-titled album. She enlisted help from producers and music group Full Force, who were helping Lisa Lisa at that time, to produce some of the songs on the album. This album combines rock with freestyle and pop. She had hits with “Naughty Girls (Need Love Too)”, “Nothings Gonna Stop Me Now”, a cover version of the Rolling Stones’ “I Can’t Get No) Satisfaction”, “I Promise You (Get Ready)”, “True Devotion”, her first ballad song, and the rock song “I Surrender (To the Spirit of the Night)”.

5.0 out of 5 stars Pop goes the Fox! Sophomore effort is brill!,

The majority of the tracks was produced by Steve Lovell and Steve Power, and with the exception of two tracks, showed Foxy moving more towards a pure pop direction, ditching the rebellious slamming rock-keyboards from Touch Me in the dust bin.
Yet theres a final bow at the latter style, from the second single, “I Surrender (To The Spirit Of The Night)”, whose guitars and keyboards, thumping drums, and rhythm mimic “Touch Me”. I can imagine that this or the “Touch me” song were candidates for Foxys breakout single and “I Surrender” lost the coin toss. Theres still a lot of energy in this number though.

“I Promise You” demonstrates Foxys shift to really skippy bubblegum pop. Lovell and Powers production is just as infectious and the chorus has a tempo and intensity to match.

Then comes “Naughty Girls (Need Love Too)”, her second big hit in the US–where she dips her toe in the 80s hip-hop of Full Force, who helped out Lisa Lisa and Cult Jam. She would do some more of this in I Wanna Have Some Fun.

“True Devotion” sports the same synths and haunting atmospheric sounds as the Cars’ “Drive”, and I often compare the two. Theres a cogent comparison in this line: “Yesterdays dreams like old magazines/they lie beside the bed.” She can handle ballads well enough, with the limited depth of her voice.

Whether one will like her slowed down version of the Stones’ “I Can’t Get No Satisfaction”, with backing soulful vocals and some grinding guitars and funky synths will depend on if one is a Stones fan first. I like the original better, but I can handle Foxys one as well.

“Nothings Gonna Stop Me Now” has Foxy opening a pack of Stock-Aitken-Watermans bubblegum, and she blows Bananarama-sized bubbles with it, not as big as “Venus”, more like “I Heard A Rumour.”

Thanks to “If Music Be The Food Of Love”, I’ve referred to the Bard as Willie The Shake in this playful song that injects well-known quotes from Shakies plays. The Bard would probably be clawing at the inside of his coffin hearing “To be or not to be/it doesn’t matter much to me (thats right)/Wherefore art thou my Romeo/the only boy I want to know (hes mine).” Well, tear away, Willie.

“That Sensation” also produced by Lovell/Power, is another three figure BPM dance tune like its sister track “I Promise You.” Kylie would’ve done this as well, but sans the guitar.

The sobriety of broken dreams and hopes is portrayed in the dark gloomy “West End Girl”-style pop of “Dream City.” “Is it the world that wants an audition?/Is it the world that wants a job?/Lean on a corner called ambition/Wait for whatever comes along” I also sense the aura of the high unemployment of Thatcherite England. Yes, “One night in Dream City/its unkind, its unreal.”

Another haunting ballad, “The Best Is Yet To Come”, which aptly describes her next album…(but not the fourth one). Again, drinking ones worries and dancing to music from the stereo seems to reflect the hardships of Thatchers Britain. Its just funny how it pops up in songs like these. Even better than “True Devotion”, this one.

Giving Foxy coordinates to Galaxy Bubblegum was a choice move, although it probably alienated her early fans, who warped away from her. Yet the UK Top Five “Naughty Girls” and “Nothings Gonna Stop Me Now” shows that was far from the case, as she probably gained a new audience. This outdoes Touch Me as she easily acquits herself on the new material. The next album would be even better!