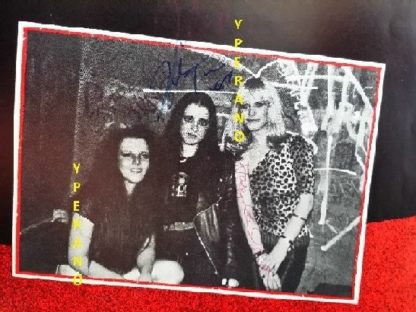 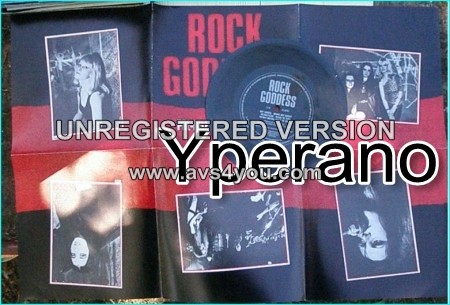 SIGNED, AUTOGRAPHED, by all members!! (Guitar players’ signature on the far left is not visible in the picture, but it is there if you look the actual poster carefully. The other two signatures are easy to spot).

includes Free Flexi-Disc & PosterThis is the Rock Goddesss self-titled 1983 debut album, a fabulous record, full of catchy, compulsive, classically British rock songs and blessed with Jody’s raucous, high-powered vocal delivery.
Rock Goddess were out to give their all-female rockin peers Girlschool one hell of a run for their popularity. These girls meant business, Rock Goddess tackled each song, each riff, each axe attack with cool, powerful precision. Jody Turners vocals are sweet, savage and gutter rich, but the real star in minuscule drummer Julie. Technically straightforward, physically unyielding, she batters around her double bass-drum kit like a herd of enraged elephants.
Producer Vic Maile (of Motörhead/Girlschool fame) produced their four-track demo tape. On the strength of a performance at the 1982 Reading Festival, A&M Records signed the girls. Their first single was the preposterously titled Heavy Metal RockNRoll in 1982, and they followed it up with the My Angel 45 and their debut album, a year later.
Its amazing to recall that Rock Goddess were forced to cancel a tour with UFO around the release of their debut single, because drummer Julie still had to go to school. According to the law she was only allowed to play six gigs in a row and the UFO tour lasted for eight consecutive days. The girls first album has stood the test of time extremely well.

5.0 out of 5 stars Rock Goddess,
When anyone says women can’t play hard rock music,they hadn’t heard Rock Goddess, this band should have gone down in history, they didn’t, but its still a superb hard rock with songs that will have you throwing your head around Waynes world style. Order it, listen to it, you’d be surprised

5.0 out of 5 stars hairy mental sausage rolls,
lacked ambition? no way ,Goddess had the ambition of three bands.their lack of success lay in not being given a higher public profile by A&M ie not being promoted thouroughly.this is classic rock / heavy metal .buy it

5.0 out of 5 stars The best all Girl Heavy Metal Band Ever,
Rock Goddess failed to reign as queens of the NWOBHM for no other reason than a lack of ambition. They were the best all girl band out there and each subsequent album leapt forward in quality. This their first  has a raw edge but has some fantastic anthems. Buy it now and relive the late eighties London heavy metal scene. I remember many nights in the Marquee club, Wardour Street banging to these girls with fellow heavy metal fans who had travelled from all over England to this small club just to see and hear this special music and band. Such a shame they never got the recognition they deserved.