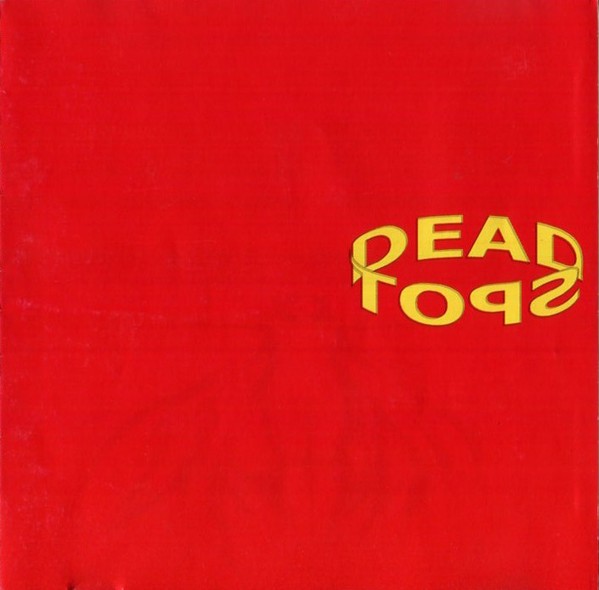 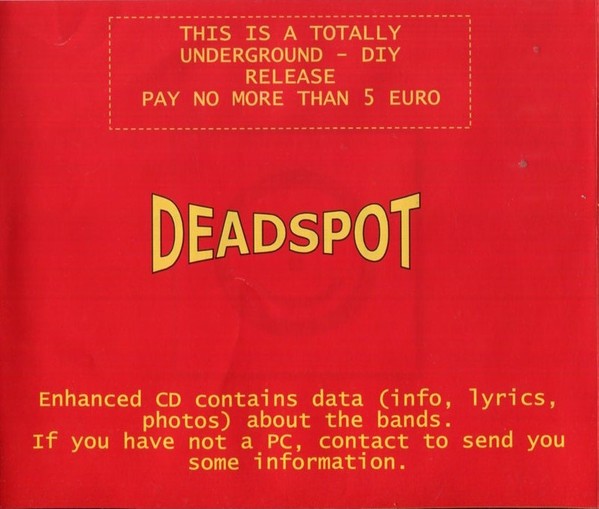 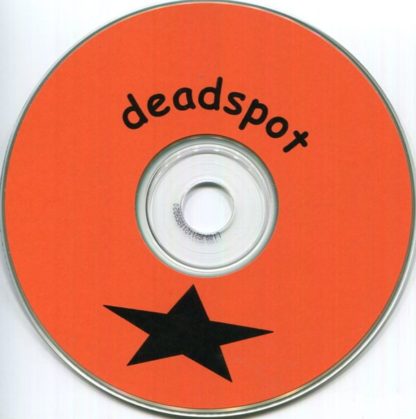 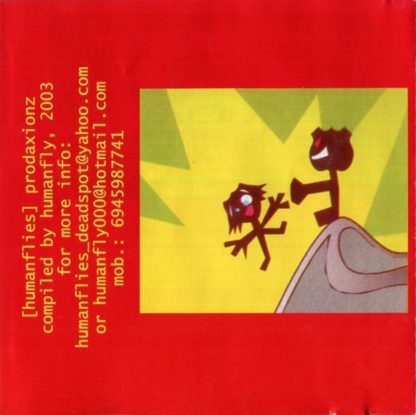 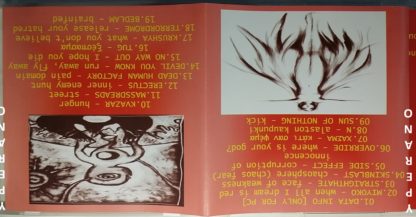 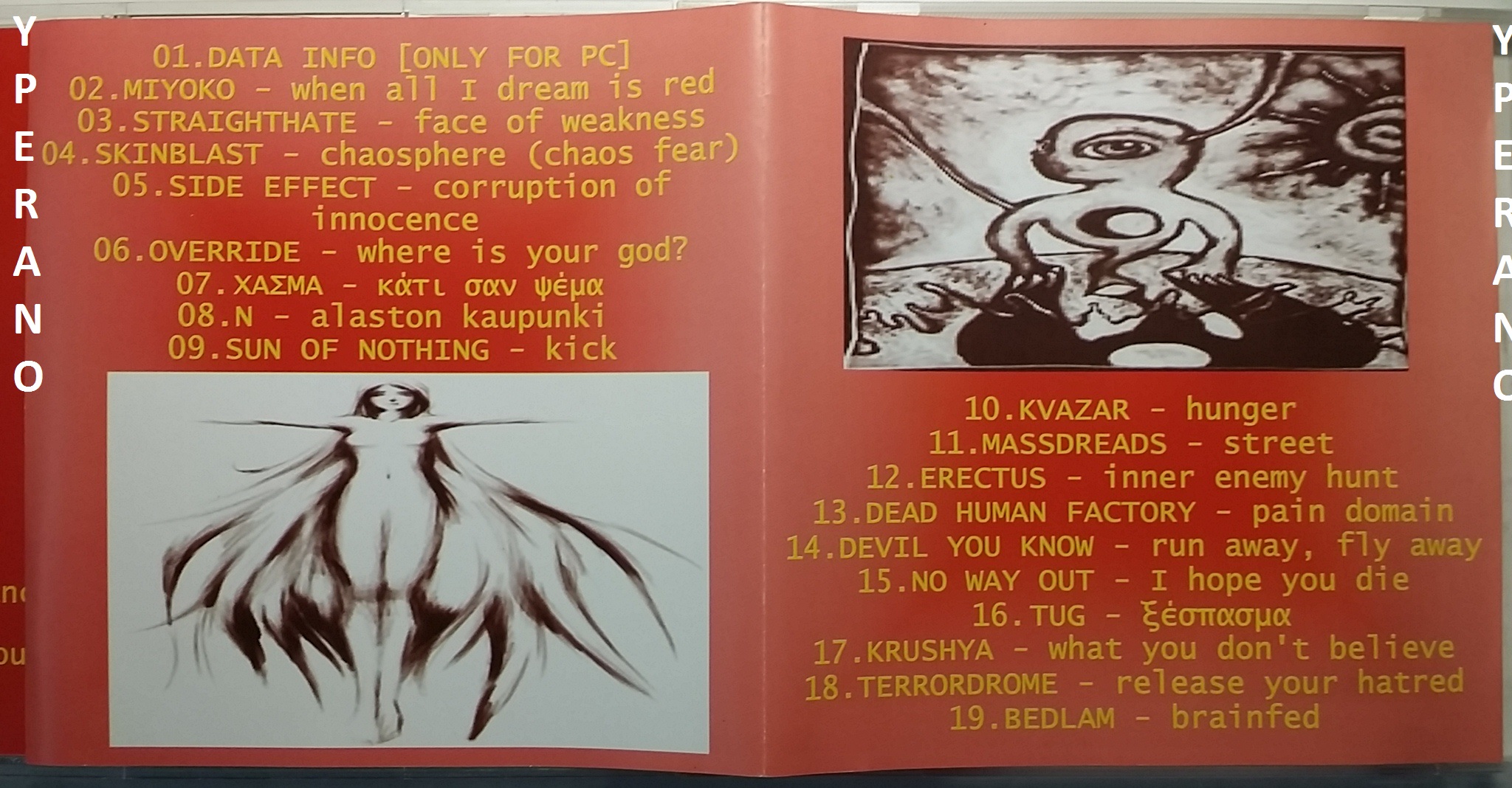 This is a DIY metal compilation from Humanflies Productions consisted of underground metal bands from Greece (and one from finland) mainly death metal, two exceptions are the punk band Hasma and electropunk one man band TUG.
Humaflies was managed from a member of the Diy Metal band Disharmonic from Volos, greece.

“DeadSpot” is a collection compiled by Humanfly. Behind this pseudonym hides Apostolis, lead singer of Greek Disharmonic The aim is to give unknown bands a chance to show off. That alone should justify the purchase in advance of the CD. Support the underground is very important, do not forget it!

this CD leaves things as they are, but it contains a track for PC including information on bands present. There is also a section of links and acknowledgments

Now to comment on the CD, but remember that the track for PC occupies the first position.
I Miyoko is a quartet of Athens. The song is titled “When All I Dream is Red” and is from the album “Two Side To Every Story” (split with Point Zero). This is a rather aggressive metalcore track, whose component hardcore is very accentuated. There is a song too fast but has a fairly rough. This comes from the sound of guitars and ultragrezzo S. , The singer, screams so exasperated. A good start, no doubt about it. The type of music they make, could be part of the team Alternative Tentacles.

The Straighthate are also Greek and the song presented here is a preview of the MCD “Grim Memories”. Its called “Face Of Weakness”. The recording quality and production are certainly better than the previous track. This goes to the full advantage of the power and cleaning. The voice is a shrill scream, often supported by backing vocals. The track is fast and heavy instruments: the thrash element is dominant.

Also from Athens Skinblast. This trio is quite technical, with vocals and guitars from the depths lowered. Setting of death, “Chaosphere (Chaos Fear)” is a song without compromise, that does not look at anybody. Although not original, it must be said that they casino to be three! The track is taken from the upcoming “Place Your Hate.”

The Side Effect are also from the Hellenic capital. The song that represents them is “Corruption Of Innocence” homonym demo. The sound is very heavy, guttural cries to the voice alternates. Very interesting text of social criticism. Stamos cries all his anger sull’inquietante basic guitar / bass / drums. The song is also distinguished by the parties or arpeggiated bass only.

Athenians Override have a nu-metal sound. Quality music, especially when the melody is sung by two voices. In these moments the sound is personal to the debtor even if the American example. But when the singer starts screaming here is that personality is a little hidden ‘from the shadow of Slipknot. “Where Is Your God?” (From the demo “Not A Game”) is still a technical track that bodes well for the future of the band.

Hasma play a punk / hardcore very melodic . The voice is clean and is often supported by choruses. The language used is the greek and the song is titled  “kati san psema”

And now the only non-Greek band of the entire compilation! This is the Finnish N, represented by the song “Alaston kaupunki” (from the demo “Hautasi Naytraa Kauniilta”). This quartets sound is very raw and industrial voice is practically rappata. Say you are a kind of Biohazard on acid. The band is at pains to say that almost all the texts are antiviolenti.

leave the land of a thousand lakes to return to Athens. The Sun Of Nothing are authors of a very slow music, sounds great. The Kyuss are the muse of this group: it is sung by a voice of stoner strange. The track is titled “Kick” and will appear in the album “Sun Of Nothing”.

And now the turn of Kvazar from Thessaloniki. The disturbing “Hunger,” from self titled demo, is a death song of a certain technical level. Very tight, has its strength in the singing of Billy S. who performs in different types of vocals.

Massdreads perform with metalcore “Street”, the demo “Unreal An Expression Of Life”. All were normal. This is a song that alternates rhythms and vocals are so dear to the crossover, and then launch into sudden bursts of violence. Too bad the recording quality is rather poor. The value of the musicians remains unchanged.

from Thessaloniki Erectus “Inner Enemy Hunt” deathcore with their load of protest. The CD cover “Civil Disobedience” is a manifesto against American imperialism. This is a very lively song, heavy on the right.

Dead Human Factory is a quartet whose peculiarity lies in having two young ladies. In this case, a bass and the other as a vocalist. It is a tortured voice like few. The song “Domain Pain” is nothing but a piece of healthy violence. And ‘present in the split with Skinblast titled “Skin Of Dead Human”.

quartet called Devil You Know (from Kamatero / Gerobouno, Athens) is the author of a very melodic metalcore, thanks to the beautiful Alexandros item. The sound is very clean and the technique is functional. And ‘warning more than a nod to classic metal. “Run Away, Fly Away” is a great song from the demo is “Devil You Know”. A perfect combination of tradition and new trends. Well done!

Then No Way Out, with the song “I Hope You Die”, dabble in a genre very melodic and clearly inspired by American. Too bad the recording rather leave to be desired, making the sound mushy. This quintet Athens still proves adept at creating atmospheres pandering.

Tug are a crossover band that uses the Greek language. The song “Xespasµa” (Xespasma) is a rap conceived on two samples taken from songs by System Of A Down: “Suggestions” and “War?”. In my opinion, this is the best song on this compilation.
Check what Tag have to say:

Krushya is a classic good-metalcore band level. From the demo that bears the name of the band has been extracted “What You Do not Believe.” The song structure is complex, cheating death and thrash roots. Surely it is one of the best episodes of all adrenaline “DeadSpot.”

Behind the fearful name Terrordrome hides a violent trio of Thessaloniki. The song in question is called “Release Your Hatred”, the demo “Intravenous Multiplication”. It is a brutal deathcore, extremely aggressive. Good song that has, among other things, a bell’assolo only concession to the melody.

Finally Bedlam from Volos with the song “Brainfed”, from the demo “The Tongue Swallow You” is a kind of obsessive grindcore, ill. The sound performance is poor but the composition is so run to make this band a must. A trace of hostility incredible wild screams from the torture chamber.

What do you think deserves “DeadSpot”? I think it deserves attention because the bands are all made ??of good value. There are no bad songs.
This compilation is also a rare opportunity to hear these bands. Many of the bands present here do not have website, others do not even have an e-mail. Thanks to the efforts of those who took care of this selection can be talked about music. And this is the most important thing.
not matter if theres a brilliant track. These groups deserve to be heard honest. Many of them are superior even to bands that have recording contracts already. For the initiative and the quality, honesty, and consistency, “DeadSpot” deserves the highest rating.

In conclusion, some of the best songs in this compilation come from the following bands:
TUG ??xespasµa From Patra ===> top song
BEDLAM brainfed From Volos
DEAD HUMAN FACTORY pain domain From Lavrio
DEVIL YOU KNOW run away, fly away From Kamatero / Gerovuno (Attiki)
ERECTUS inner enemy hunt From Thessaloniki
KRUSHYA what you dont believe From Patra
KVAZAR hunger From Thessaloniki
MASSDREADS street From Agios Stefanos Attikis
MIYOKO when all I dream is red From Ilissia, Athens