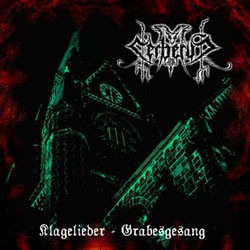 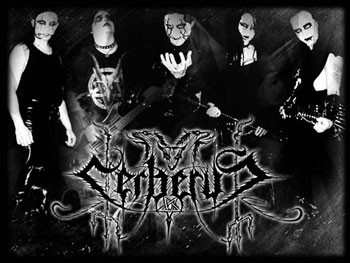 This Black Metal band has expanded the line-up with a guitarist, and replaced the bass player, and in the nickname of that latest person lies the name of the genre that has gained a substantial influence on Cerberus  music: doom
Opening  Blackend  starts the album as if there is a brake on it, and  If Frozen Fire Falls  has an old school thrash opening, but then finishes in the style that has come in very prominently on this  Klagelieder: Grabesgesang  doom!. In both songs it is clear that Beleth has chosen to sing more with a death metal grunt in stead of mostly the raven-like screaming usual in black metal, yet the guitars are still tuned in that typical harsh black metal style, with high leads that are very close to doom metal. Doom is also strongly present in other songs, such as the title track for instance. Somehow, the way Cerberus mixes these styles within the same song, does take the sting out of the compositions. You might say that this album can shortly be described as a black metal act developing its course towards My Dying Bride, including those typical grunts. Often the band blends various genres into one song; not as one integral part, but by putting together passages of the various genres. It is a mix indeed of different styles.