The title tells mostly everything you need to know what this album is about. This band would refine their sound on further releases in favour of a more accomplished musicianship and ballads, thus softening to a point I no longer liked them. Absolutely not the case with their 2 essential first records, which are brutal traditional metal performed like a sledgehammer, with only hints of the subtlety to come.

Baron Rojo became one of the very few Spanish metal bands to achieve any notoriety outside their native country — their early albums had a definite NWOBHM flavor that garnered them some critical praise and success in England at that time. A bit like a of Saxon-come- Motorhead. Well worthy!
Pais: Espana (Spain)
Genero: Heavy Metal

Baron Rojo are one of the most famous heavy metal acts from Spain, and one of the few to garner attention in non-Spanish speaking countries. There is actually a version of Volumen Brutal that has the lyrics sung in English. I think the vocals flow much smoother in the Spanish version because that’s the way the songs were intended to be sung.
Incomunicacion introduces the album with a big ass riff which leads into a speedy verse overflowing with smoking energy. Then, the tempo gets cut in half for the gnarly chorus riff. What a memorable riff this is! Baron Rojo definitely had an ear for tasty, original riffage. Incomunicacion [Isolation Ward] is just a great slice of heavy metal, period. My other favorite on Volumen Brutal is Resistire [Stand Up]. This one is a speed anthem of defiance. If the chorus refrain doesn’t have you yelling along, then you, my friend, are dead inside.
The English version came out on Kamaflage Records (United Kingdom). 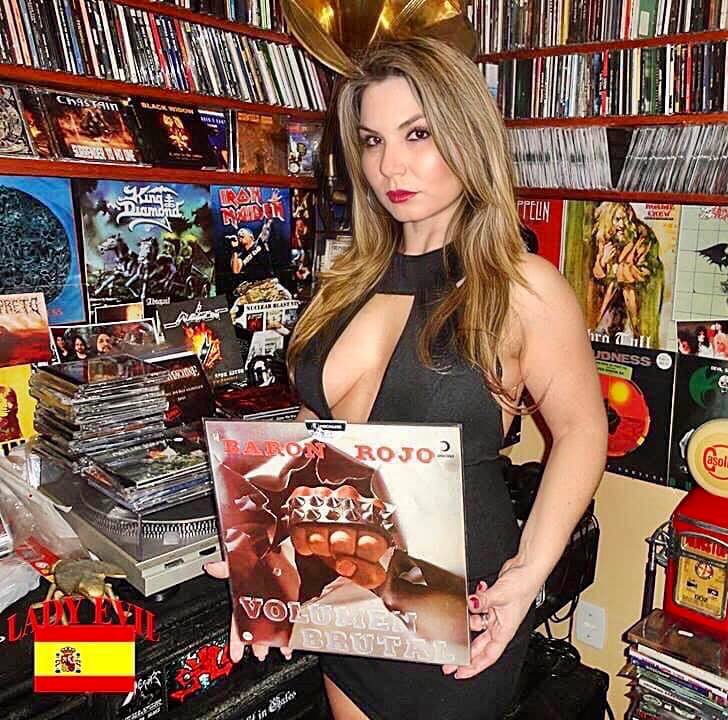 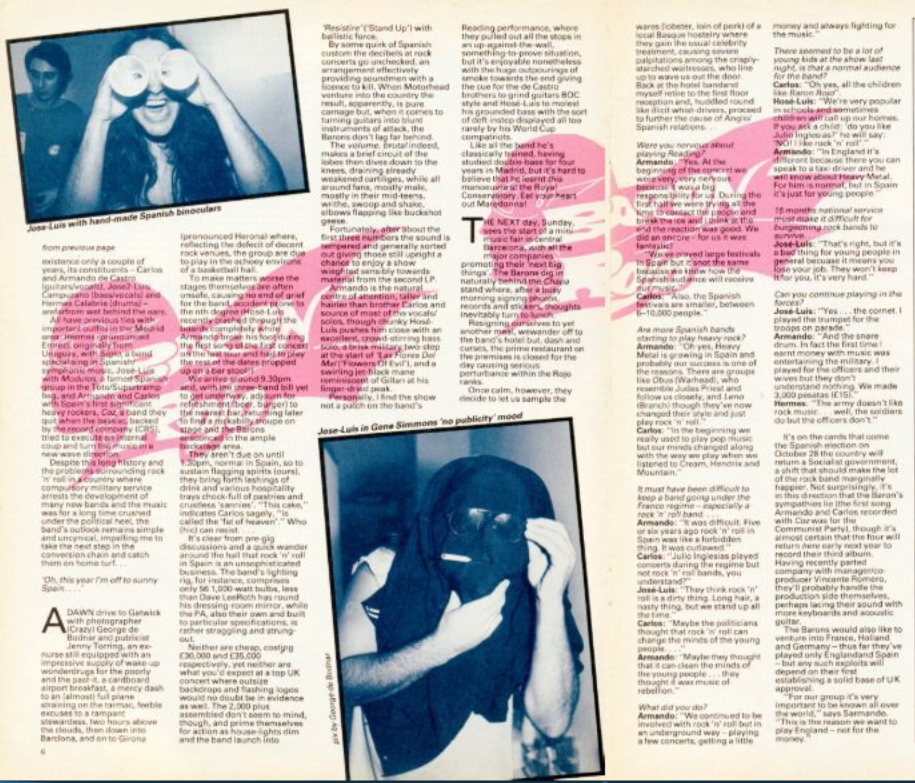 If there is one thing that all the members of the group stand out for, it is the weight of the responsibility involved in performing at a festival like that. An extremely stressful situation that was aggravated by last minute problems, such as the fact that the driver got lost on the way to the festival, causing the group to arrive late for their performance. In fact, they were already crossed off the list and if it hadn’t been for Bruce Dickinson insisting the show manager wait ten minutes, BARON ROJO wouldn’t have been able to play Reading.

All the stress and tension of those moments were clearly reflected in the performance that was recorded in a very poor bootleg, which without being, as I say, much, at least serves as a testimony of his performance. The adrenaline generated by going out on stage like someone going out to fight in a ring, resulted in songs played faster than ever and the songs, where they are already good, earn even more points.

From “Stand up” (? I will resist?), which was the song with which they opened, until ? The Poor? (?El Pobre?) with which they finished the performance, they knew how to give a real lesson in their mastery and tables, even though they had many handicaps to overcome, such as being a foreign band, when in those days throwing cans at the Non-British bands was a tradition, or the language barrier was not an obstacle in this case.

All the songs were sung in English and you can also see the effort and work that they had dedicated to them. Most of the show was based on songs from ?Brutal volume?, ?Concert for them?, ?Rockers go to hell?, ?You are telling me? where between Carlos and Sherpa they make an incredibly good variation for two voices on the last chorus, or ?Flowers of evil?. Although the group’s first album also had its echoes, with the aforementioned ?The Poor? or ?Long live rock and roll?. They also leave a small space of time for Hermes Calabria to show off in the final section of the instrumental ?Baron flies over England? , although the one who took the street journalists and obtained the particular reviews of him was Armando de Castro whose work with the guitar they described as “simply incredible”. 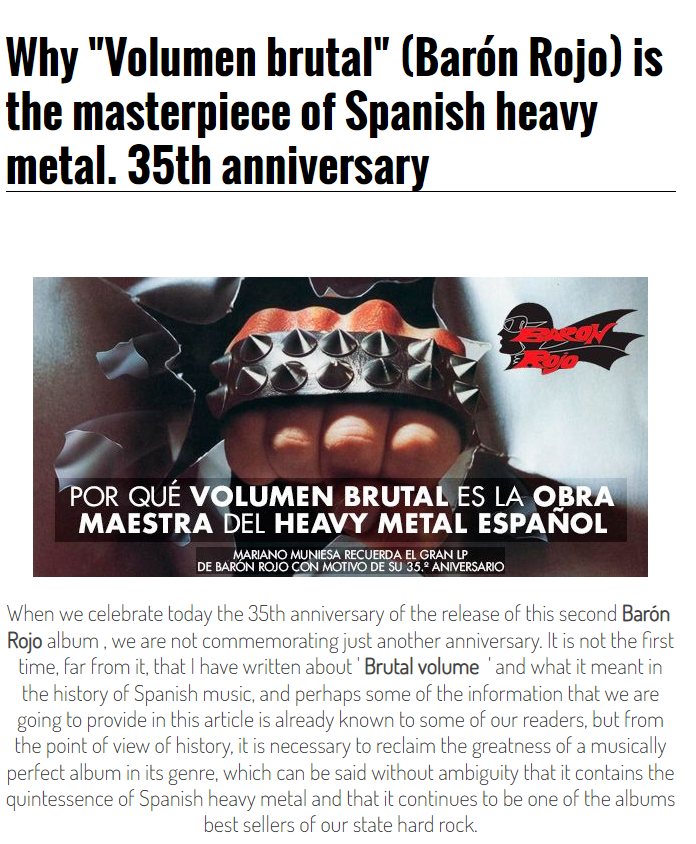 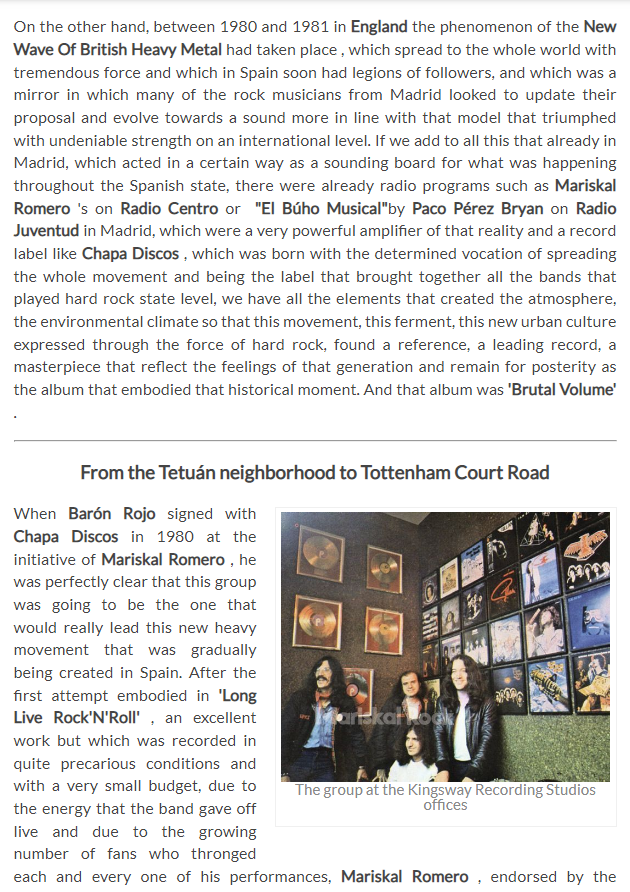 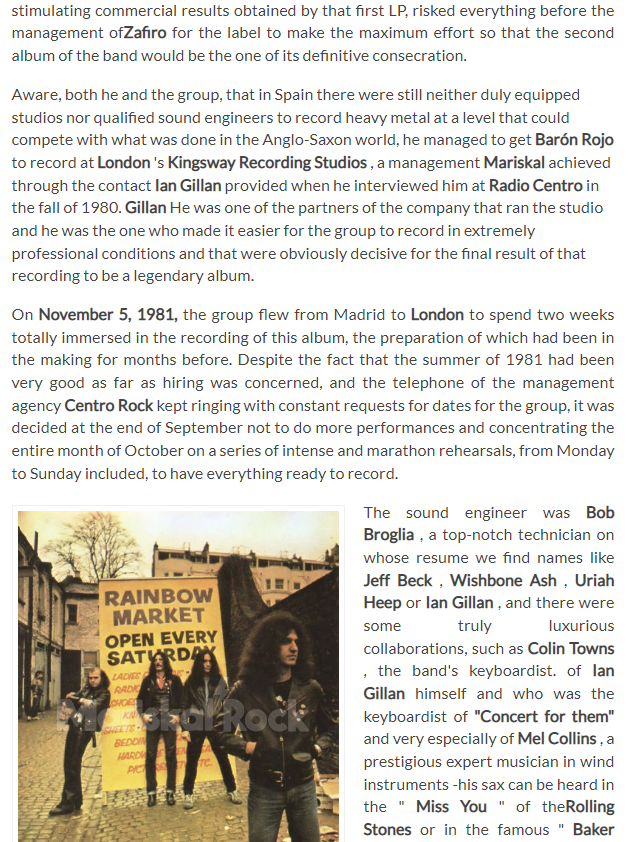 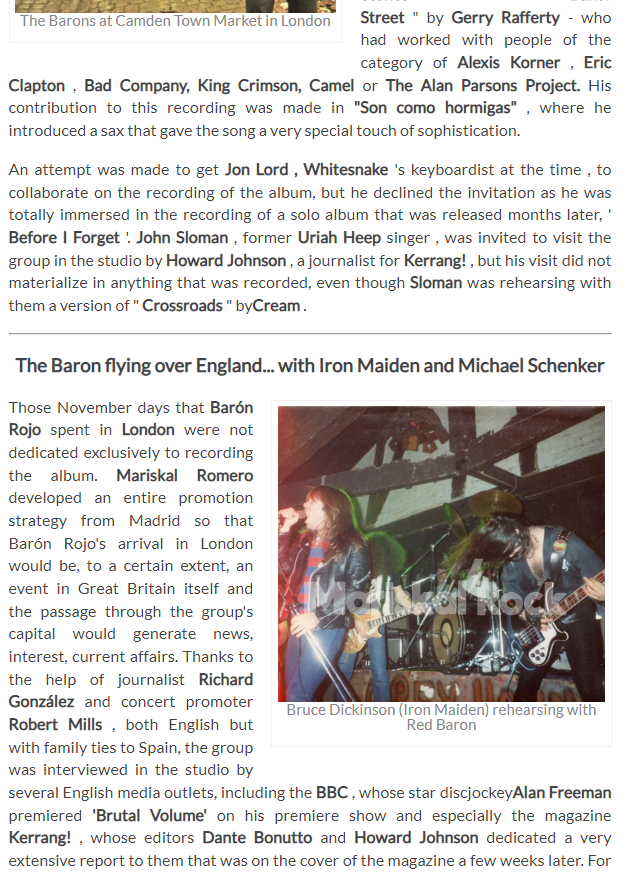 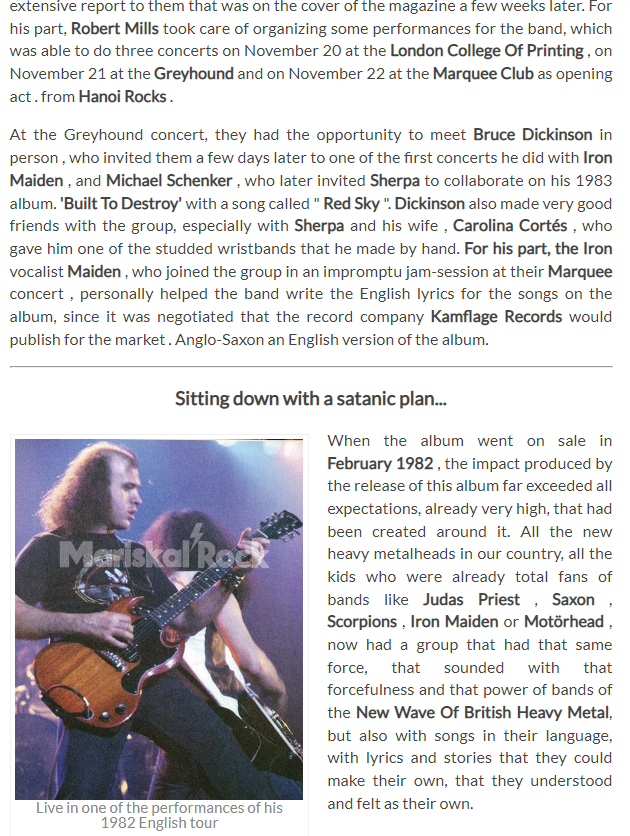 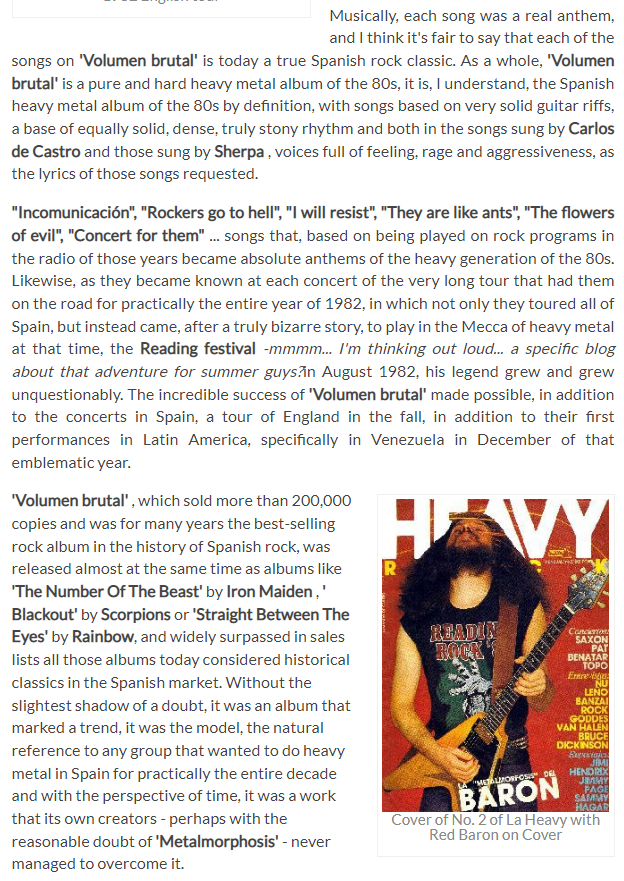 [THE TOUR WITH HAWKWIND]

There is no evidence that between August and October of that year there was any other tour, if anything there were occasional concerts, but it can be assumed that those weeks served to prepare new material. In fact, it can almost be said that there was no other time to write the songs for ?Metalmorfosis?. Be that as it may, in October they flew over England again, on a series of solo dates, as well as another 25 opening for the group HAWKWIND.

That group was presenting their album ?Church of Hawkwind? and BARON ROJO managed to open the twenty-seven dates that took them to a large part of the islands, which helped to harden their live show in hostile environments on many occasions.

The cliché of the English fan who sees opening acts as mere targets to sharpen the aim came true in many cases, as a HAWKWIND roadie recalls: ?back then opening for HAWKWIND was a hopeless task, to say the least. The audience was so fanatical about the group that the opening act had to put up with all kinds of abuse. In that sense? the mighty Baron? he was no different than the others, and in addition the problem of the Malvinas Islands was still fresh and many English people identified Spain with Argentina, so can you get an idea?

They however hold their own by presenting a different repertoire than the one they had used in Reading. On this tour the performances opened with ?Come On? (?Red Baron?) and the presence of the two albums was more compensated, because, at that point, both albums could be found in the British import market and, of course, they had to be promoted. They used to close with a version of ?Crossroads? who knows if to leave a taste in the public’s mouth, sweeter than what they would have achieved with ?Stan up? (? I will resist?). The tour was full of anecdotes, some good and others not so much. Of the last ones, Sherpa recounted in his book how Hermes, he and Nick, his English roadie had to flee from a pub in Newcastle, with their lives threatened, but anyway, that was a small blip in the midst of achievements such as getting ?Stand up? (the English version of ?Resistiré?) hit number one on the Melody Maker heavy metal charts one week, that Kerrang! (English, naturally) gave them the cover, with a photograph of Armando de Castro in action, or that at the closing of the tour at Hammersmith that took place on November 15, they appeared in large letters as ?guest stars?, when usual was that the opening group was not even mentioned.

A few days later, on the 18th and 19th, they did two shows at the Marquee, this time accompanied by the late Paul Samson on guitars and by John Sloman (yes, this time!) as a singer.

It was the farewell to the British Isles, although they would find a piece of them again just a couple of weeks later. Although we must not forget that in this interval there was a visit by BARON ROJO to America, specifically to Venezuela, to make a single concert that coincides with the release of ?Brutal Volume? in Europe and Japan, by the hand of Mausoleum.