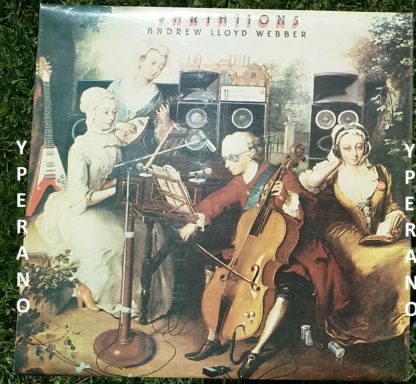 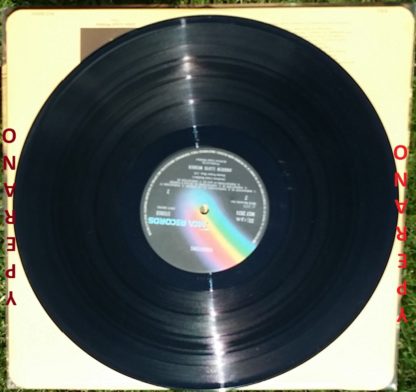 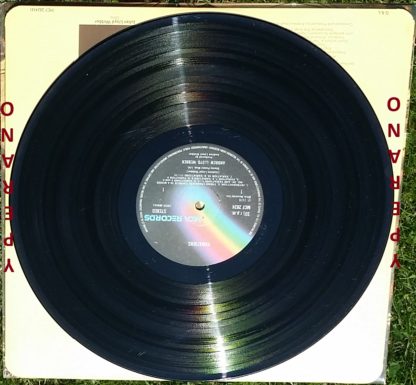 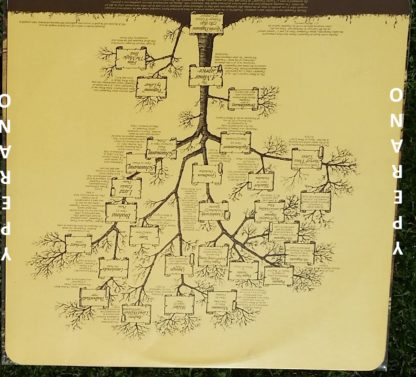 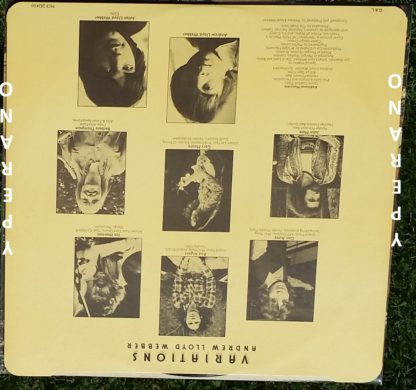 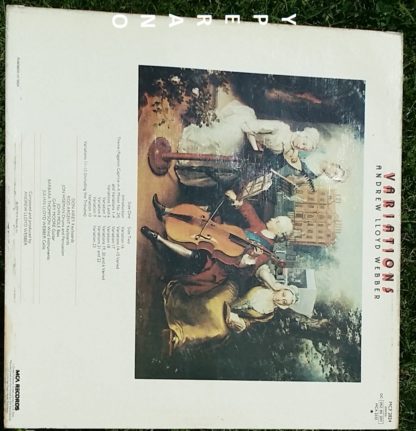 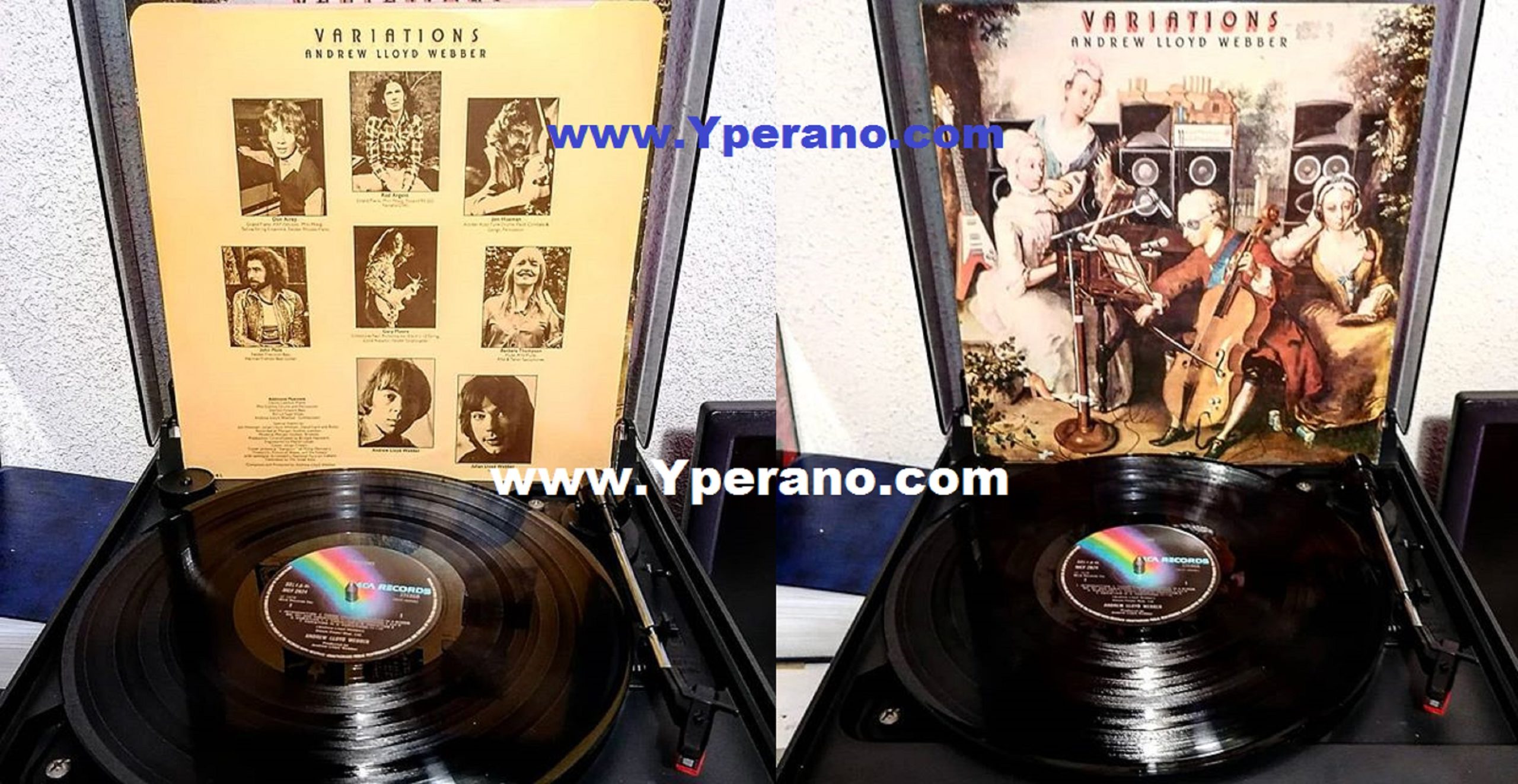 The sleeve is in excellent condition with no edgewear, marks or creases.

The original inner sleeve with pictures and credits is in excellent condition.

The vinyl is excellent condition with a no marks and a nice shine. It plays really well. 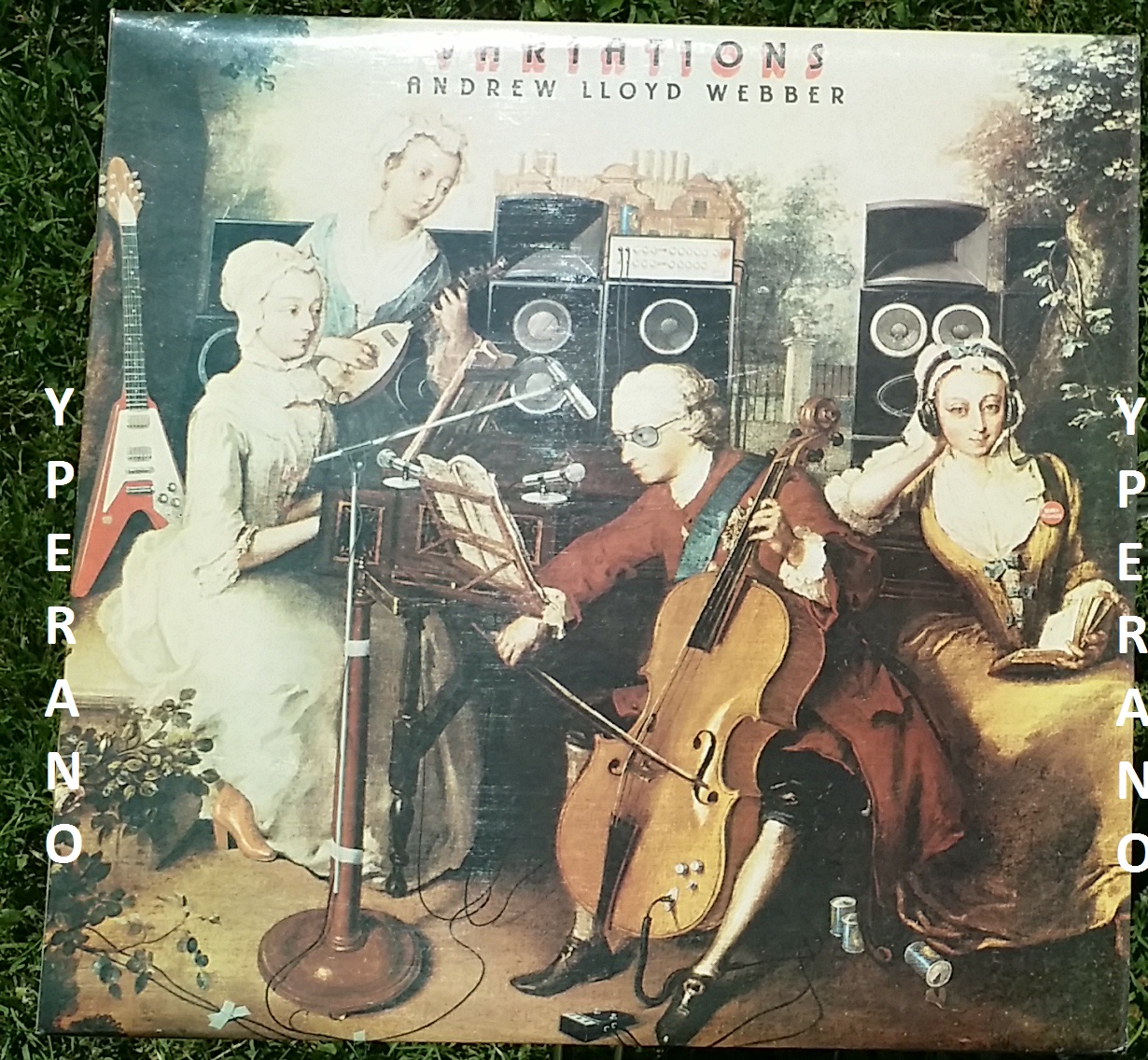 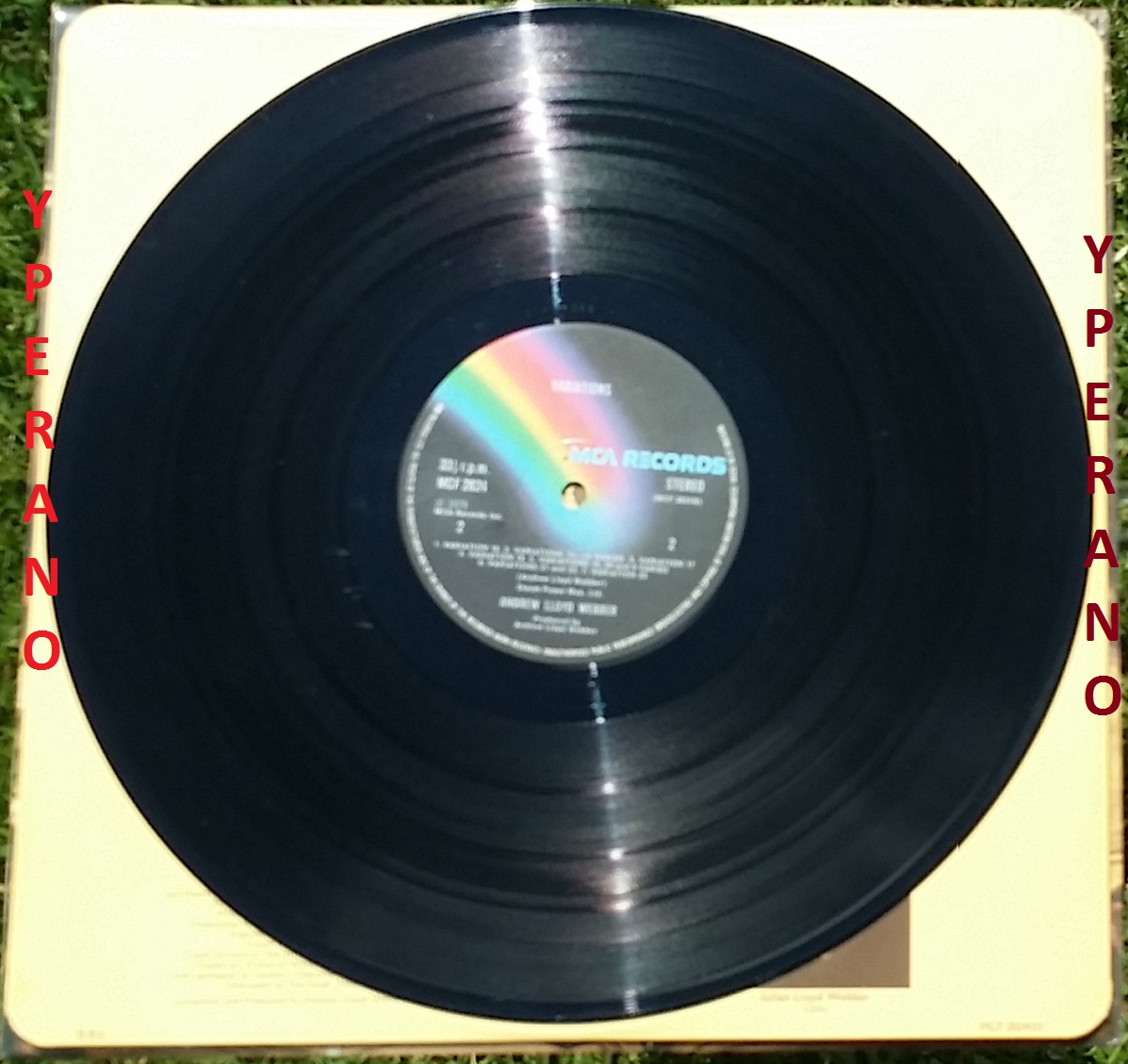 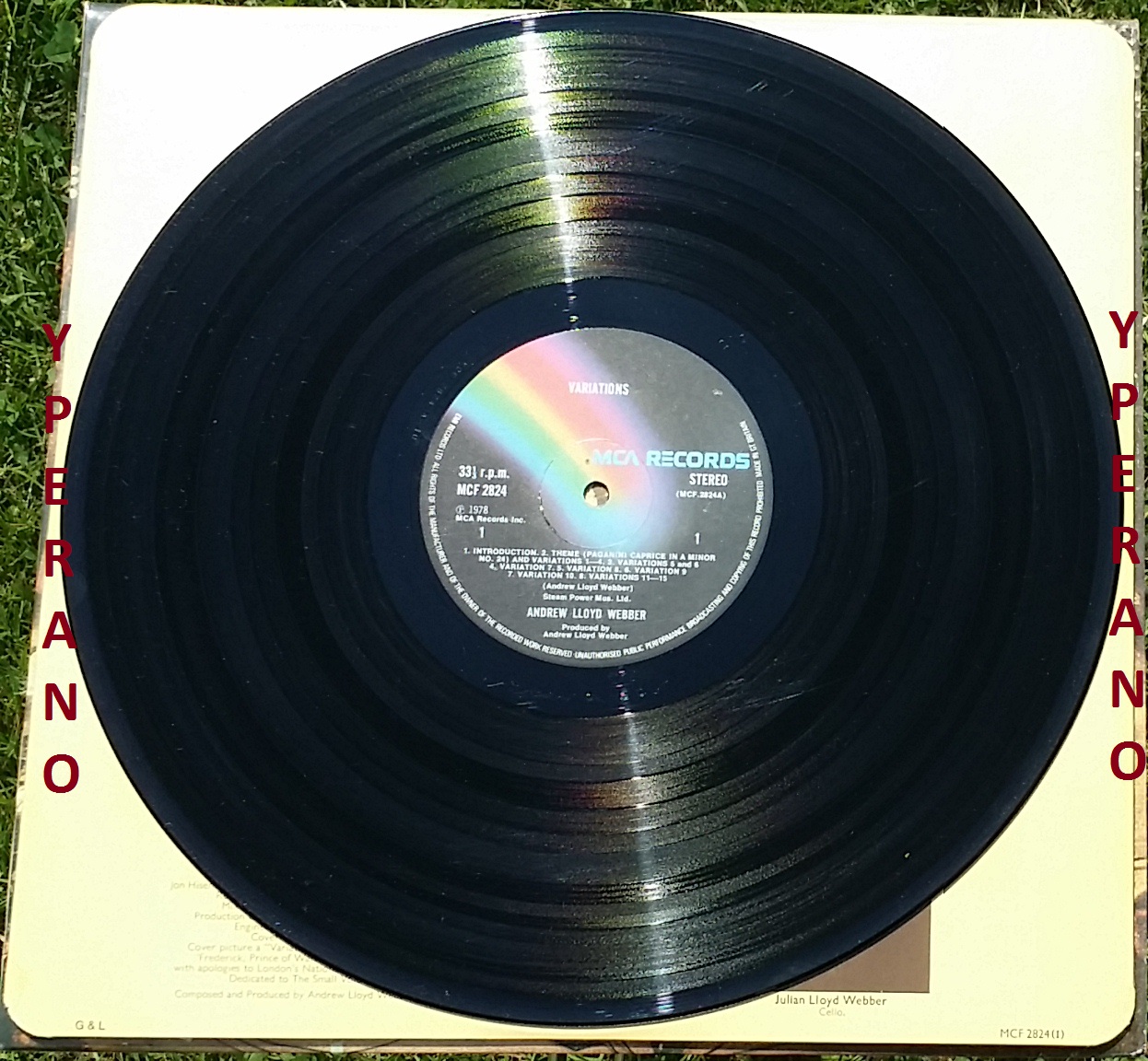 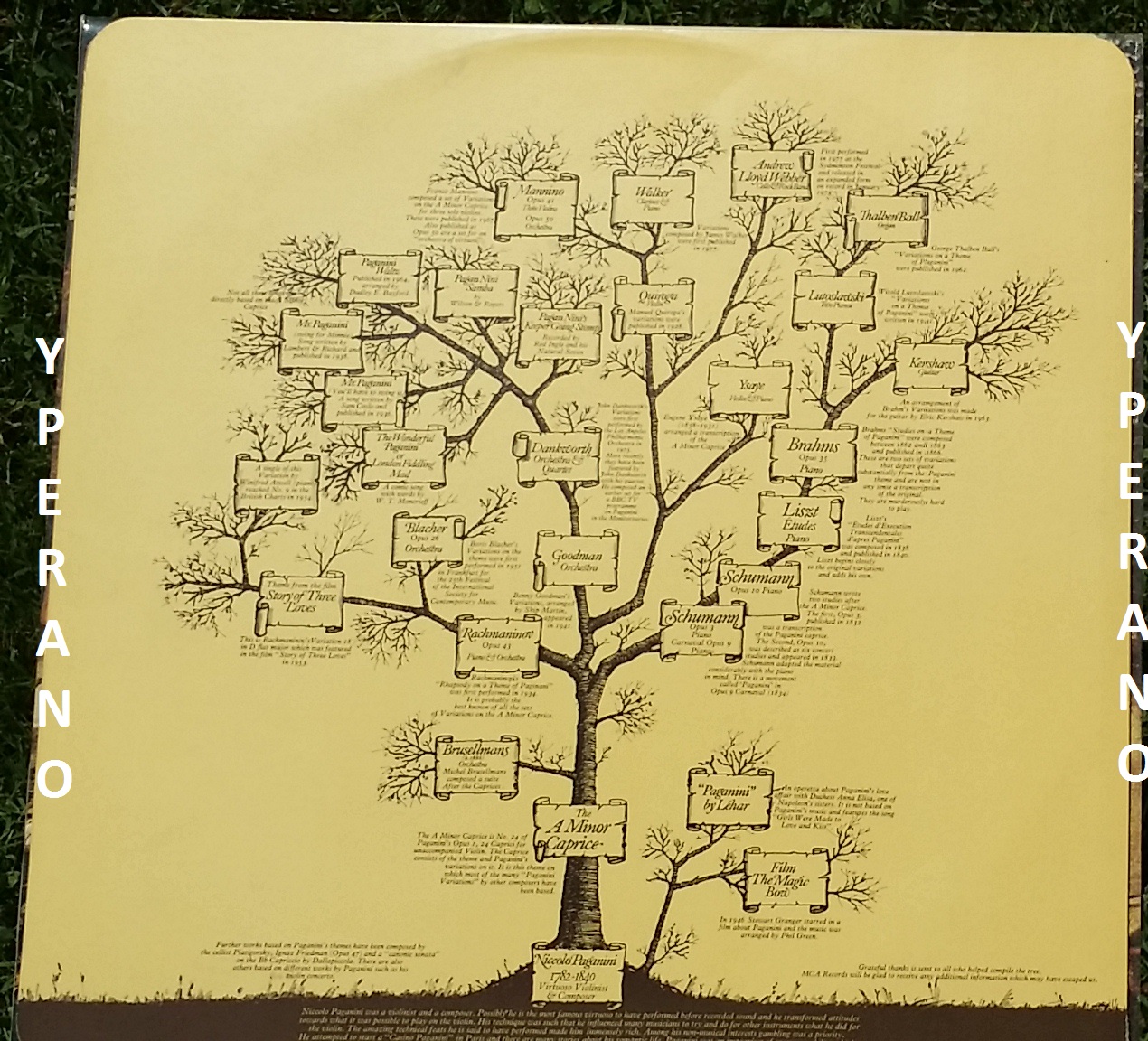 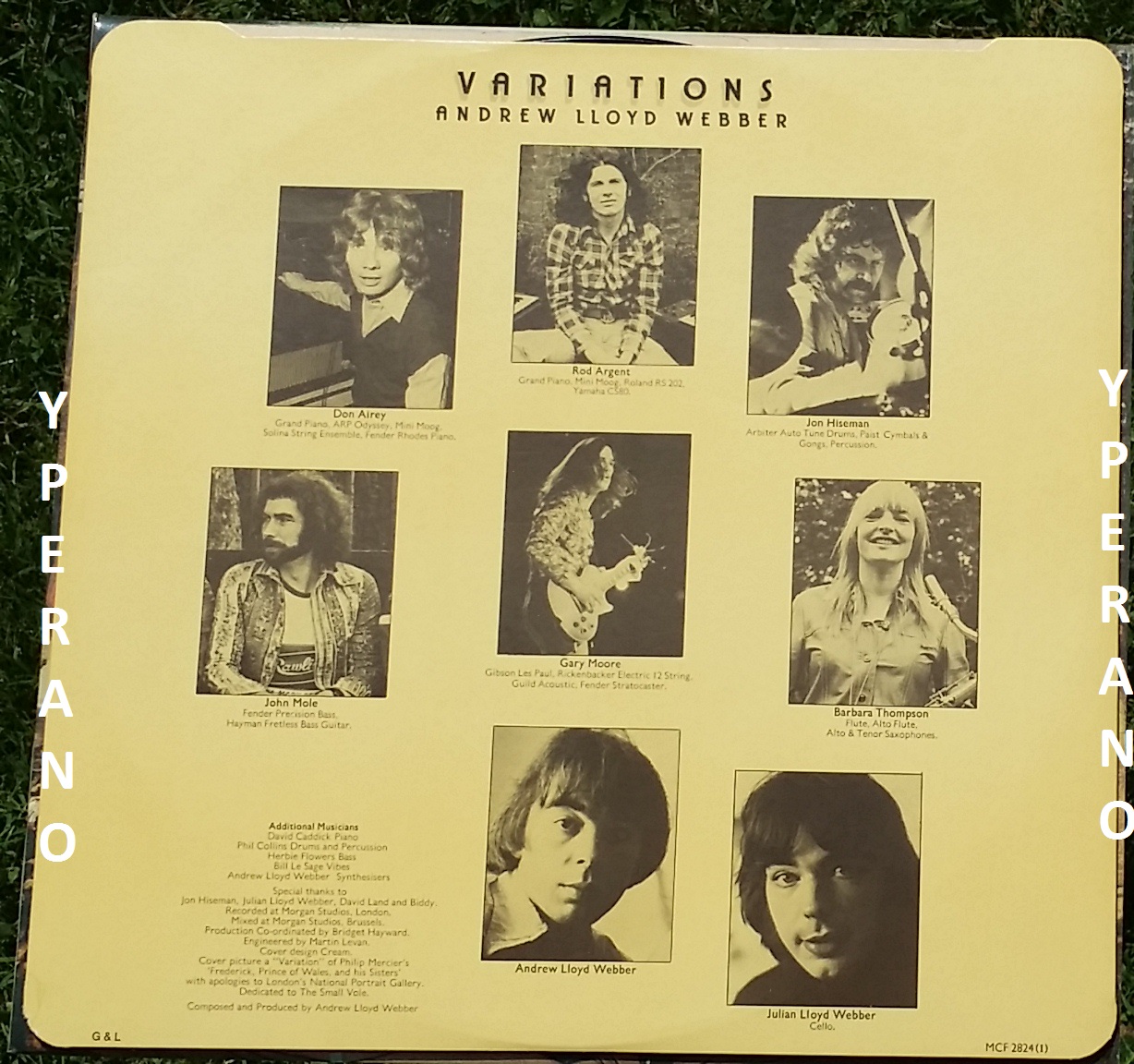 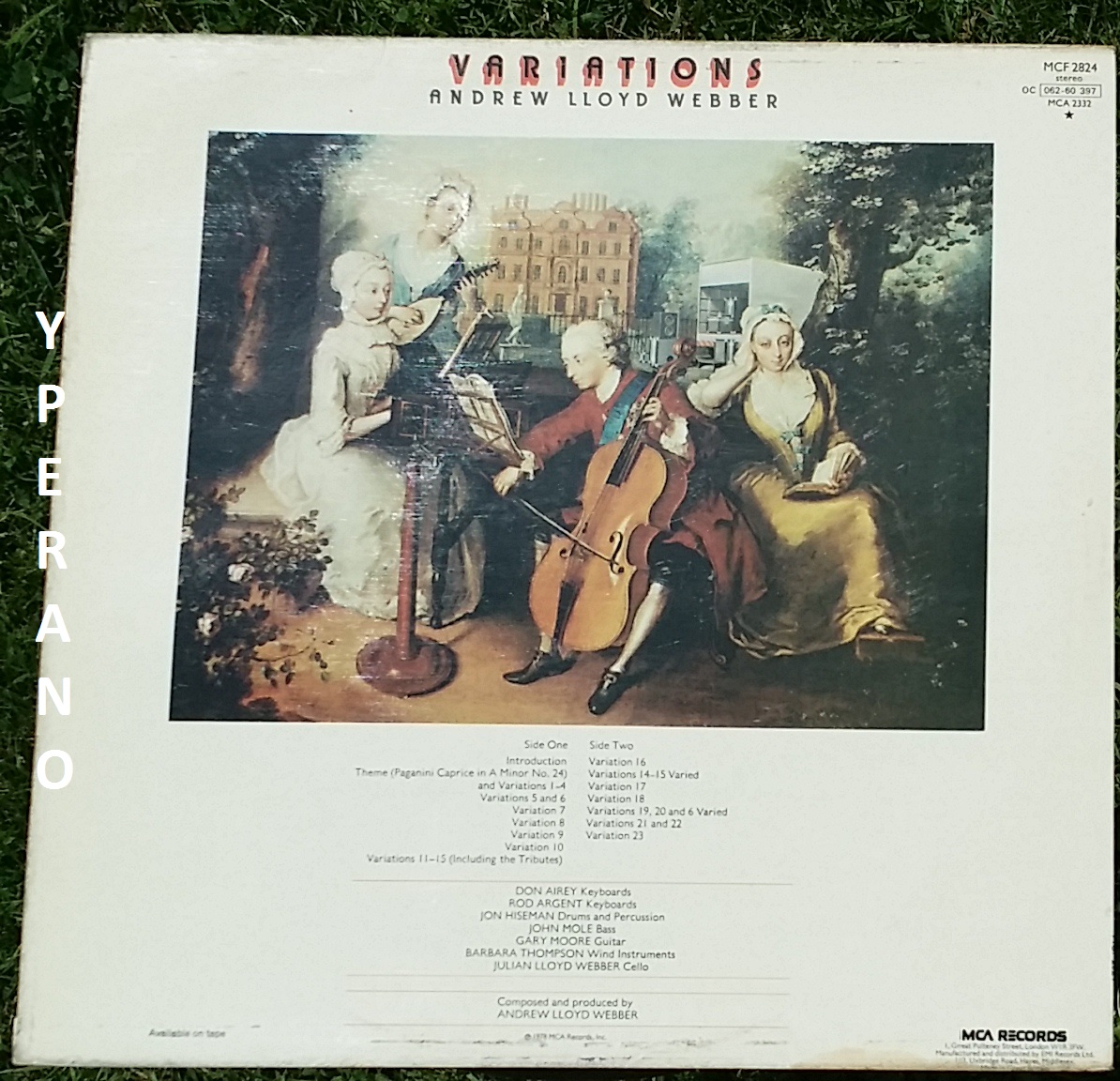 Variations is a Classical/Rock fusion album by Andrew Lloyd Webber
Andrew Lloyd Webber and younger brother Julian Lloyd Webber were always very close, but their two different careers (a rock musical composer and a classical cellist) meant that a collaboration seemed unlikely. It wasn’t until Julian beat his brother in a bet on a Leyton Orient football match that Andrew was forced to write his cello work.
As his subject, Andrew chose the theme of Paganinis 24th caprice and added 23 variations for cello and rock band. The work premiered at the 1977 Sydmonton Festival with rock band Colosseum II, featuring Gary Moore, Jon Hiseman and Don Airey being joined by Barbara Thompson (Sax, Flute), Rod Argent, (Piano, Synthesizer, Keyboards) and Julian Lloyd Webber (Cello). It was subsequently rearranged and recorded in 1978. It reached number 2 in the album charts.
The cover is based on the painting Frederick, Prince of Wales, and his sisters by Philip Mercier.

The work was used in Song and Dance and David Cullen made an arrangement of the work for cello and orchestra. The opening and closing variations have been rewritten for cello and piano, the latter of which Julian often uses as an encore, due to its amusing glissando down to Bottom A (forcing a mid piece retune) to conclude.
The opening theme is used as the theme to The South Bank Show and Variation 5 became Unexpected Song with lyrics by Don Black. Variation 18 is an instrumental version of the title song from the first Rice/Webber musical The Likes of Us.
———————————————————

This is a genuine oddity in the career output of Andrew Lloyd Webber, growing out of a personal/familial vignette. The piece, a set of variations on Niccolo Paganini‘s “Caprice No. 24” (which had previously inspired adaptations by Franz Liszt, Johannes Brahms, Sergei Rachmaninov, and Boris Blacher, among others), came about because Andrew Lloyd Webber lost a bet with his cellist brother Julian Lloyd Webber, and was obliged to compose a work for cello and rock band for him, which was premiered in August of 1977 at a music festival, and subsequently recorded and released on an LP (later transferred to CD) by MCA. At the time, progressive rock was still hanging on to some semblance of commercial viability, and in fairness, MCA had made a fortune off of Lloyd Webber‘s work on Jesus Christ Superstar, etc. The work was later incorporated into Andrew Lloyd Webber‘s Song and Dance, and mid-’80s theater work, and later appeared in a recording on Philips, featuring a new orchestration and the participation of Julian Lloyd Webber with the London Philharmonic under Lorin Maazel. This recording, featuring what amounts to virtually an all-star contingent of players — including Rod Argent, Herbie Flowers (whose playing is outstanding throughout), Jon Hiseman, and Gary Moore — is reminiscent of other rock-classical hybrids of the period, a slightly awkward fit highlighted by charming and delightful moments, along with some bracing moments for the band. As the scoring is rather lean (cello by the Lloyd Webber sibling and a band, complete with synthesizer and other electronic keyboards), it’s a bit less bombastic than most prog rock of the period and there’s also more of a sense of humor in evidence, especially in the quotations hidden within the scoring. The rock players get their moments, especially on “Variation 7” (which is Moore‘s great showcase), and while it’s a little more involved than the typical Yes or Emerson, Lake & Palmer recording of the era, there was something there for the high school or college kid just looking for music to get stoned to. Ultimately, as music, it’s a minor part of the Andrew Lloyd Webber catalog (though it did, as pointed out, work its way into more substantial pieces and settings), but it’s a lot of fun and charmingly unpretentious. 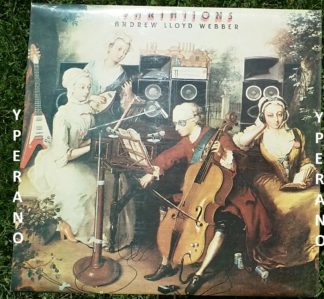