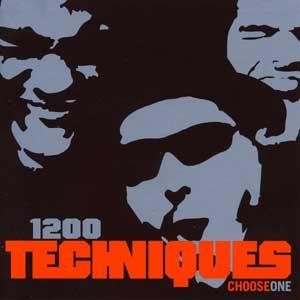 They are is a genre of music unto itself. Blending eclectric tastes ranging from: hip hop, rock, soul, funk, electro jazz and breakbeat, which combine to move the crowd.

But how else can you describe music which sounds like hip-hop, break beats and alternative rock with some old-fashioned funk thrown in? Does it have some unwieldy name like indy-electronica-funk-dance-hip-hop fusion?

It’s reassuring when, asked to choose one, the 23-year-old Nfamas doesn’t fire straight back with a triumphant “we choose none”.

“Alternative hip-hop” is what he calls their music. “We’re 70 per cent hip-hop and 30 per cent something else,” he says. “The 30 per cent is rock-funk, or break beats or straight funk.” Glad to have that sorted.

Following in the wake of the Melbourne band the Avalanches, one of the best known Australian dance outfits in Britain, 1200 Techniques are part of the biggest international musical movement of the past decade – hip-hop. The band have recently released their first album, Choose One, and are touring Australia.

Brotherhood was the foundation when 1200 Techniques formed in 1997. And that’s the bona-fide sibling type of brotherhood – the band originally included two pairs of brothers. But because Nfamas’s elder brother Kabba left for Britain in 1998, Nfamas now works with DJ Peril on turntables, percussion and production, and Peril’s brother Kemstar on guitar.

Nfamas – who you might also know as Victorian hurdler Nfa Forster-Jones and the genie in the Tim Tam ads – launched his musical career at the age of 10 with his brother’s help. The first song he ever performed, called Frustration, was written by the 16-year-old Kabba. Nfamas remembers jigging school and going to his mate’s house to record the track.

“Frustration was about a girl I had a crush on. I do my homework with her, but she doesn’t really like me,” he says.

“Then I pretend to drown in my swimming class because I think she was going to give me mouth-to-mouth resuscitation, but when I get pulled out of the pool it’s the teacher who gives me mouth-to-mouth and it’s really gross.”

The lyrics have changed a little over the past 13 years. Penned by Nfamas, the words to the first single off the album deal with the weightier topic of cosmic retributive justice. The film clip for Karma was directed by Michael Gracey, who has worked with Baz Luhrmann and has introduced Australian hip-hop to a wider audience.

But Nfamas says that Australian hip-hop hasn’t penetrated the mainstream, or caught up to the international scene.

“Hip-hop is basically New York and LA, though I think Australia is coming up. Something big’s about to happen here.”

But he’s passionate about making tracks that can be played anywhere in the world, without necessarily sounding Australian.

“We should sound international,” he says. “Why should we want to keep all our music here? The marketplace is too small, no-one cares. We might as well make it as big as we can. I’m not saying we should start rapping with American accents, I’m just saying, why not make the production as good as the rest of them?”

Of course, there are comparisons between 1200 Techniques and the Avalanches, but Nfamas says the bands aren’t that similar.

“They’re cool and I’m glad they’ve done well but I think they got a lot of their credit due to [their DJ] Dexter,” Nfamas says. “Having an international DJ in your band is going to help.”

Apart from anything else, the Avalanches don’t have the volatility that comes from working with siblings like Peril and Kemstar.

“They’ve argued at a number of radio interviews – one of them might walk out, like they did live on Triple J,” he says.

When problems arise, Nfamas is the one who plays mediator.

“Onstage I’m psycho but offstage I’m probably the most mellow of the group,” he says. “I’m a pretty chilled-out dude. I’m the guy with the dreads.”