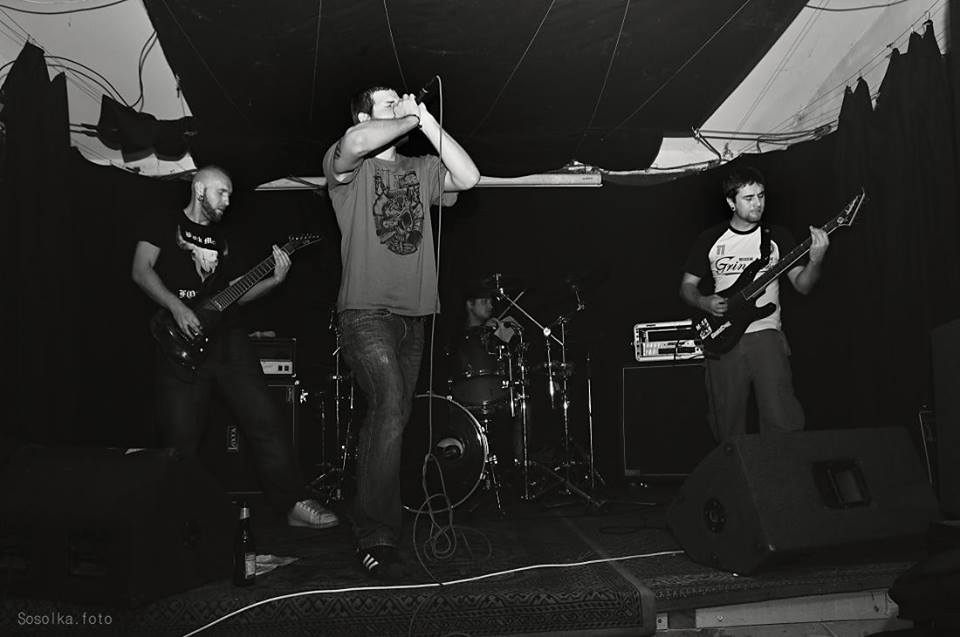 What Czech grind is missing: fear, anger, violence. Malevolence. Sadism. Czech grind all too often sounds like extremity by way of Mr. Bungle- all novelty, no meat. So much of it lacks riffs, real songwriting, and a core of pulverizing heaviness. Bands like !T.O.O.H.!, Plastic Graves, and Pigsty (in fits and starts) are all afflicted by this. More than anything, though, it’s the party feel; the rollicking “good times” death/grind that lacks any and all of the hate and savagery I listen to the style for. It makes a caricature of death and grind’s scary elements, turning it into a sort of “Where the Wild Things Are” version of what a monster looks like. The fangs are just for show- they’re really just like you and me!

This isn’t, on its own, too far structurally from the rest of the Czech grind scene. It has a base of crust-flavored death/grind, chopped and screwed with multiple, contrasting vocal styles and a violently pummeling sense of rhythm. What makes it different are the bands it’s similar to. The closest immediate comparison is to F.A.M. (a Polish band, of all things,) alongside lesser-known entries of the Bizarre Leprous roster like Exhale. Altogether this is substantially more crusty and grinding than the typical Czech band, omitting much of the most overt death metal riffing that characterizes the style in favor of a cruel, dissonant attack of excessive distortion and furious, careening song structures. While it’s recognizably Czech in origin, “Sealing Off the Vagina by Sewer Lid” doesn’t feature any goofy Popeye vocals, sudden diversions into dubstep, or wacky circus music segments; the idiosyncrasies are mainly vocal in nature alongside the recognizably Czech style of riff and rhythm. At first glance, not much makes it different from the average; in fact, it might be even more nondescript than Czech grind usually is.

But it’s the meat of the music that’s substantially changed. The songs are compressed, violent numbers that take as much from Bloodbastard as Alienation Mental; rarely longer than two minutes, the songs on this album are brief, straightforward numbers dominated by crusty, off-kilter strips of punk-influenced death metal in the Polish vein bound together with some of the most savage blasting I’ve ever heard. Rarely do blast beats convey the sense of weight and battering aggression that they do here; as a result of their relatively rare usage compared to most modern death/grind, they’re given more gravitas and a sense of fury that gets transmutated but not reduced by their abrupt shift into thrash, d-beat, or gore-polka territory. The riffs are more recognizable and memorable than is typical for the Czech scene, but this memorability is tempered by the gut-wrenchingly low tuning and completely insane distortion the strings are soaked in. The guitars sound more like distorted bass than a six-stringed instrument much of the time, given a devastating depth and growling, subterranean quality that makes them that much more malevolent and dangerous.

And that, itself, is what really defines this record: it’s incredibly brutal and even the goofiest moments never manage to strip the animalistic, unbelievably barbaric nature of the music from its structural presence. While Destructive Explosion of Anal Garland uses much of the same lexicon of the rest of the Czech grind scene, with bouncy, punk-influenced rhythms and riffs that hop around on the fretboard in a surprisingly jovial manner, the effect created by these moments never has the quirky, juvenile atmosphere of many of their countrymates. The gore-polka sections just seem like a brooding preparation for another skin-peeling blast beat (and they typically are) and even the “happiest” riffs have a genuinely sinister, unsettling quality about them. Much of this can be owed to a rather substantial influence from legitimate goregrind- Catasexual Urge Motivation sounds like a distinct possibility in the guitar tone and riffing style- as well as from what sounds like American slam death. Occasionally a passage will pop up that reminds one remarkably of a sped-up section of “Butcher the Weak”; while they don’t function as slams per se, these amped-up breakdown parts manage to be some of the most gripping and neck-snapping on the album. The nasty, slurring, Terminally Your Aborted Ghost-style vocals which make up much of the “singing” on this record are just the hymen on top of the gore sundae presented; the contrasting vocal styles never get in the way of the music and even at their silliest seem predatory and sickening, just as they should be.

While the rest of the Czech Republic seems content to waffle around making poop jokes and seeing how wackily they can burp into a mike, Destructive Explosion of Anal Garland are out for blood, exterminating !T.O.O.H.! fans with a flick of their collective wrist and turning “fun” to ash before the horrified gazes of schoolchildren across the world. This is not the most distinct band in the Czech grind scene, or even necessarily the best (a title which may go to Four Seats For Invalides,) but what they might lack in an obviously unique sonic presence they massively make up for in pure songwriting and guttural, churning misanthropy. If you like Czech grind, this is probably not for you; however, if your idea of a good weekend is a three-day drinking binge with “Satyriasis and Nymphomania” on loop, welcome aboard.