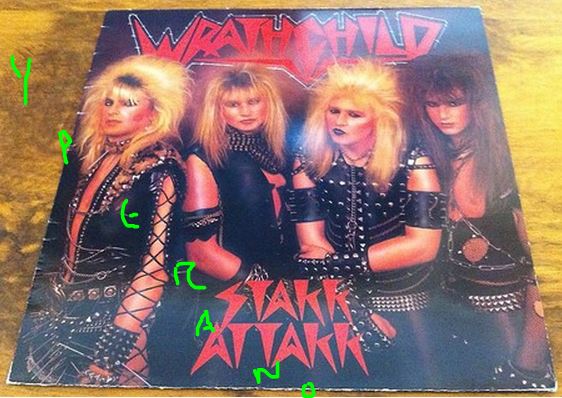 Free for orders of £50+ because the first song of each side can’t play as a large chunk of the vinyl is broken. 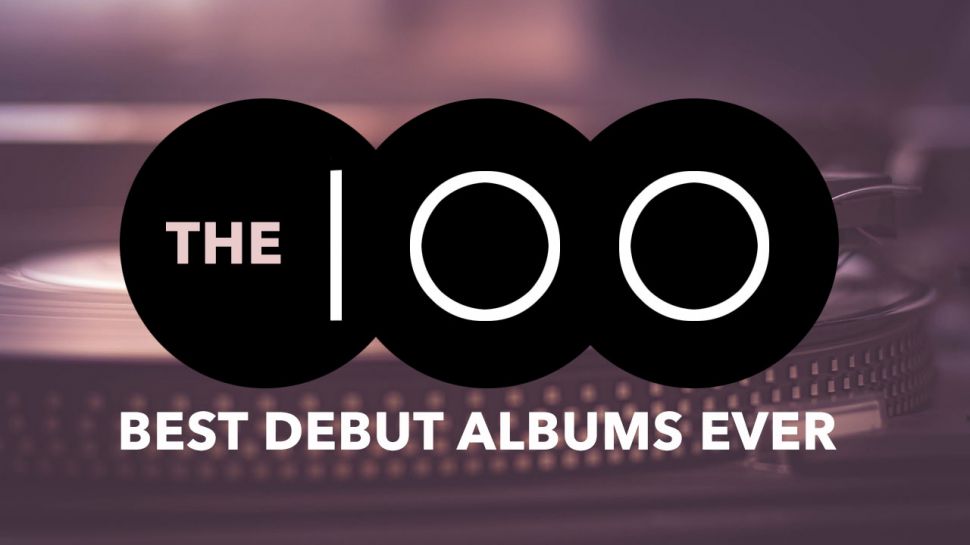 A teetering platform heel of an album, Stakk Attakk is a low-rent sleaze-fest full of tacky posturing and barking-mad bubbleglam anthems. Misspelling the titles (Law Abuzer, Alrite With The Boyz) only added to the songs’ absurdly infectious charms.

“The surprise of the season – if not the century!”, wrote Classic Rock‘s Geoff Barton in a glowing review. Not only have “Worcestershire Glam wallies” Wrathchild come up with an excellent album; they’ve also made one of the records of ’84.

“In the simplest terms, Stakk Attakk is a pure pop-metal delight. Producer Robin George has tarted up the band (if such a thing were possible!) by concocting a chintzy Chinnichap sound and adding wacky studio FX, inventive backing vocal arrangements, guitar synthesises and the like. The band seem to have been inspired and motivated by George’s studio expertise; they grit their teeth and go for it on every one of the ten trax, singing and playing with astounding enthusiasm and maturity.” 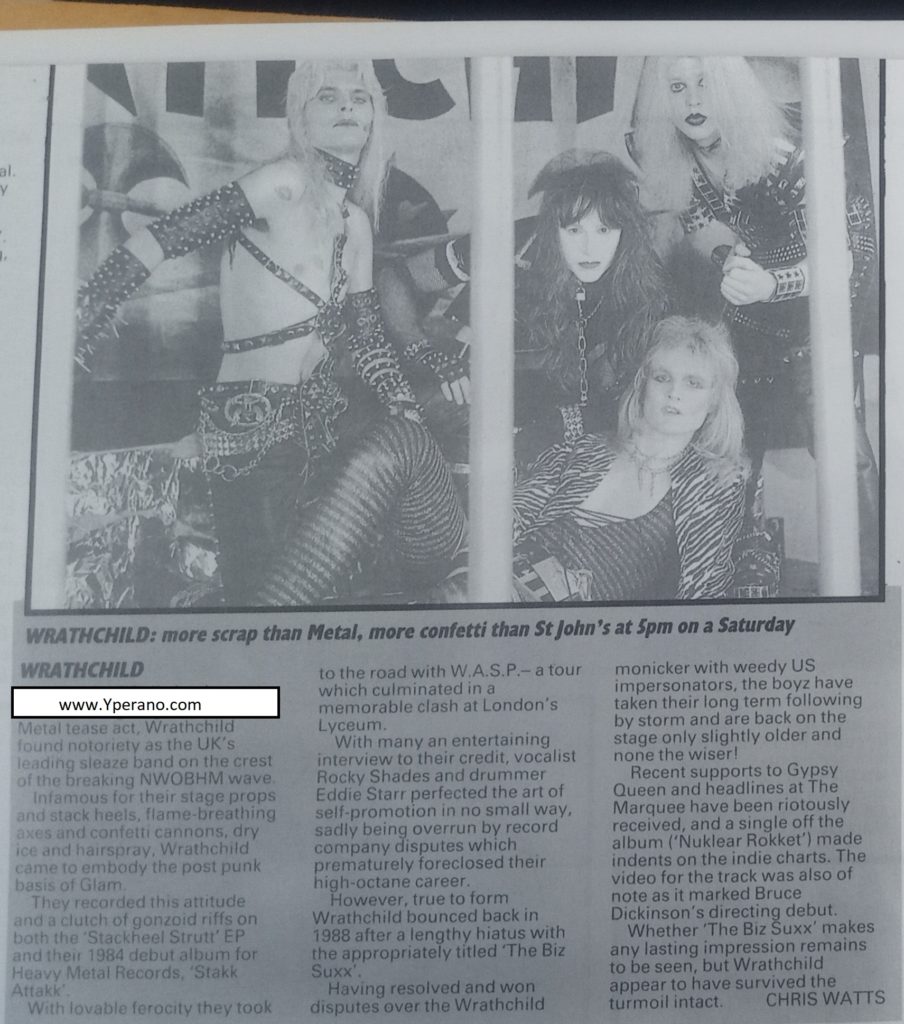 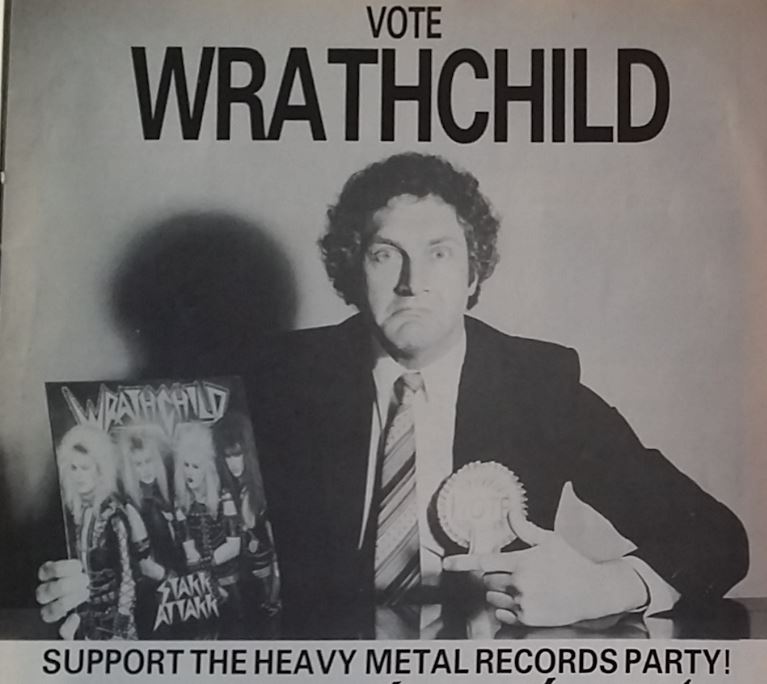 B1 Alrite With The Boyz
Written-By Glitter*, Leander*
B2 Sweet Surrender
B3 Law Abuzer
B4 Tonite
B5 Wreckless

Producer Robin George
Written-By Wrathchild (tracks: A1 to A5, B2 to B5)

Wrathchild (sometimes known as Wrathchild UK in the United States due to a naming conflict with Wrathchild America) were an English heavy metal band. Formed in 1980, the group was an early band of the glam metal genre, starting off about the same time as bands of the genre such as Mötley Crüe. They are indeed the “Godfathers” of the glam/sleaze metal movement back in the early 80s.
In their home country, the bands speciality was in its D.I.Y. aesthetic (common for many NWOBHM bands), over the top stage shows, and striking image. During their early days, they would often play in pubs but still used confetti, pyrotechnics, and dressed in full glam metal gear, including their trademark platform boots and huge, teased hair.
Wrathchild was formed in 1980 in Evesham, England by Marc Angel and Phil “Wrathchild” Vokins. They recruited Rocky Shades for lead vocals, and Brian “Thunderburst” Parry on drums. Phil Vokins left in 1981 to join Bill Ward (Black Sabbath)in America with a new band Max Havoc and Brian Parry left and returned to his hometown of Chester.
The band soon added two members from the band Medusa; guitarist Lance Rocket and drummer Eddie Star who became mainstays in the band and completed the much recognised over the top lineup for a decade of touring and recording.
After releasing a string of demos, such as Mascara Massacre in 1982, the band was offered a record deal by Bullet Records. On this label the group put out their first official release in 1983, an EP called Stackheel Strutt.
In 1984, the band recorded and released their debut studio album, Stakk Attakk. It would spawn two singles; a cover version of the Gary Glitter classic “Doing Alright with the Boys” and “Trash Queen”.
Unfortunately, just as Wrathchild was garnering success, they came embroiled in contractual problems with their label, Heavy Metal Records. RCA Records, a major label, unsuccessfully attempted to sign the band from Heavy Metal Records in an effort to free them from their contract. Meanwhile, the group released a video War Machine in 1984.
After finally settling the dispute with Heavy Metal Records nearly four years later, the band released their second album, The Biz Suxx, in 1988. The album spawned a single, Nukklear Rokket, which had a promotional video that was produced by Bruce Dickinson of Iron Maiden. Bruce plays the protester in the video whilst the performance was filmed in the car park at his home in Chiswick. Ron Kennedy directed and edited the video as well as appearing as the mad professor. Steve Prior was the cameraman.
The bands third and final studio album, Delirium, was released shortly after in 1989. It featured Grim Reapers Steve Grimmet on backing vocals. Soon after the release Rocky Shades left to join the punk band Discharge and with the onset of grunge, Wrathchild broke up.

Stakk Attakk is the debut album by Wrathchild, released in June 1984.
Recorded at DJM Studio in London and mastered at Abbey Road, the album was engineered by Murray Harris and produced by former Magnum guitarist Robin George, in addition to him contributing guitar work, drum programming and background vocals.
The lead single from the album was “Alrite With the Boyz”, a cover of Gary Glitters 1975 single “Doing Alright With the Boys”.

“Just look at that cover, they were Glam Titans, trash queens of the highest order. I followed them everywhere I could, saw them destroy WASP at the Powerhouse in Birmingham and loved them till the very end. I saw four dolls, their blades shining bright.” 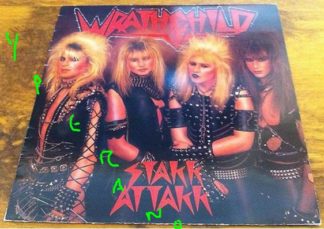