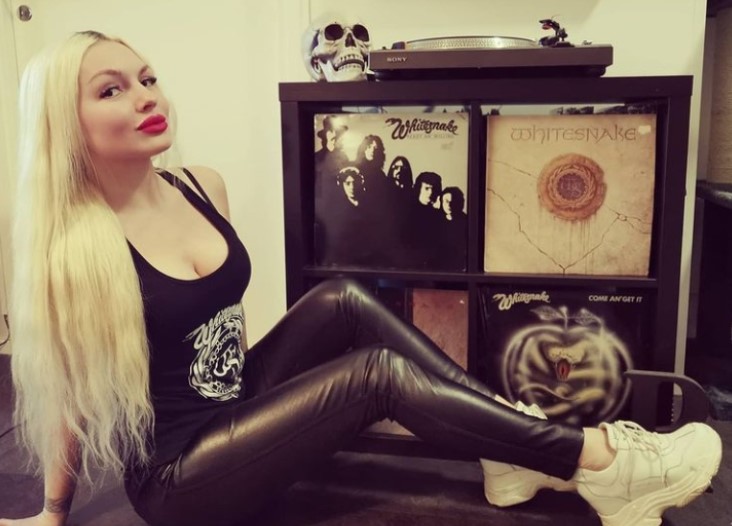 5.0 out of 5 stars Whitesnake on top of their game,
This classic album was recorded seven years before Whitesnake broke through in America, having changed their sound from hard, bluesy rock n’ roll to big-haired pop metal, so the version of “Fool For Your Loving” that kicks off “Ready An’ Willing” is the original gritty rocker, not the slick, keyboard-laden and slightly evil one from the 1989 MTV video.

Back in 1980 original Whitesnake guitarists Bernie Marsden and Mick Moody played big, bluesy guitar riffs and short, sparse solos, Coverdale didn’t yet bleach his hair, and the music was raw and powerful, more Deep Purple than poodle-pop.
“Ready an’ Willing” goes from highlight to highlight:
“Fool For Your Loving”, the hard-rocking “Sweet Talker”, the superbly groovy “Ready An’ Willing”, the dirty, swaggering blues-rock of “Love Man”, and the ballads “Carry Your Load”, the Zeppelin-like “Blindman” and the acoustic “Ain’t Gonna Cry No More”. And one of the bands unknown gems is also here, the funky, piano-driven R&B of “Black And Blue” which can only be found on this album.

Its not great art, sure, but its really great fun, and there is certainly no need to program anything out here. To me “Ready An’ Willing” is Whitesnakes strongest studio album by far, and its also the last one with the original line-up of Moody, Marsden, Murray, and former Purple members Lord and Paice intact. Never again did the Snake make an album of such consistently entertaining songs.

5.0 out of 5 stars Definitive Blues Rock,
The cast of this CD is the true blue whitesnake. I can’t think of a more defining release of the 1000+ rock releases, I have heard that defines the term “Blues Rock”. This is top of the line Rock Blues. Great melodies, perfected instrumentation and Coverdale at peak performance. Don’t delay if you don’t have this recording in your rock collection.

5.0 out of 5 stars The real Whitesnake sound,
This is one of my favorite albums. Nowadays David Coverdale is remembered as the leader of a hair band. But in the past, Whitesnake was a whole different band, with Moody, Marsden and Murray… they played blues rock with a very personal sound. All the people who love listening to honest music and hate pop music should listen to this album… Fool for your loving, Blindman, Ain’t gonna cry no more… all the songs are great.

5.0 out of 5 stars I get this crazy feelin’….. can you feel me baby……..,
SWEET SATISFACTION, READY AND WILLING……. A classic album of a classic rock band, symply great with John Lord, Ian Paice….. This is the cd for you….

5.0 out of 5 stars The BEST early whitesnake.,
this is the BEST of the earlier years. One of Coverdales best. you will definitely enjoy this album if you like great “blues metal”. This album feels real good……
Get down!

5.0 out of 5 stars Hey, they weren’t always Zep clones!,
“Ready An’ Willing” is one hell of a bluesy hard-rock record. From the familiar intro to “Fool For You Loving” (which blows the remake away, Steve Vai or no) to the haunting strains of “Blindman” to the transcendant “Ain’t Gonna Cry No More,” this album is essential blooze-rock.

5.0 out of 5 stars One Of Whitesnakes Best!
Between the period of December ’79 and February ’80, the definite line-up of the group (David Coverdale on vocals, Brenie Marsden/Mocky Moody on guitars, Neil Murray on bass, Jon Lord on keyboards, and Ian Paice on drums) gathered at Ridge Farm, Central Recorders Studio with producer Martin Birch and recorded ten amazing compositions that continue with their trademark R&B/hard rock style with juvenile lyrics. The arrival of Paice on the drum kit gave the group the tight drumming that they needed! The previous drummer Dowle was more of a jazz-fusion player. This is one of their best albums for sure!

The original version of “Fool For Your Loving” (written by Coverdale/Moody/Marsden) launches the album, a song that Coverdale would later re-record in 1989 for the “Slip Of The Tongue” LP but this is the superior version with an excellent solo from Marsden! And so it continues with many highlights of bluesy hard rock. “Sweet Talker” has a catchy, harmonized intro riff, the title track (written by all members except for Marsden) shows the good backing vocals of Moody/Marsden, stomping bass lines from Murray, and Paices tight drumming while the ballads “Carry Your Load” and the remake from Coverdales first solo album “Blindman” showcases the powerful singing from Coverdale. Listen carefully to the first ballad I mentioned…You’ll notice that some of the notes used in its pre-chorus are similar to an older song that Coverdale wrote with bassist Glenn Hughes: “Holy Man” from Deep Purples “Stormbringer” album!
Completing the set is the acoustic zeppelinesque number “Ain’t Gonna Cry No More” with some killer slide guitar from Moody after the drums come in and the pure blues-rock of “Love Man”. Last but not least, in “Black And Blue” Lord delivers some cool classic rock and roll piano and the up-tempo “Shes A Woman” is a high key exit with great moog synth work from Lord playing a descending pattern that sounds like the music from one of those old video games!

If you are into bluesy hard rock, check out this great album, one of their best if not THE BEST!
Thanks for taking the time to read!
Later…

5.0 out of 5 stars They never got better than this!,
Not one of the more popular Whitesnake records, this is nevertheless their finest work.
Everything after this record was a let-down, including the hair-metal 1987 monster. Even today this album does not sound dated… superb music that rocks from the first strains of “Fool for…” to last notes of “Shes a Woman”.

5.0 out of 5 stars Great!,
Great! Classic metal album-good for fans of Deep Purple!

This album marks the addition of drummer Ian Paice to the band, who along with keyboardist Jon Lord and singer David Coverdale, complete 3/5 of the MKIII lineup of the mother band Deep Purple. What an amazing lineup this is with duo Micky Moody and Bernie Marsden on guitars and Neil Murray on bass. A formidable album produced by hard rock & metal ultra producer Martin Birch. The band’s breakthrough album that guaranteed them success outside of England as well.

Legend has it that Ian Pace came to Whitesnake’s show in 1979 drunk and declared that Whitesnake sounds better than Deep Purple has ever sounded. That statement was exactly what Coverdale wanted to hear. He was unhappy with Duck Dowle’s performance on the drums and immediately made sure to replace him with his longtime “purple” friend.

With Whitesnake becoming Deep Purple’s mini-band, initial ecpectation was that the album’s musical direction would be morelike the mother band. But instead of continuing the musical line that characterized Deep Purple and developing it towards heavy metal, as quite a few bands did at the time, Coverdale chose to dive deeper into the musical style of his solo career, producing a classic blues-rock album.

It is interesting to note that in the same year that the album was released the new wave of British heavy metal was soaring high. Bands such as Judas Priest, Iron Maiden, Saxon, Def Leppard and others released albums that were light years away from the style Coverdale chose to lead Whitesnake in.

Despite that, this album is excellent and includes quite a few “pearls” and excellent songs that survived well in the test of time and the most prominent of them:

“Fool For Your Loving” – The song that opens up the album, was originally written for B.B. King, but was eventually stayed in Whitesnake’s hands after Coverdale realized he must not give up on such a song. Coverdale’s theory turned out to be correct after this song became the band’s first hit, on both sides of the ocean. There is no doubt that the “Ready an ‘Willing” version of the song is dozens of times superior to the “Hair Metal” version of the song, as released on the 1989 album “Slip Of The Tongue”.

The theme song “Ready an ‘Willing” which is also the second single released from the album, features a catchy bluesy riff that allows Coverdale to improvise around it and showcase his vocal abilities.

The track that seals the first side of the vinyl – “Blindman” is also the best song on the album and one of Whitesnake’s greatest of all time. A melting and melancholy blues-rock ballad that demonstrates the incredible abilities and voice of Covertdale, who undoubtedly sounds better here than any other song in his rich repertoire. The song was first released in 1977 as part of Coverdale’s first solo album called “White Snake”, and again, without a doubt the “Ready an ‘Willing” version is much better.

The opening track on the flip side of the vinyl, “Ain’t Gonna Cry No More” is a dynamic song that opens soft and quiet with Moody’s 12-string guitar, sounds on the verge of country music and later includes an amazing slide-guitar solo.

Other songs worth mentioning: “Sweet Talker”, a bouncy and cool Cow Bell song that includes a virtuoso organ solo by John Lord, the track “Carry Your Load” that sounds for times like Bad Company, the traditional and mesmerizing blues of “Love Man” and the dynamic “She’s A Woman” which probably includes The best solo by John Lord on the album.

Although the sales figures for this album may say otherwise, “Ready an ‘Willing” brings us Whitesnake at its best.