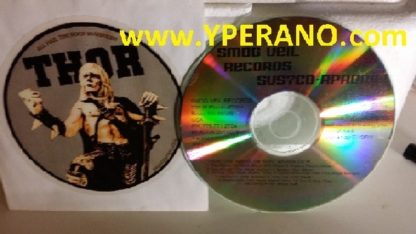 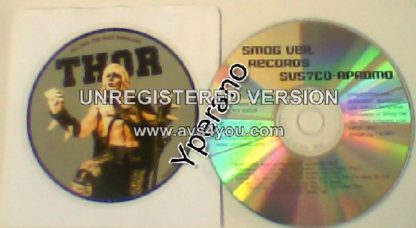 THOR: Thor Against the World. Advance PROMO CD-R. A la Kiss! Free for orders of £88+

A Collection of Fun Metal Songs, and More Goodies – Thor is the rock god, and I have no qualms with his self-given title. This guy clearly grew up listening to everything from Elvis Presley, to David Bowie, to Judas Priest. Much like Lemmy, he fails to see any useful distinctions between the genres of rock and simply melds them all together. Its all just rock and roll anyway.

This album is incredibly fun. It is optimistic, light-hearted, naïve, and most pivotally lawless. I cant count how many genres are in this release. The central style is traditional metal, but he throws in so many saxophone solos, harmonicas, synthesizers, and sha-la-las and hand-clappings that you forget youre listening to metal half the time. Nothing sounds out of place, though. Thors not some pretentious sophisticate who throws in unusual instruments for the sake of being artistic; everything is there because it is genuinely necessary for the song to reach its potential.

Turn to Blue is an acoustic ballad that would have been deemed too light for Bret Michaels to write, while the title-track sounds like late-80s Manowar, even having the phrase Heart of Steel in the lyrics. Oh yeah, and then it mentions burning bridges, which is almost a little too suspicious.

Dont think the versatility stops there. Theres this one awesome song called Megaton Man which is about extra terrestrials descending from outer space to Prometheus-esquely aid mankind. The synthesizer in the verses is ridiculously catchy and dance-worthy. Ive never, ever felt this way listening to metal music before.

The subjective problem with this release is that Thors tastes are too vast to be entirely congenial with my own. Hard to Cry is country rock, and Im just not into country music. I think theres some new wave going on in Long Time, and there are also a lot of alternative rock and grungy tones throughout various points of the CD. Oh well, if you happen to enjoy these styles of music youll probably like this more than I do.

This is honest and genuine: the epitome of true metal. The lyrics are cliché-ridden and sometimes embarrassing, especially hickish tunes about making love to easy women, but you cant possibly hate this. Id recommend ordering this. I know I’ve spent 20 dollars on albums I listen to less-than-half-as-often as this. My recommendation: enjoy.

Thor Against the World
Thor Against the World didn’t sound like traditional metal because it doesn’t sound like anything I’ve considered metal in the past. What it does sound like is one dude rocking out and playing extremely catchy hooks. Even though its not the case, it really does seem like John Mikl Thor sat in a room by himself, and just came up with ten grungy rock songs. Thats what makes this album so great. The first and last tracks are the fist-pumpers and the simplicity of the tracks just make you want to stand in front of your mirror and sing along with them. (Not that I’ve done that or anything.)

Glimmer and Turn to Blue are slower but, dammit, just as good. That is another plus. There are definitely a variety of moods on the album.

I know that Thor has been around awhile and is considered a legend to many. I think that comes across in this album. The fact that it sounds like a demo tape with extremely high production value only adds to the raw power of the tracks. I highly recommend this album to the traditional metal rocker as well as the grungy power rocker. Think Iggy Pop meets…. Conan the Barbarian.

Be the first to review “THOR: Thor Against the World. Advance PROMO CD-R. A la Kiss! Free for orders of £88+” Cancel reply