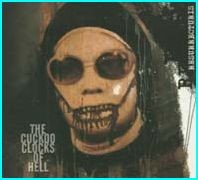 Resurrecturis exist since 1990!!! and this is only their 2nd album. The italian band moves in the path of underground extreme and experimental death metal.They have their own style and influences from Death and the american death metal and thrash scene mostly,with hardcore paths like Hatebreed, Pantera and even Soilwork ( in the refrain with clean vocals and melodies). You will find their songs very interesting and they will also make you sing the rythm…The album has a professional sound and the whole package is very good. Get it!

===============
(ITA) DEATH METAL The second album of this italian death metal prime movers (formed in 1990), the band returns with long awaited follow up to critically acclaimed “”Nocturnal”” (1998). They combine in a exceptional way the powerful of death metal, the speed of thrash metal and the anger of grindcore in a really original form and with a touch of melody. Eight songs of incendiary aggression with a modern sound, an old school flavour and excellent musicianship. Great production and music with a lot of work behind and quality. In their sound you can find influences from bands such as Carcass, Death, Benediction or Testament.