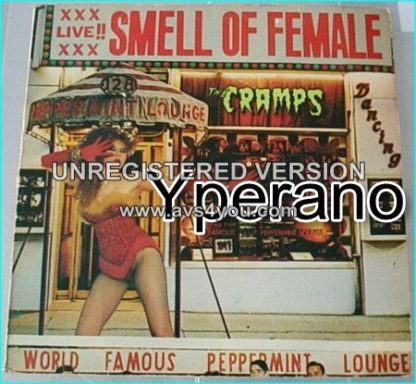 UK vinyl pressing of this 1983 album from the Garage/Punk pioneers. The Smell Of Female is one of the most renowned live albums of all time. Recorded at the legendary Peppermint Lounge, the band were in fine fettle, full flight and fantastic form. The Cramps are usually credited as the inventors of psychobilly, an amalgam of rockabilly, surf rock and punk.

All tracks composed by Lux Interior and Poison Ivy Rorschach except where indicated.

Smell Of Female is the first live album by the American garage punk band The Cramps. It was recorded at The Peppermint Lounge on February 25-26, 1983

———————————————————
5.0 out of 5 stars One of the Best Live Albums I’ve Heard,
The first live album from The Cramps, “”Smell of Female”” was recorded in NYC Peppermint Lounge and proves that the band were just as potent and mesmerizing on stage as they were in the studio.

“”The Most Exhalted Potentate”” belies its pretentious title and with its Middle-Eastern motif, instantly becomes one of The Cramps most intriguing numbers. There a 1960s rock and roll vibe throughout most of this collection that begins with “”You Got Good Taste”” and continues on “”Call of the Wighat”” and “”Faster Pussycat”” (which features a charming xylophone of all things) and is most obvious in a cover of the Count Five “”Psychotic Reaction””. Lux is sounding more like Mick Jagger and less like Gene Vincent on most of this album, which plays like a tribute to 1966 garage bands circa 1983.

The Cramps are broadening their horizons with this effort, yet their trademark tongue-in-cheek lyrics are still there (songs like “”I Ain’t Nuthin’ But a Gorehound””, “”Surfin’ Dead”” and “”Beautiful Gardens””) along with the simple but killer riffs.

The highlight of the album is the alternately simmering/rousing “”She Said”” which offers a lot of call-and-response with the audience which could be annoying but Lux knows exactly what they want and exactly when to give it to them.