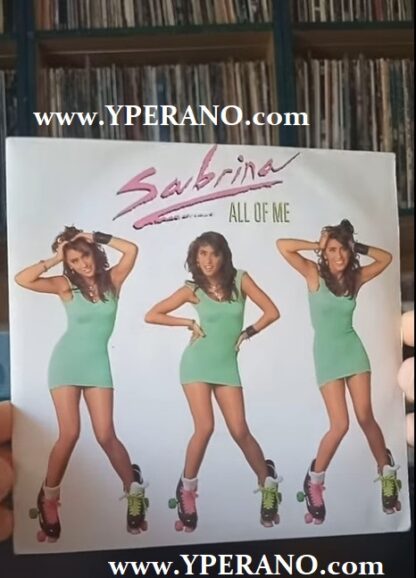 Sabrina: All of Me 7″ near mint vinyl. UK 1988. Check video & Check video of the actual single for sale. Sabrina Salerno

“All Of Me (Boy Oh Boy)” was the fifth international single release by Italian popstar Sabrina. It was released in Italy in July 1988 as the first single from her second album Super Sabrina. It is written and produced by Stock Aitken & Waterman and followed her previous single “Hot Girl” in Europe, while it was her second single release in the UK, following “Boys (Summertime Love)“. Entering the charts in mid-summer 1988,the single became Sabrina’s third major international hit. It followed “Boys (Summertime Love)” and “Hot Girl” into the Top 10 or Top 20 in practically every country in the European continent, and made the Top 30 in the UK. For example, in France it reached number 15, but spent 18 weeks in the Top 50. It made Top 30 in the overall Eurochart, and would probably have peaked even higher had it been released in the UK at the same time as in the rest of Europe. Its estimated worldwide sales are around 400,000-500,000 copies.

Written and produced by Stock Aitken & Waterman, the song is a typical, well-produced quality dance pop record of their golden era. Written especially for Sabrina, the lyrics, production and even the melody are slightly reminiscent of Sabrina’s international breakthrough hit “Boys”: the structure of the introductions are similar (bass line kicking in with the title of the song being sung/spoken), and while the chorus in “Boys” is built around the phrase ‘Boys, boys, boys’, in “All Of Me” it is ‘Boy, oh, boy’. A favorite among Sabrina fans as well as Stock Aitken & Waterman enthusiasts, this song further solidified Sabrina’s status as more than just a one-hit-wonder.

Be the first to review “Sabrina: All of Me 7″ near mint vinyl. UK 1988. Check video & Check video of the actual single for sale. Sabrina Salerno” Cancel reply 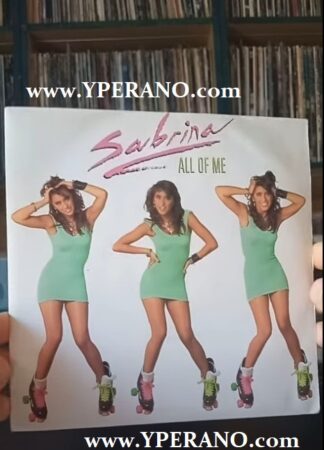 You're viewing: Sabrina: All of Me 7″ near mint vinyl. UK 1988. Check video & Check video of the actual single for sale. Sabrina Salerno € 6.59
Add to basket