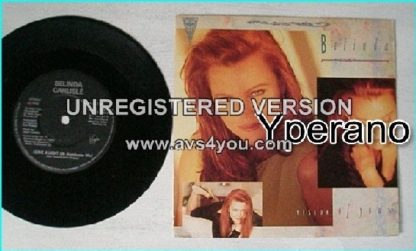 Belinda CARLISLE: Vision of you + Leave a light on (Kamikazee re mix) 7″. Check videos

“Vision of You” is the fifth single from Belinda Carlisles Runaway Horses album, released in 1990.
A video clip was also produced featuring both live footage of the songs performance and tour material shot during her Asian tour. The single was a remixed from the album version, giving it a more uptempo sound. The song was the lowest charting single from the album. In the UK, it only managed to reach #41 but was a hugely popular radio hit, it was re-released a year later after the success of “(We Want) the Same Thing” and “Summer Rain”, but it charted lower at #71.
In 1992, US Singer Jennifer Rush recorded the song for her Jennifer Rush album. It was released as a single in Europe in 1993 and was also recorded in Spanish. Another cover was also recorded and released by Tony Award-winning musical actress Lea Salonga in 1993. The song appeared on her self-titled album the same year.

Be the first to review “Belinda CARLISLE: Vision of you + Leave a light on (Kamikazee re mix) 7″. Check videos” Cancel reply 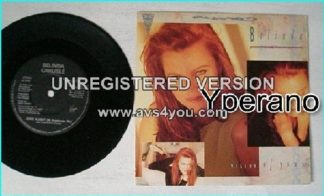 You're viewing: Belinda CARLISLE: Vision of you + Leave a light on (Kamikazee re mix) 7″. Check videos £2.99
Add to basket