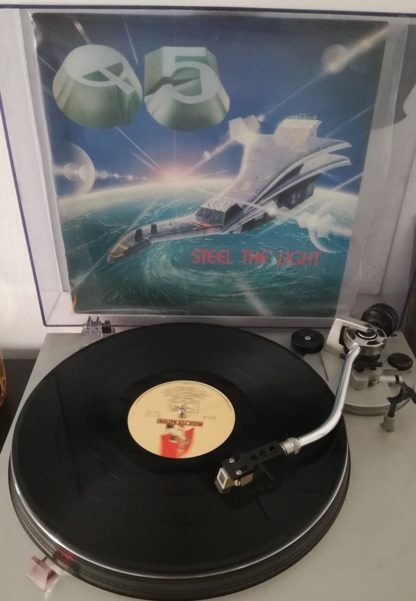 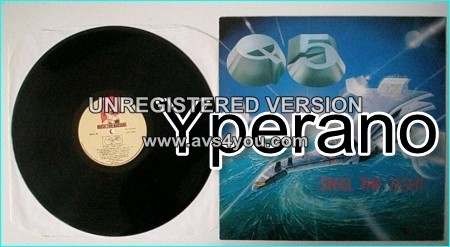 Q5: STEEL THE LIGHT LP 1985, MFN 39 masterpiece. Seriously you have to have it. CHECK VIDEOS. HIGHLY RECOMMENDED 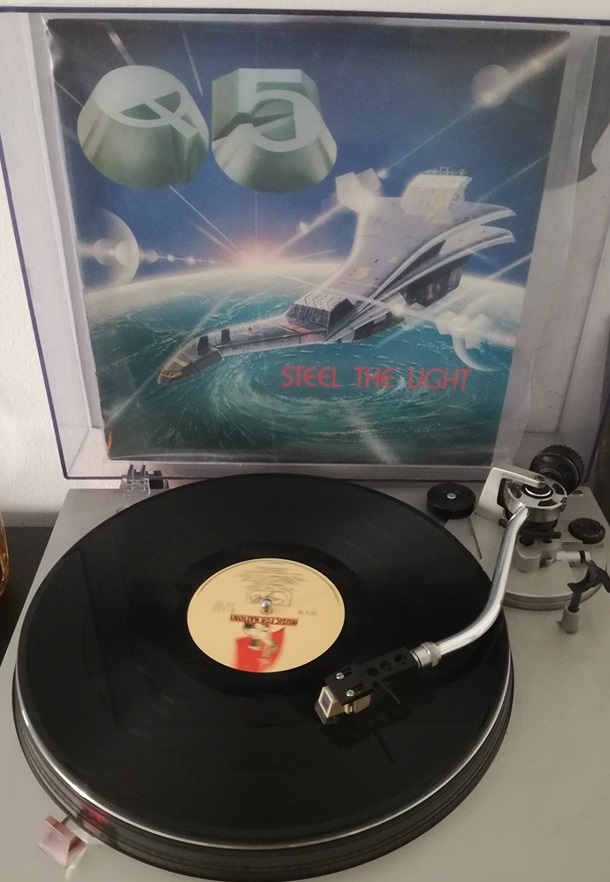 Sometime in the early 80’s in the city of Seattle, long before it was fashionable to wear check shirts, look miserable & pull shotgun triggers with your big toe, there existed a band which was led by the inventor of the Floyd Rose whammy thingy (Hey I just listen to guitars, I don’t fix the things) so beloved of plank spankers the world over named coincidentally, Floyd Rose. Now Floyd had a plan “”I want to show off this whammy thingy I’ve invented & the best way to do it would be to form a loud, hard rockin’, kick ass rock band”” he probably didn’t think to himself, but that’s exactly what he did anyway & let me tell you brothers & sisters they were a loud, hard rockin, kick ass rock band, at least for one album anyway, but more on that later.

The fledgling band entered the studio in early 1983 to record a seven track album quality demo which brought them to the attention of Heart’s then management team. The band then set about recording a full album but decided to only include three songs from the demo along with six new tunes. ‘Steel The Light’ as the album was christened was picked up by Albatross records but it was only when ‘Music For Nations’ in Europe released it with a new cover that it came to the attention of the Metal community, and what an album.

The album opens up at a frenetic pace with ‘Missing in action’ a great riff driven rocker where the helium voiced Jonathan K. struggles manfully to be heard over the rest of the band who are obviously in full heads down mode. Cracking stuff. Next up comes “”Lonely Lady”” a tale of a man’s quest to help a lady with “”ISSUES”” as the yanks would say find true love, or some shite like that. What we have in fact is a great song with some nice harmony guitar & vocal lines that is built on a crunchy riff that drives the song along.

What follows is the tune that would prove to be Q5’s defining moment & the millstone around their collective necks. ‘Steel The Light’, the title track is an epic in the best traditions of ‘Kashmir’ & ‘Stargazer’. Clocking in at an impressive 6mins 8 secs this really is one belter of a tune which highlights how the individual band members suited each other. Once Again Jonathan K. is outstanding & Floyd Rose isn’t far behind him. From the moody intro through the opening line of “”Fallen Angels & fallen dreams pay the price of history. The Gods declared that man live by night & never shall he see the light””. It’s quickly obvious we’re not talking Warrant here. Of course the lyrics are Sword & Sorcery bollocks but they do compliment the music so well. This was released as a single with a live non album track on the ‘B’ side. As I say this song proved difficult for the band to better & still remains their best known track.

Next up is ‘Pull The Trigger’ which opens with the unforgettable couplet “”Get ready to meet your maker, make a date with the undertaker””. Yet again the band came up with a cracking heads down & ROCK metal track which chugs along at a fair pace recounting the story of an assassin on a hit. Floyd Rose really puts the whammy bar that bears his name through its paces on the solo but never descends into a Steve Vai widdle-fest or overstaying his welcome. Jonathan K’s vocals make AC/DC’s Brian Johnson sound like Barry White they are so high. Majestic.

‘Ain’t No Way To Treat A Lady’ is the first of the tracks from the Demo is up next & you can see why they kept faith with it as it’s a belter of a scream-along as the band once again rock out to their heart’s content. Once again you have to marvel at the screaming vocals which propel this along. In comparison the songs that follow, ‘In The Night’ are islands of restraint in an ocean of over the top ROCK Excess. The first of the pair is a groove laden piece that rumbles along with some multi tracked vocals piled on to add to the melodious nature of the song. ‘Come & Gone’ could have been another typical 80’s power ballad (spit) in the hands of any other band from the time but in the hands of this great band it never descends into being just another cheesy attempt to make a “”Hit”” single & is in fact, don’t tell anybody I said this, quite beautiful. You see they even did the cliched stuff better than just about anybody else.

Normal service is resumed on the penultimate track ‘Rock On’, an everyday story of a wannabe Rock Star explaining his purpose in life “”I wanna ROCK ’til the day that I die”” to some unbeliever. Never a truer sentiment expressed in song. Keep it metal my friend.

The album closes with the other side of the coin as the narrator of the song encourages a “”Teenage Runaway”” to follow his Rock ‘n’ Roll dreams of getting on stage & finding “”Ten Thousand people scream your name””. This ends the album on a positive note & it doesn’t take much to hit ‘PLAY’ again for another blast of this fantastic album.

This album was released in 1984 & made it to number 12 in that year’s Kerrang!! Top albums of the year & sold pretty well all over Europe. The band released a second album two years later called “”When The Mirror Cracks”” which dispensed with most of the heavier aspects of ‘Steel The Light’ & instead concentrated on that most devilish of mid-80’s instruments, the wedding band keyboard. Instead of creating another metallic masterpiece they went all (I can barely say it) commercial. Surprisingly enough it is still a great album & for a long time I thought it was the better of the two but I’ve since seen the error of my ways & I now give the debut the nod.

According to Rick Pierce the rest of the band decided that it would be wiser to stay in the studio “”indefinitely”” as opposed to touring Europe when the album was “”climbing the charts”” & a third album was rejected by their American record company who wanted the band to return to the studio “”to do something more commercial””. Pierce & Jonathan K subsequently left the ban to form the much heavier ‘Nightshade’. This basically ended the band & nothing more was heard from Q5. And so the story ends.

Be the first to review “Q5: STEEL THE LIGHT LP 1985, MFN 39 masterpiece. Seriously you have to have it. CHECK VIDEOS. HIGHLY RECOMMENDED” Cancel reply 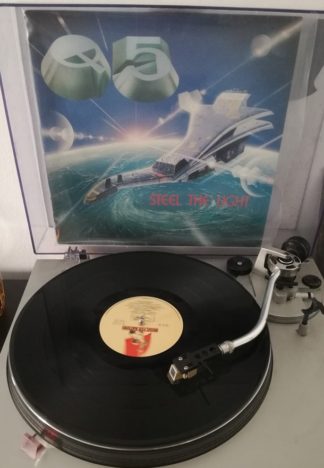 You're viewing: Q5: STEEL THE LIGHT LP 1985, MFN 39 masterpiece. Seriously you have to have it. CHECK VIDEOS. HIGHLY RECOMMENDED £13.00
Add to basket