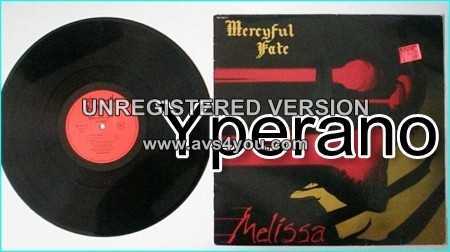 All of Mercyful Fate potential was fulfilled on Don’t Break the Oath, a doomy, Gothic collection of post-Priest/Maiden black metal preoccupied with Satan and the occult. Hank Shermann and Michael Denner keep their progressive rock tendencies reigned in while still delivering plenty of the neo-classical feel that gives the music its atmosphere, and King Diamond uses his vocal range to great theatrical effect. Fate sound and attitude were highly influential on later Gothic/black metal bands, especially in Europe, and Don’t Break the Oath consistently encapsulates their appeal.

When came the time to do the lead vocals, King brought a little altar in the studio and some red lights as there was a specific feeling he wanted to create.

The first 20 seconds of Melissa – featuring crunchy, pulsing guitar riffs pierced by frontman King Diamond’s impossibly high helium-voiced scream – make up one of the most captivating sequences in metal history. It hooked Metallica, who hung out in the Danish heavy metallers’ rehearsal studio when recording Ride the Lightning, and bewitched Slayer, whose Kerry King had called his band’s Hell Awaits “a Mercyful Fate record.” At the time, the band sounded like a steroidal Judas Priest leading a black mass. On “Evil” alone, the theatrical singer, whose wild face paint made him look like Gene Simmons on bath salts and whose mic stand was made of a human skull, sings about necrophilia amid Hank Sherman’s forceful, caffeinated “Eye of the Tiger”–like riffs, leading to a thrilling guitar showdown between Sherman and Michael Denner. Throughout the record, King pulls off incredible acrobatic vocal feats, thanks to his four-octave range, whether he’s wailing about Halloween (“At the Sound of the Demon Bell”), inviting you into his witches’ coven with a growl (“Into the Coven,” one of the PMRC’s “Filthy 15”) or invoking ancient Egyptian voodoo (“Curse of the Pharaohs”). “I know people like to be scared just a little bit and they like that because they go watching all the horror movies,” King Diamond said of his lyrical shock appeal, circa 1987. “Just take it as horror stories, that’s all.” Elsewhere, he hails Satan literally (“Black Funeral”) and whispers creepily about a dead witch named Melissa (“Satan’s Fall”), portending the spate of Norwegian black metallers who painted their faces and burnt down churches. Satan may not be real, but King Diamond is. K.G.