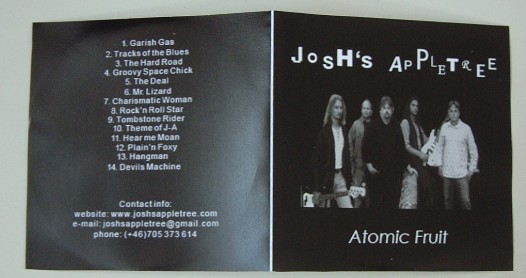 JOSH’S APPLE TREE: Atomic Fruit The new Led Zeppelin? they’ve certainly taken a lot of their swagger from the overrated seventies beat combos second album. they then head rapidly off into Uriah Heep and Deep Purple territory, ramping it up with some Monster Magnet riffing and lots of crazy songs about magic mushrooms, bikes and chicks. This seems like an excellent way to pass the time. It certainly makes a change for a Swedish band not to be releasing a death metal album and this is a highly enjoyable classic rock release. In my world you can’t go far wrong with songs called “Groovy Space Chick”, “Rock & Roll Star- and – Plain – Foxy-. The production is a bit muddy, but this is a self released album, so they can be forgiven. Vocalist Lasse has a fine blues holler -“ not surprising when he cites Warren Haynes, Leslie West, Steve Overland and Jimmy Barnes as influences -, John whips out his Hammond and drenches the songs with some fine Ken Hensley moments and guitarist Hawkan knows how to rip up a riff. Fourteen tracks are perhaps 3 songs too many, but at its peak, in places it’s almost like Paul Rodgers has been jamming with Jon Lord and Dave Wyndorf, and that would be a mighty fine place to be. An unexpected delight.

A fantastic Swedish band. I do not know the year of release, sorry. Just guessed. Great organ driven classic rock.

It’s no secret, that Sweden is a a highly creative musical ground for all different kinds of rock bands since the late 60’s. In current times, groups like Abramis Brama, Witchcraft, Burning Saviours and Siena Root, just to name a few, differ from each other, but they have in common a huge likeness for early-70’s heavy rock and have captured an authentic vibe of that musical period. Now we have the self-released debut from JOSH’S APPLETREE, another Swedish hardrock band, whose members had learned their 70’s lessons as well as the above mentioned bands. And although they don’t come up with a total vintage sound, all 70’s trademarks are in best place. An occasional hammond organ, that reminds me to Deep Purple and Uriah Heep, and a powerful bluesy singer who would also fit to every hardrock gang. But while other bands are more influenced by the early 70’s album of Deep Purple f.e., JOSH’S APPLETREE are more focused on the later output like “Perfect Stranger” or “House Of The Blue Light”.

At times, I really like “Atomic Fruit” because this five-piece is a very tight and heavy band with nice grooves and a solid songwriting, but I have to critize two things about the album. Firstly, the album contains fourteen songs, and that’s definitely too much! After the seventh song, it looks as if the band is running out of ideas and the album becomes more repetitive from song to song. Another thing I don’t like here are the lyrics, dealing with the usual topics as sex, drugs and rock’n’roll, but delivered in the most uninspiring way. Sorry guys, it’s not that I hate cliches, but for my taste the lyrics are too silly. But maybe I’m just a pseudo-intellectual idiot and I don’t own a big motorbike, because huge biker-festivals are a good place for a JOSH’S APPLETREE show, due to aforementioned reasons. But apart of my critic, the band has released a good debut and under the surface lurks enough potential, so they can do it much better. 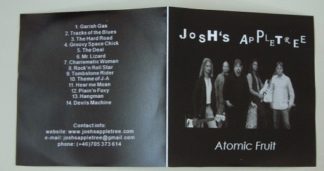