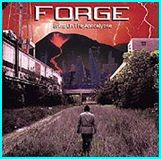 FORGE: Bring on The Apocalypse

Check every single song from this audio playlist. Check all 12 songs

This 12 song CD blasts out Forge’s dynamic combination of heavy, metallic yet melodic loud rock. This album is meant to be played on 10! “Bring on the Apocalypse” tells tales of heroism, war, revolution and sacrifice. Forge succeed in taking old school metal into the future with a new attitude and sound. FORGE is one of the most successful groups in Detroit’s heavy rock scene. Forge has made an impact not only in their hometown, but in the Midwest region. They are known for their high energy intense live shows and enduring spirit. Forge features a heavy sound that has intelligent and meaningful lyrics. Yet, a good melody seems to make the group stand apart from many bands of this genre. Forge won “Best Metal Band” award in the 2004 Detroit Music Awards.

5.0 out of 5 stars Putting the PEDAL TO THE METAL!,
In the past two and a half years, Forge have been through many changes in the lineup. No wonder BRING ON THE APOCALYPSE took so long to come to us (four years!)- they have finally gotten what I consider to be the perfect flow. BOTA is amazing- from the heavy guitars to the hard-hitting drums, from singer Aaron Greene’s uniquely aggressive voice to the thunderous bass- Forge have fans right where they should be- completely enveloped in their enormous wall of electrifying sound. Put the pedal to the metal, because Forge are back, bigger and better than ever, and it will blow you away!

5.0 out of 5 stars Giving hope to an otherwise hopeless scene,
Anyone who’s a fan of music, especially heavy metal, who lives in the general area of Detroit knows how lackluster the scene here is. So far Detroit’s only well-known offering to metal has been the painfully unoriginal Black Dahlia Murder, and trust me, it just gets worse from there. Back when nu-metal was the big thing, Detroit was overrun with band after band completely biting off of The Deftones or Korn, or both. Now that metalcore is the new big thing, every Detroit “”metal”” show is filled with bands trying to be the next Eighteen Visions or Hatebreed. Forge is one of the very few bands in Detroit that gives a refreshing sense of originality and dynamics to the disgruntled Detroiter begging for some decent local music. A driving force in the local metal scene, Forge is one of the hardest working bands in the area, and it shows on their new cd. With the addition of a second guitarist, Bring On The Apocalypse is a far cry from their previous cd Trials. It’s heavy, hard-hitting, but in true Forge fashion, still shows an incredibly eclectic variety of influences, from Thin Lizzy to Clutch to Dead Kennedys to Manowar and beyond. What we’re presented with is a balls-to-the-wall, in-your-face metal CD that truly can not be placed in any genre. Highlights of the album include Defenceless (a head-banger in the truest sense of the word), and the fist-pumping title track.

5.0 out of 5 stars best CD I’ve bought in a while
This CD is great!!! Best one I’ve bought in months. It is a breath of fresh air from every radio band that is rammed down your throat. Heavy, driving and original.

5.0 out of 5 stars Amazing & Fresh,
Forge blends meaningful lyrics with classic metal instrumentals for a truly unique sound. The new Album is by far their best work. The new members, John Dearry on guitar, and their new drummer Joe Smith, add an element of technicality and pure energy to the band. This album is most definitely a must have for anyone who is looking for a great blend of many musical influences and styles.

5.0 out of 5 stars They just keep getting better!,
I bought this album a bit over a week ago when it came out, and I haven’t been able to stop listening to it since. Aaron Greene (vocalist, guitarist, and main lyricist) has definitely learned to get deeper in his song writing for this third and far, far from last great Forge album”