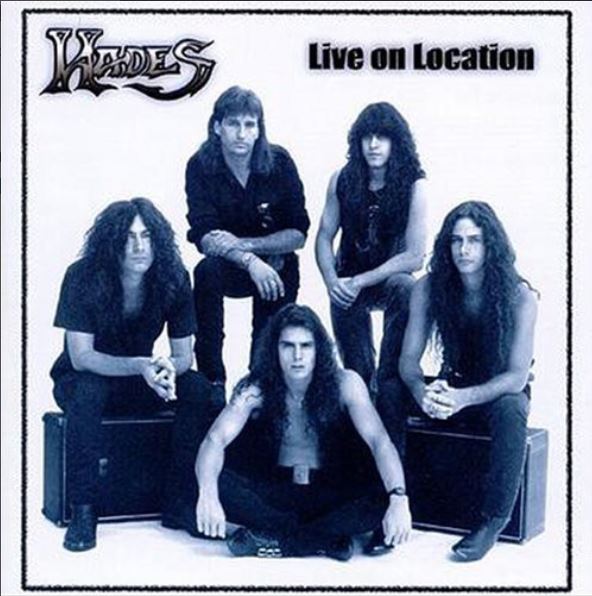 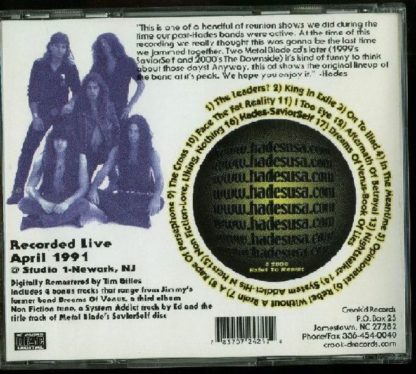 Best HADES CD ever. This reissue of this classic live CD from 1991 has been re-mastered and re-released with new artwork. Four bonus tracks are also included!! They are: 1) System Addict – His N Hers (Ed Fuhrman’s band), 2)Non Fiction – Love, Liking, Nothing (Alan Tecchio’s and Dan Lorenzo’s former band), 3) Hades – SaviorSelf, and 4) Dreams of Venus – Book of Lies (Jimmy Schulman’s former band)

Hades – Live on Location
Label: Crook’d Records- cr0005
Format: CD
Country: USA & Canada
Released: 2000
Genre: Heavy Metal
Tracklist:
1 The Leader
2 King In Exile
3 On To Illiad
4 In The Meantime
5 Opinionate!
6 Rebel Without A Brain
7 A
8 Rape Of Persephone
9 The Cross
10 Face The Fat Reality
11 I Too Eye
12 Aftermath Of Betrayal
13 Nightstalker
14 System Addict-His N Hers
15 Non Fiction-Love
16 Hades-Saviorself
17 Dreams Of Venus-Book Of Lies

cr0005 featuring 2 more tracks than any other releases

5.0 out of 5 stars HADES live
Live On Location was their third CD…it was recorded AFTER the brake up in 1989 when Alan and Dan went to Non-Fiction. The bass on this CD is too loud…so it’s one of my favorites. You get to hear the original opening for “”Rape of Persephone”” before Metallica used it for Enter Sandman!

5.0 out of 5 stars ”HEAVY AS HELL ” !
IF YOU ARE AN OLD SCHOOL METALHEAD, THEN YOU WILL SURELY REMEMBER THESE GUYS.
THIS GREAT LIVE CD HAS ALL THEIR CLASSIC SONGS.
THEIR SOUND WAS FAST AND HEAVY, ALAN TECCHIO’S INCREDIBLE VOICE, AND THE FACT THAT THEIR LYRICS HAD MACBETH ORIENTED LYRICS MADE THEM A GREAT BAND!THEY WERE AN AWESOME BAND TO SEE LIVE, WHICH IS EVIDENT ON THIS CD! ALL THEIR CLASSIC STAPLE SONGS ARE FEATURED ON THE CD, AND COOL LINER NOTES AS WELL. SO GET WITH THE PROGRAM AND GET ONE OF THE BEST METAL HAD TO OFFER!THESE GUYS ARE INCREDIBLE, AMAZING, FULL OF TALENT!
SO IF YOU LIKE ”NEVERMORE ” ”ATTACKER ””HELSTAR” ”CAGE ” ”AGENT STEEL ” AND ALL THE OLD SCHOOL POWER METAL BANDS , THEN YOU ARE SURELY IN FOR A REAL TREAT!!THESE GUYS HAVE TO BE HEARD TO BE BELIEVED! THEY ARE JUST THAT DAMN GOOD!!
===========================================================================================
This disc is a live CD by the band Hades, but it does have several bonus studio cuts included. The live recordings are quite good, and the band’s style ranges from thrash to Iron Maiden stylings to Rush-ish textures. Only one real complaint can be made about the live cuts: Some of the vocals are a bit on the awkward side. However, there are other vocal segments that are quite powerful and very reminiscent of Bruce Dickinson. The studio tracks are a mixed group, not really being necessarily by Hades, but related recordings. The last of those is the best, starting off in a Hendrix style and then sounding so much like early Black Sabbath that it is uncanny.” 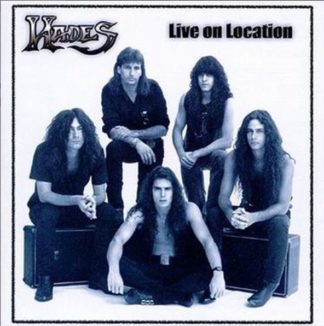