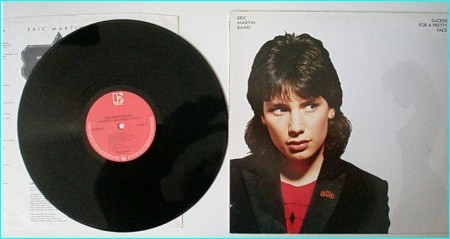 Eric is best known as the vocalist of the (reunited) hard rock band Mr. Big, the multi-talented super group that produced the 90s hit ballad “To Be With You”, a song that Eric wrote in his teen years. Eric solo albums exemplify Eric unique soulful voice and candid lyrics.

Top notch AOR from the Mr. Big vocalist Eric Martin, in the vein of Loverboy and similar! EMB debuted their first album in 1983, entitled âSucker for a Pretty Faceâ. The LP received a gold disc, and consequently led to the bandâs appearance in American Bandstand and in various arena tours as the opening act for the likes of ZZ Top, Night Ranger, and Journey. Despite continuing to land high-profile gigs as support for some of the most popular acts at the time, the band decided to split up in 1985 after returning from the ZZ Top tour. Eric went on to have a successful career as a solo artists, session artist and member of the band “Mr Big”.

5.0 out of 5 stars In the beginning there was Eric Martin!,
Eric Martin album Sucker For A Pretty Face introduced us to the magical voice that eventually became the sound of the future super group Mr Big. The music here is eighties rock with some nice guitar solos and piano synth sounds reminiscent of the era. Highlights include the rocking chorus of “”Private Life””, the classic ballad “”Letting It Out””, the Jackson 5 vibe of “”One More Time””, and the sentimental ballad “”Love Me””.

5.0 out of 5 stars Eric Martin, pre-Mr. Big)
Released in 1983, Sucker for a Pretty Face was the dÃ©but album from the Eric Martin Band. Martin, of course, is better known for his work in Mr. Big, but he had a memorable solo career before joining that band.

Eric Martin early solo work actually reminds me quite a bit of his future band mate Billy Sheehan early work in Talas. It rock, but a very radio-friendly, pop-oriented kind of rock on par with bands like April Wine, John Waite and Journey. It very melodic, there are plenty of keyboards, and Eric Martin of course sounds terrific. There just isn’t much “”punch”” to these songs – there no “”Addicted to that Rush”” here. Still, I’m a big fan of the `80s AOR sound, and really enjoyed this one.

Fans of Martin work in Mr. Big will probably get the most out of this one, but I’d also recommend Sucker for a Pretty Face to anyone who still enjoys the pre-hair metal `80s rock sound, whether you call it melodic rock, pop/rock, AOR or arena rock.

5.0 out of 5 stars Not an Eric Martin solo album!!!,
This was a BAND, not just a good singer with a back up band. 415 began as Mile Hi in the East SF Bay Area of CA in the 70. I used to see them as a teenager in a small club in Hayward. Great band, and EM has a fantastic voice,too bad it fell apart. You can catch 415/EMB guitarist John Nymann in Y&T these days.

5.0 out of 5 stars This is great 80 classic rock! You’ll love it,
I remember Eric Martin from when I was a teenager growing up in the SF Bay Area, and I used to sneak into clubs to watch him all the time. I wish the band hadn’t broken up, but I’m glad Eric and his golden pipes are still around. If you like Mr. Big, you’ll really love Eric Martin Band.

5.0 out of 5 stars One of my top three favorite albums!!,
I bought this record back in 1983 after the band was featured in an issue of the JourneyForce newsletter (Journey fan club). Journey helped them record this release. I’ve loved it ever since (I bought Aldo Nova, Subject the same day…it also on my top 3 list). I didn’t really follow the band after that…including Eric solo stuff. I do have Mr. Big greatest hits…but never dove into each of their releases.

Interesting note: I meet Troy Lukeeta (EMB drummer) in Biloxi, MS at the mall with the rest of Tesla…they were there to open for Poison that night in concert. I had told him a had remembered him from the EMB. He seemed taken back that someone would remember him from EMB…maybe he was even scared that I might be a stalker, lol. Anyway…I still have his autograph somewhere.

Back on message: this record is pure 80 pop rock! Every tune is easy to listen to and is enjoyable from start to finish. I would recommend this release to any fan of melodic 80 rock.

5.0 out of 5 stars Great CD!, Great rock from the 80s. Listen to it often. RIP, Mark. You were the best! Every band member brought so much to the table on this project. Eric Martin is a world class vocalist. Johnny Nyman awesome guitarist, and certainly one of Troy Lucketta earliest recordings, classic rock at its best!

5.0 out of 5 stars flat out perfect 80 aor rock,
To think a 23 y/o could make a record like this is scary. think a cross between rick springfield and loverboy. great stuff indeed.

5.0 out of 5 stars Local band goes BIG,
The only unsigned act at Day On The Green July 4, 1981, with headliners Heart/Pat Travers/Blue Oyster Cult/UFO/OZZY/415 (Eric Martin Band)These local boys rock! They often played in the Bay Area club scene,(Wolfgang) and frequently opened up for Nightranger, and Journey. If you like those groups, you’ll love this one. Unfortunately Eric has not released those precious gems of 415 golden songs, nor the EMB II album, as Eric left the group for other projects (solo, Mr. Big + other collaborations…Sammy Hagar)so this remains the only authorized edition of that great era. many other great tunes were performed live. “”Don’t Stop”” Rocks hard with attitude. “”Sucker…”” was their big single and most requested favorite. “”Letting It Out”” was their famous love ballad (I remember seeing it on American Bandstand!)These guys guitar-rocked with a soulful edged-vocals.
The Japanese version has live tracks, and is the one to get! Unfortunately in 1984 Eric left to pursue his own dream. Their drummer Troy Luccetta joined Tesla, Eric did solo appearances, then hooked up with Mr. Big. Alas the other members saw no royalties from the re-released “”Sucker””, and have since struggled to get by. This is a great collection of pop-rock songs, “”Catch Me”” is an awesome tune as well. Hearing these reminds me of the FlashDance era, “”Ten Feet Tall”” good tune to aerobicize to.

5.0 out of 5 stars Has me wanting more!,
I first saw EMB perform tracks from this album 15 years ago when they played at my northbay highschool. Then and there I was hooked. I just saw Eric Martin perform last night in Petaluma and his voice is even better than I remember. (So how come he didn’t make it bigger than he did?) He played Don’t Stop and it has me wanting to hear them all again. However, I can listen to it because I have it on vinyl. Now I have to wait until the LP gets shipped.

Although the name Eric Martin is synonymous with the platinum selling melodic hard band rock band Mr. Big, there was a time when he was just another struggling singer, one of many trying to get a shot at the big time. Eric’s calling card was, and still is, a one in a million voice; a golden rasp blessed with a silky smooth delivery that would eventually establish him as a contender for serious chart action. The Eric Martin Band were initially formed in 1979 under the name of 415 and played hundreds of shows at area nightclubs, beer parties, even high school and college dances, before eventually headlining San Francisco’s premiere night club – the Old Waldorf. Selling out in advance, word quickly spread about about their dynamic live shows and soon the band were opening for established acts like Billy Squier, Hall & Oates, Rick Springfield, Molly Hatchet and Foreigner, to name a few.Due its success, 415 was signed on to Elektra/Asylum Records under the management of Walter “Herbie” Herbert, Ron Chiarottino, and Sandy Einstein. These three persons managed and worked for the band Journey. The management decided to change the name of the band to the “Eric Martin Band” (EMB), as singer-named bands were popular during that time. Produced by Kevin Elson (Journey) and Rodney Mills (.38 Special) the Eric Martin Band (including future Tesla drummer Troy Luccketta) released their debut “Sucker For A Pretty Face” in 1983.

Containing a superb selection of fuel injected melodic rock songs, including ‘Ten Feet Tall’, the Frankie Miller penned ‘Don’t Stop’ and the anthemic title track itself, the LP received a gold disc certification, and consequently led to the band’s appearance on American Bandstand and in various arena tours as the opening act for the likes of ZZ Top, Night Ranger and Journey. But despite continuing to land high-profile gigs as support for some of the most popular acts at the time, EMB decided to split up in 1984 after returning from the ZZ Top tour, as Eric Martin wanted a solo career which successfully started in 1985 until he went into Mr. Big in 1988.A must for ’80s US Melodic Rock fans, Eric Martin Band’s “Sucker For A Pretty Face” is plenty of hooky rockers highlighting Eric’s awesome vocals.Highly Recommended