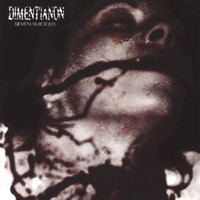 Check all songs from this playlist (whole album):

The beginning track “”Self Inflicted Abuse”” opens the CD with a high pitched distortion then the guitar, followed by drums. Vocals come in , with that black/death style but not so monotone seen so commonly in bands of this nature. The prize song on this CD however is “”Souless Extinction”” beginning with cow bells. the lyrics are not as lengthy as the others , but the song definitely stands out. “”Brotherhood of the 7th day”” is the fifth track and serves as a sort of break from the otherwise heavier tracks. All the songs lyrics have a common theme of death, suicide, homocide etc. The songs also follow a sort of generic style of fast drums, longer strenuous guitar and an occasional break down. The gritty and dirty sound as well as look of the album just add to the overall depressing , homocidal, and suicidal theme of the album. Despite some of the generic stylings of the album , it is still great and a must have for anyone deeply into the underground scene.
What a glorious mess…
Dimentianon’s latest CD is a hammer-smashed mess of strange melodies, sinister aggression with a rather twisted set of lyrics. This release though IS a pleasant surprise of sounds, lyrics and artwork that all built itself into a spire of hatred and filth that few could ignore.
The boys are obviously talented musicians and play furiously. The vocals creep and crawl with an appropriately sinister fashion creating a mood of violence and emotional disrepair. Brilliant! The production may turn a few off, but as the old saying goes when used in terms of “”darker”” or “”necro”” production… “”IF IT’S TOO HEAVY YOU’RE TOO WEAK!”” The sonics, while unconventional, are absolutely stunning on this recording.
Dimentianon have many new directions to explore after this CD thankfully, as this one, like an good statement, leaves the band open to make even MORE (even fiercer) statements. In a world where extreme metal is often devoid in terms innovation and is constantly backing itself into a corner, Dimentianon is opening doors to a frightening sonic landscrapes that simply HAVE to be explored.
Buy this or die.