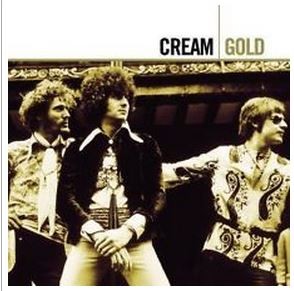 Cream Gold is a two disc Cream compilation album, and was released in 2005 to help celebrate the bands reunion at the Royal Albert Hall. It was a part of the larger Gold series.
The first disc consists of twenty-one studio tracks, with the second featuring eight live tracks.
The tracks come from the bands four studio albums: Fresh Cream, Disraeli Gears, Wheels of Fire, and Goodbye, as well as Live Cream and Live Cream Volume II (which were released after the bands break up).
Gold was also released under the name I Feel Free Ultimate Cream, reaching No. 6 on the UK Albums Chart in May 2005. This version was available both as a two-disc release identical to Gold, and as a “limited edition box set” with Creams 2003 BBC Sessions album included as a third disc.

There has been no shortage of Cream compilations over the years — as a matter of fact, they far outnumber the groups actual albums, of which there were merely four (true, they were recorded during an insanely productive two-year lifespan) — but 2005s Gold is arguably the best of the lot. Released as part of Universals ongoing Gold series, Creams instalment spans 29 tracks over the course of two discs, with the first CD being devoted to their studio work (it weighs in at 21 tracks) and the second devoted to live recordings (it runs only eight songs, which illustrates how much they improvised in concert). Not only are all of the usual suspects here — the hits “I Feel Free,” “Strange Brew,” “Sunshine of Your Love,” “Tales of Brave Ulysses,” “Badge,” “Swlabr,” “Crossroads,” and “Politician” — but this includes such gems as “World of Pain,” “Passing the Time,” “Doing That Scrapyard Thing,” and “What a Bringdown.” While there are a handful of cuts that might have deserved inclusion — chief among them “Four Until Late,” “Take It Back,” and “As You Said” — everything essential is here, and each disc draws a near-definitive portrait of what the group achieved on-stage and in the studio. As a (relatively) concise overview, Gold can’t be beat — it tells you everything you need to know about this legendary supergroup.