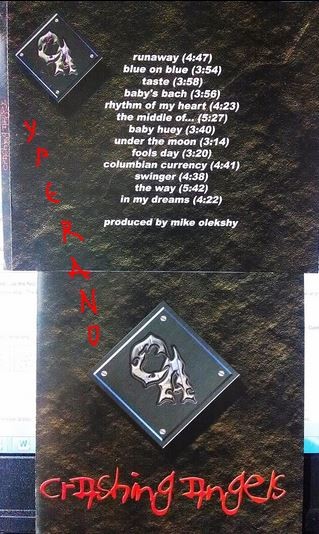 Very talented quintet from Vancouver, Canada. Heavily tinged with early 90s hard rock influences, yet Crashing Angels can offer a couple of tracks such as the infectious ‘Runaway’, ‘Babys Bach’ and ‘Taste’, that wouldn’t be out of place on mainstream rock radio or even college radio. Actually, most of Crashing Angels debut borders very nicely on the line of hard-edged pop/rock and out ‘n’ out pulsating hard rock. You’ll find more than a pinch of Dokken, Ratt and fellow Canadians Krystal in ‘Rhythm Of My Heart’, ‘Fools Day’ and swinger’. On ‘Columbian Currency’ they dabble with straight-laced melodic rock and do a fine job. Guitarists Neil Park and the other) interestingly named (guitarist) mmo put in admirable performances, especially in the lead breaks which ooze that wonderful late 80s, early 90s hard rock energy. Vocalist Dean Tesatura has a voice that fits well with whatever direction the material is going. I hope that they will keep plugging away as they have a sound that will appeal to both the die-hard hard rock fans and fans of the current melodic pop/rock acts. 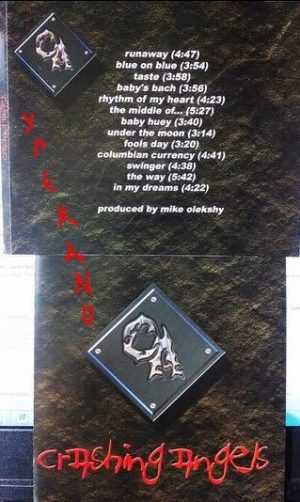