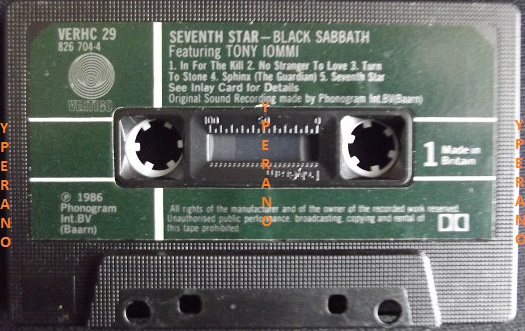 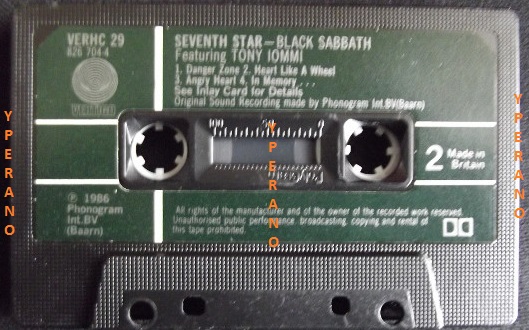 Black Sabbath Featuring Tony Iommi – Seventh Star
label:  Vertigo – VERHC 29, Vertigo – 826 704-4
Format: Cassette , album
Country: UK
Released: 1986
Genre: Heavy Metal, Hard rock
Tracklist
A1 In For The Kill
A2 No Stranger To Love
A3 Turn To Stone
A4 Sphinx (The Guardian)
A5 Seventh Star
B1 Danger zone
B2 Heart Like A Wheel
B3 Angry Heart
B4 In Memory …

I really like this album and regard it as a welcome edition to my Sabbath collection,albums got some really good songs on it and Tony provides some great riffs.Some fans didn’t take to this album for whatever reasons maybe cos Ozzys not on it, don’t know.Amazon are selling this album at a great price and its a good buy for your collection.I am trying to get hold of Headless Cross at a reasonable price so far no luck,maybe this album will go the same way that one day you will battle to get it.I recommend Seventh Star as a good album.
Hope review is of some help.

Seventh Star (1986) is often dismissed as not being a `true’ part of the Black Sabbath catalogue due to the fact that it was initially intended as a Tony Iommi solo album but, due to record label pressure, ended up being released under the Sabbath moniker. Well, if you’re a hard rock fan there’s far too much quality music on offer here to merely dismiss. Admittedly, it’s nowhere near as heavy as previous Sabbath releases and Iommi is the only original member present, but if you can get over these two stumbling blocks there are some great tracks to be listened to, enjoyed and appreciated on Seventh Star. In my opinion, this album is far better than its patchy predecessor (1983’s Gillan fronted Born Again) and displays Iommi’s magnificent versatility as a song-writer coupled with the awesome vocal talents of Glenn Hughes. All of the cuts are first-rate (even the distinctly un-Sabbath No Stranger To Love is a grower). Special mentions should go to the galloping opener In For The Kill, an immense title track and a menacing Danger Zone. The album’s master-stroke, however, is the majestic closing combo of Angry Heart and In Memory. The way the forlorn but stomping former merges into the haunting latter is pure evocative genius. Over 20 years since its release this album may sound noticeably `80’s’ but if, like me, you don’t view that as a negative factor, I strongly recommend Seventh Star. Genuine Sabbath or not, this is a superlative collection which should be judged on nothing other than its own merits!”