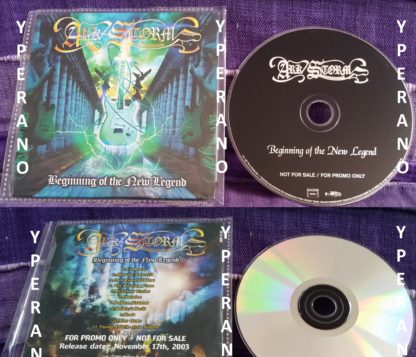 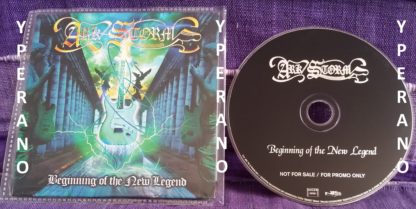 Ark Storm is a Japanese band led by the fleet-fingered Katsu Ohta that plays neo-classical metal in the style of Adagio, Space Odyssey and Symphony X. Of course, a strong Yngwie Malmsteen and Rising Force influence is always going to be uppermost in peoples mind with this style of music. Beginning Of The New Legend is the groups second album, following “No Boundaries” and Ohta impresses with his amazing fretwork, spicing up his Malmsteen-isms with his own custom flavorings. A nice inclusion is the two-minute bass solo “Evolution”, with Isamu Takita showing even the four-string low-end can dazzle. Former Sabel Tiger lead man Yasuo Sasai is the vocalist of Ark Storm, while instrumental fans will love “Rood” and the two bonus instrumentals that close the album, “Serch For The Hidden Treasure” (love that spelling) and “Roar Of The Pharaoh” – a trifecta that alone would justify a hard listen.

5.0 out of 5 stars Proves that solos are not dead…,
I did not know what I was in for when I picked this. I find that it has the classic sound of the 80s metal (mostly Iron Maiden). But anyway, its a great record, not 1 bad song on it. Evolution(Track 6), is a bass solo which blew my mind. I played it at wormk to a guy who plays bass, he creamed in is pants. This IS a masterpiece, i don’t know if i’d pay $44 for it, but if you see it for a reasonable price, then I demand that you buy it. btw, every song has a solo, if not more.

5.0 out of 5 stars Japans own Yngwie returns with his second album,
The leader of Ark Storm is Katsu Ohta. In fact, the band is apparently officially, “Katsu Ohtas Ark Storm”, rather like how some of Yngwie Malmsteen albums are credited as “Yngwie J. Malmsteens Rising Force”.
Katsu continues to deliver top-notch shredding and the songs are quite listenable.
While I hate to keep mentioning Yngwie (as I’m not trying to slag Katsu), theres no question in my mind that fans of Yngwie and Rising Force will really like this CD. 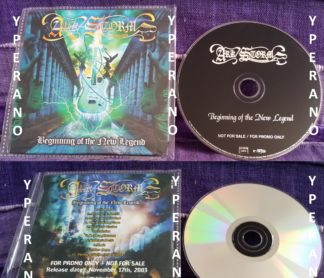