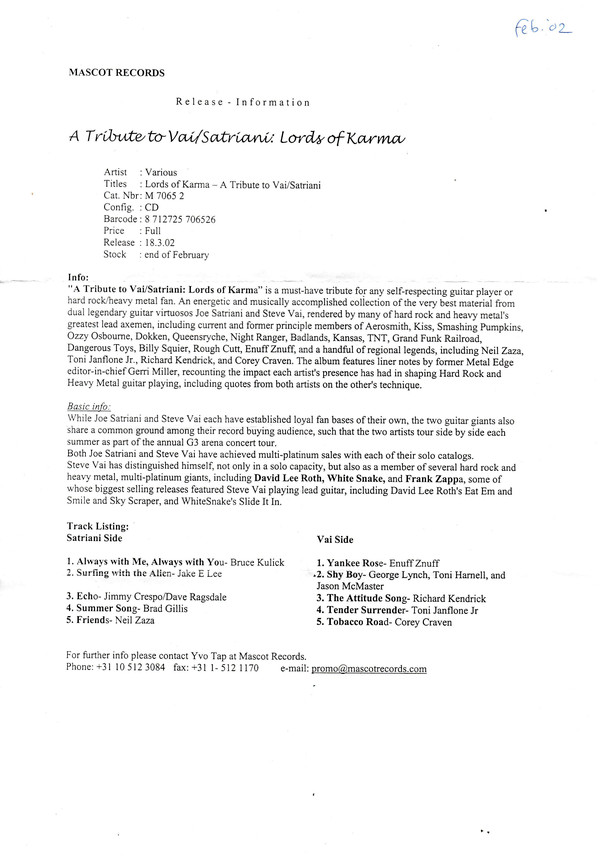 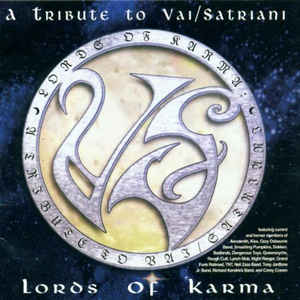 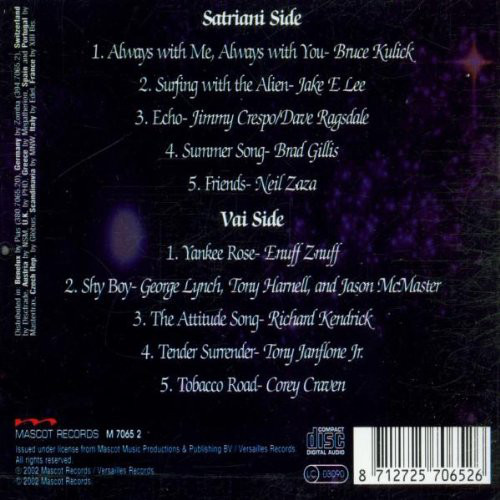 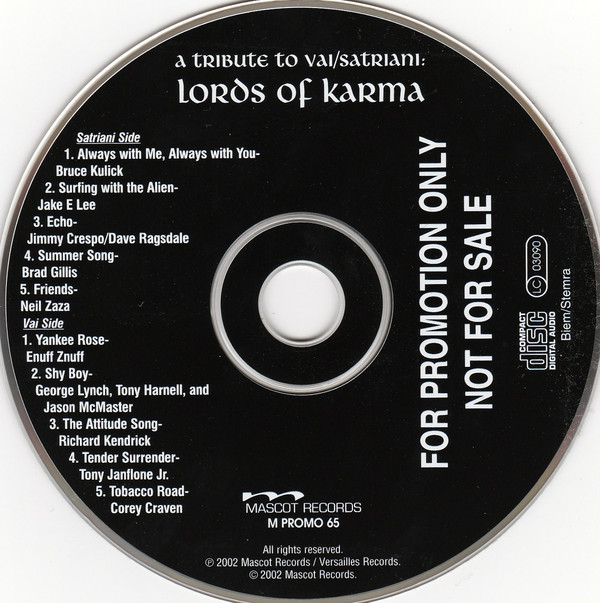 So this is a strange album with very good musicians.
Joe has the A-side,
Stevie’s has the B. And 3 from Steve Vai’s songs originally are on David Lee Roth’s first album. So the track selection is very wrong, but here are great musicians.

Lets see the tracks:
“Always with Me Always with You” by Bruce Kulick. The ex-Kiss guitarist has a totally different style than Satriani, but he made the job well.
“Surfing with the Alien” by ex-Ozzy/Badlands guitarist Jake E. Lee. Good job again. Richard Kendrick plays all backing instruments including the drum programming too, and it sounds good. Richard plays on 5 more songs in this CD.
“Echo” – the best track in my opinion featuring guitar player Jimmy Crespo and Dave Ragsdale on violin.
“Summer Song” by Brad Gillis from Night Ranger (Joes version much better).
“Friends” by Neil Zaza.
“Yankee Rose” from David Lee Roth album by the Enuff Z’ Nuff. I never liked this band, and this version is far from the original.
“Shy Boy” is a star parade featuring Dokken guitarist George Lynch, and the singers Tony Harnell from TNT and Jason McMaster from Watchtower.
“The Attitude Song” – Richard Kendrick is the main man.
“Tender Surrender” – one of the most beautiful Stevie’s song, here’s by a blues guitarist Tony Janflone Jr, so his version is more bluesy.
“Tobacco Road” – this old standard in Stevie’s style by Corey Craven.
So if you like the tribute albums, this is a good listenable album, but not a must-have.

5.0 out of 5 stars Cool Guitar CD !
By Ralph (Portland Oregon) – See all my reviews
This review is from: Tribute to Vai / Satriani: Lords of Karma (Audio CD)
Great hearing the different interpretations of these tunes . Standouts are Brad Gillis, Tony Janflone Jr. ( Really musical ) , and Bruce Kulick !

5.0 out of 5 stars A Celebration of Great Guitarists by Great Guitarists,
“The Lords of Karma – A Tribute to Vai/Satriani” is a celebration of two incredible guitarists by a group of incredible guitarists. The ten song CD features five songs written by Joe Satriani and five written by Steve Vai. Fans of these two titans of shred guitar will absolutely love this CD. The players inject their own ideas and stylistic flavors into the compositions which often will take the songs into new exciting directions. While every track rocks and every player sounds great, there are a few notable highlights:

1. Tender Surrender (performed by Tony Janflone Jr.) is the standout performance tour de force of the album. Janflone injects a subtle jazz fusion element into this song, incorporating lines which take melodic twists and turns, exploding into wave after wave of searing melodic sheets of sound, reaching intensity levels you have to hear to believe. Janflone’s tone is to die for too.

2. Echo (performed by Jimmy Crespo & Dave Ragsdale) is an amazing performance that features guitar & electric violin. The two players offer up inter-twining melodic lines that are both gorgeous and complimentary. They have chops, but retain enough taste to keep the chops on a short leash. The overall sound is just brilliant. I have a cool Klipsch speaker system and through these speakers, this tune just makes me crank up the volume higher and higher (much to the chagrin of my wife). 😉

3. Always With Me Always With You (performed by Bruce Kulick) was the surprise element of the album because first of all, its an acoustic guitar (giving an “unplugged” vibe), and second because I had no idea that Kulick was that great of a player. We all know him from his work with the glam band Kiss. But wow, he really is a brilliant player! I could listen to an entire album of him playing this kind of thing.

Like I said before, ALL of the tracks are excellent. This album packs enough shred content to satisfy all shred heads and serious students of the guitar. Its a superb recording which I will no doubt enjoy for years to come.