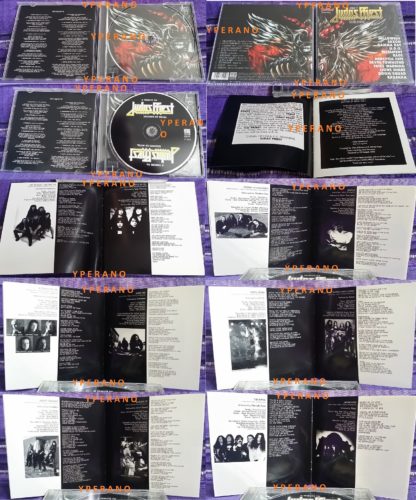 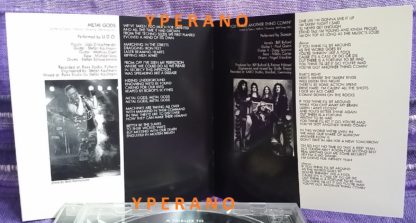 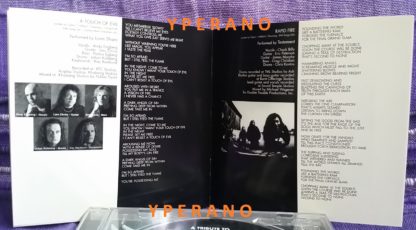 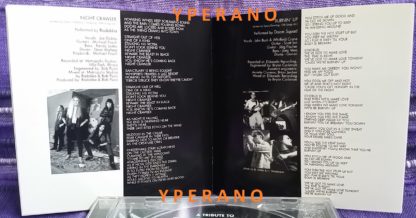 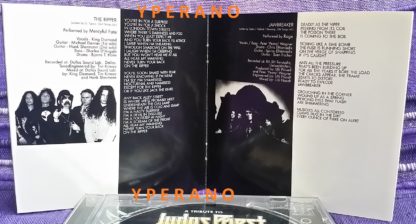 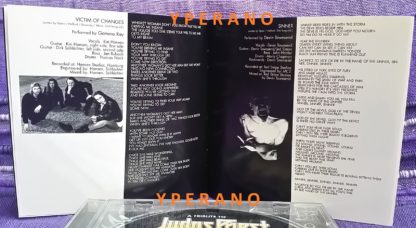 A Tribute to Judas Priest: Legends of Metal Vol. I

5.0 out of 5 stars “Pounding The World/Like A Battering Ram/Forging The Furnace/For The Final Grand Slam”,
There have been tribute albums for as long as there have been records, but it wasn’t until the nineties that we started seeing such things in heavy metal. In 1996 Century Media and Rock Hard Magazine released two of the best tribute albums that I’ve heard, they were for Judas Priest, and paved the way for more of the same by them.

Anyway, the two Priest tribute albums were released overseas, but some of the songs of the two were combined into one for the American release. THAT compilation wasn’t good enough for me over here, so I ordered through Century Medias catalogue, back when they issued catalogues, and had a decent mail order system, their two import discs.

And what a hammer to the head they were. And while each had their strong AND weak points, nobody here embarrasses themselves, and on both discs there are versions of Judas Priests songs that were superior to the originals.

Whats on the second disc is a review for another day. Not being a musician I can only judge the songs on how they sounded and appealed to me.

The first song is by Helloween and is Priests ‘The Hellion/Electric Eye’ and is 4:06 minutes long and originally appeared on Priests Screaming for Vengeance: Remastered album. This was a favorite Priest tune and the song becomes more relevant every year. Helloween just rocks it, and while Andi Deris’ vocals aren’t as good as Halfords in his prime, Helloween does it proud. This song would eventually appear as a bonus track on Helloweens “The Time Of The Oath” reissue.

The next song is by Fates Warning. Now, I’m not a great Fates fan and they often seem to be more interested in playing well rather than playing catchy songs that make them worth listening to. I was never much of a fan of Priests saints In Hell’ song, but they do a 5:07 minute version that may be as good as Priests. Maybe its the better production values than those that were on the Stained Class: Remastered album, anyway, I like this version and this CD may be the only place you’ll hear it as I can’t seem to find it on any of their albums, even as a bonus track.

The third song is by Gamma Ray and this bunch of pros does a great job of ‘Victim Of Changes’. Kai Hansen does a dime on version of Halford, and Gamma Rays double guitar crunch will just make you wanna get up and go. This version is 7:21 minutes long and originally appeared on Priests seminal “Sad Wings Of Destiny” album. Gamma Rays version would later appear on their “Valley Of The Kings” 1997 single, and as a bonus track on the 2002 reissue of their 1997 “Somewhere Out In Space” album.

The fourth song is by Devin Townsend and he wisely doesn’t try to imitate Halford, but he does a raw live primal version of ‘The Sinner’ which is a powerful 7:55 minutes long. Considering Townsends convoluted recording history this version may have appeared somewhere, but I don’t know where. This sounds like a cover version, it gets the notes right, and everybody sounds like they’re having fun. One of my favorite Priest songs and it originally appeared on Priests Sin After Sin: Remastered album.

The fifth song is by Mercyful Fate and King Diamond lets go with a killer version of ‘The Ripper’, and really, isn’t he perfect for this song? Its a brief 2:52 minutes and its another dime-on version, although I think that Diamonds voice is a little deeper that Halfords. You’ll have to look hard, but this cover version of ‘The Ripper’ from Sad Wings of Destiny can only be found as a Japanese bonus track on Mercyful Fates 1996 “Into The Unknown” album, and here of course.

The sixth song is Rage doing a kick-ass 3:26 minute version of ‘Jawbreaker’ from Priests classic Defenders of the Faith: Remastered album. Peavy Wagner can really hit the high notes, but he doesn’t quite do them as well as Halford, and he doesn’t try, but Rages twin guitar musical attack gives this a crunch and power that almost equals the original. Rages version would later appear on the 1997 “Higher Than The Sky” ep. Again, like many of the versions here, this sounds like great cover where everybody sounds like they are having more fun than any cash grab should sound.

On their Encyclopedia Metallum page Raddakka is listed as still active even they haven’t released anything since 1998. I know that their last album didn’t get good reviews, but their powerful 5:51 minute version of ‘Night Crawler’ from Priests Painkiller: Remastered album is way superior to the original. Blasphemy I’m sure, but get over it. This song has not available on ANY Radakka album, and for me, was worth the price of the CD.

The Doom Squad is the token fabricated band. With John Bush (Armored Saint, Anthrax) and Whitfield Crane (Ugly Joe Kid, Medication, Another Animal) on vocals, Scott Ian (Anthrax, Stormtroopers Of Death) and Jorg Fischer (Accept) on guitars, Joey Vera (Armored Saint, Anthrax, Fates Warning, Seven Witches, Jack Frost) on bass, and Gonzalo “Gonzo” Sandoval (Armored Saint, Jack Frost, MX Machine) on drums, and they record the 3:57 version of Killing Machine: Remastereds ‘Burning Love’ and despite the talent here, this is pretty much just a perfunctory version. This band never did anything else and this is the only place to find this version, and while its worth listening to once, its the only real filler here.

Lions Share does the next song and its a powerful 5:36 minute version of ‘A Touch Of Evil’ from the “Painkiller” album. It a good version, and again, this band wisely doesn’t try to imitate Priest, but interprets the song their own way. But, they’re a power metal band so they do it well and their version can be found on their 1999 “Fall From Grace” album.

Chuck Billy and Testament just rip up the landscape as they rampage through a 3:42 minute version of ‘Rapid Fire’ from Priests classic British Steel album. With James Murphy on guitar, this version can be found as a bonus track on Testaments “Demonic” 1997 album. Put it on, strap on your safety belt, and whoosh, let it blow you away.

U. D. O. does a 4:09 version of ‘Metal Gods’ from “British Steel” and while this song doesn’t appear on any U. D. O. album, it could have. So just give it up and live with it as Udo Dirkschneider makes it sound identical to anything from U. D. O. or Accept. You might as well just pretend its a lost U. D. O. outtake from one of Dirkscheiders albums as it can’t be found anywhere but here.

‘You Got Another Thing Comin’ was one of Priests most popular songs here in America and Saxon was the perfect band to do this mid-tempo anthem from the “Screaming For Vengeance” album. This is the official reformed Saxon, not the later splinter group with Graham Oliver and Steve Dawson (known alternatively as Saxon, Son Of A Bitch, or Oliver/Dawson Saxon), and Saxons version is 5:31 minutes long, just rocks, has better drums than the original, and as far as I can ascertain this is only place you find it.

No doubt about it, this is a superior collection of cover versions. If you’re a Judas Priest fan, and you’re looking for a collection of Priest songs with a slightly different sound, this is it. If most tributes were this good, tribute albums wouldn’t have the bad reputation that they have, and every Priest album is represented here except Rocka Rolla, Point of Entry (Exp), Turbo, and Ram It Down. 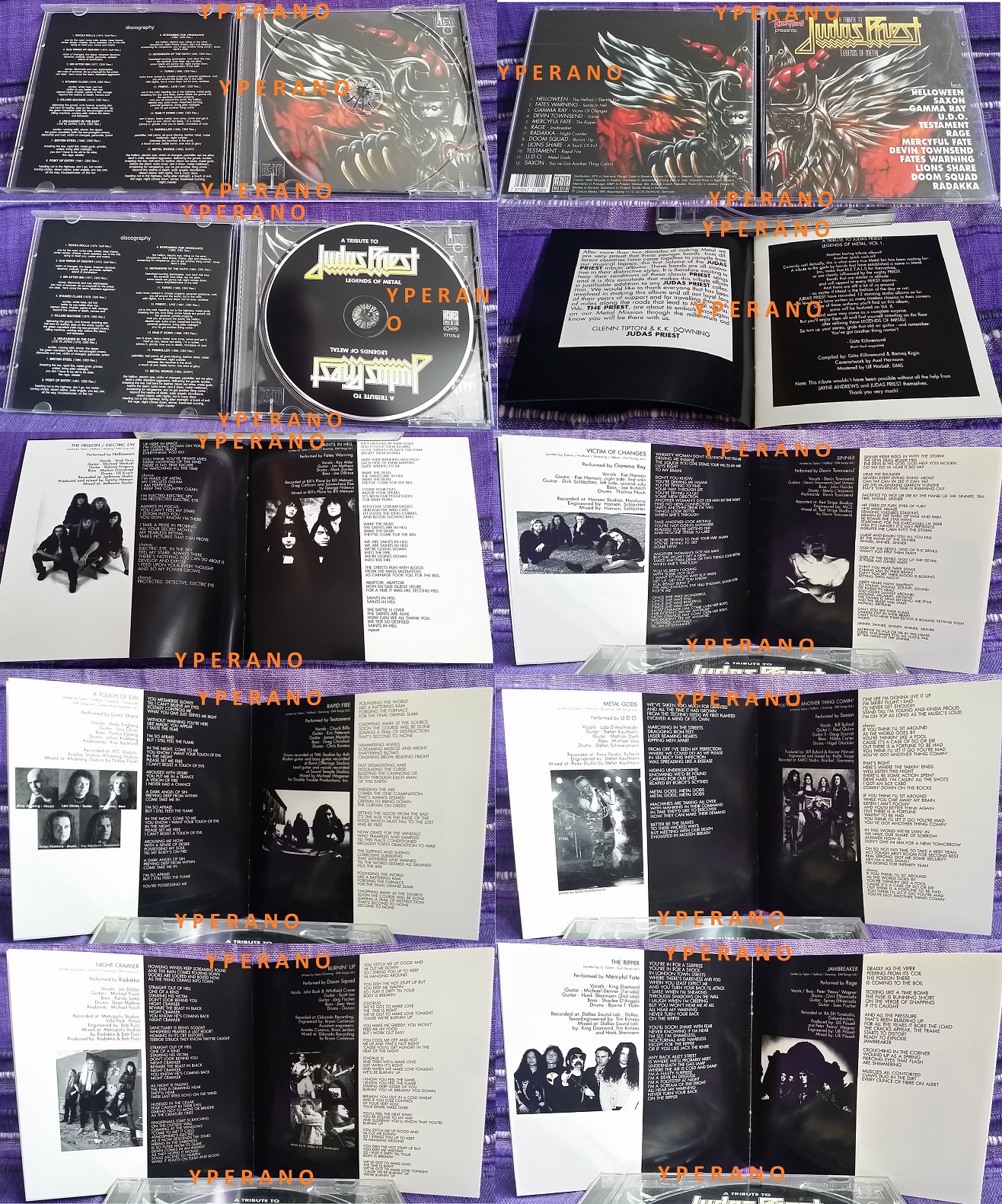 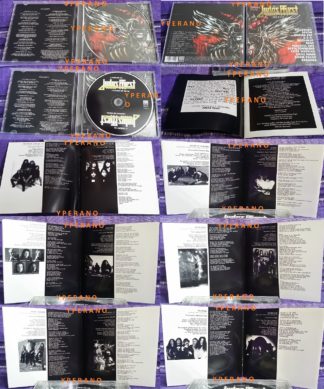