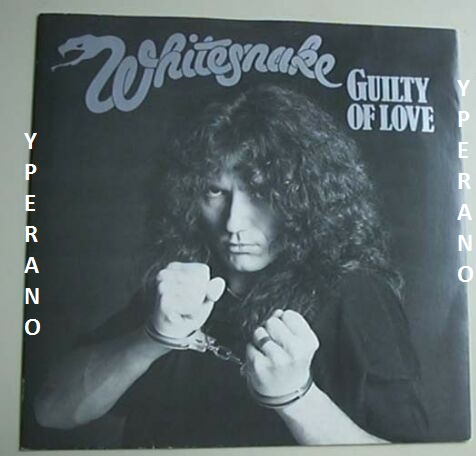 “Guilty of Love” is a single by the English hard rock band Whitesnake, from their 1984 album Slide It In. The song peaked at number 31 on the UK singles charts.
The song is led by the twin guitar leads of Mel Galley and Micky Moody (John Sykes in the US remix), and much of the lyrics are the chorus being chanted over and over again.
Even though the song is featured on the album Slide It In, it was actually released a year prior. The song was performed at 1983 Monsters of Rock festival and was the only new song in the bands set, but the entire Slide It In album was supposed to be released in time for the festival. The song was just released, so that the band could have something to promote the new album.
A music video was also made, which is compiled from different live performances, some of which are taken from the 1983 Monsters of Rock show.

’Allo ’allo ’allo, what’s going on here, then? Has chief Snake David Coverdale been locked in handcuffs by a jealous lover or by one of the many people he sacked from Whitesnake? Maybe this single should have actually been called Guilty Of Line-Up Changes.