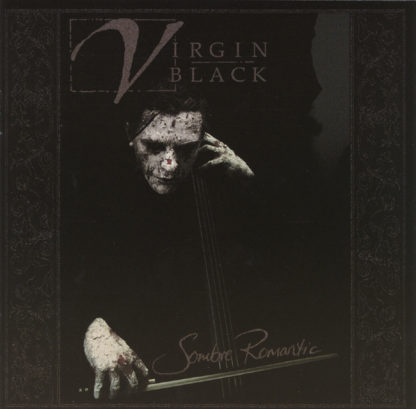 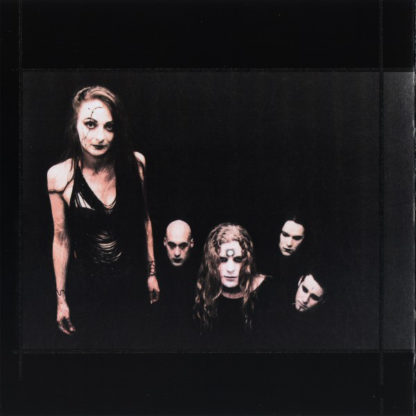 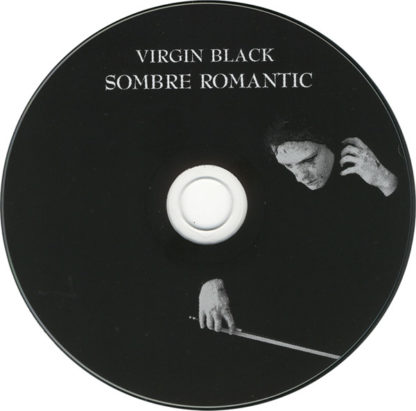 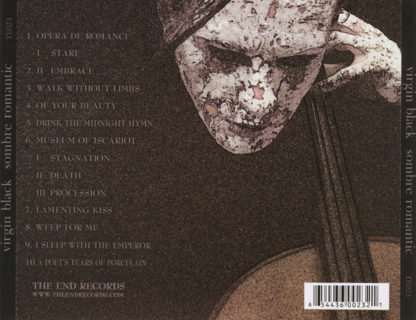 Sometimes a band emerges that defies all expectations, takes control of ones body and soul, and never lets go. Virgin Black is precisely that kind of a band. On its first full-length US release, this Australian group creates some of the most unique sounds in modern heavy music, taking the listener on a mysterious voyage of exquisite sadness. This is the soundtrack to a dark, romantic movie that unfortunately is yet to be filmed. Every song on the album possesses the quality of suspense, depression, and at times, even horror. The unprecedented amount of emotion and depth is created by the vocals of Rowan London. In his finest moments, Rowan sounds like a professional opera singer [Of Your Beauty, 1:26-2:13]. His black metal shrieks [Drink the Midnight Hymn] and doomy moans [Museum of Iscariot] are just as beautiful and effective as his clean vocals, sending chills down my spine with every listen. While Sombre Romantic utilizes quite a few musical instruments, Samantha Escribes guitars are the highlight of this album. They stand out, because they are not dominating: they give the music enough room to breathe, yet, create an incredible impact which makes these songs a heavenly
experience. The music Virgin Black creates does not follow any specific formula. Every song on the album has its own personality. For example, Opera de Romanci and Embrace sound like they could have been on The Omen soundtrack. A Poets Tears of Porcelain comes across like a psalm. Weep for Me comes across as a funeral dirge that will make you cry as if a part of you just died. On Sombre Romantic, Virgin Black proves to the world that they are true innovators: there are no predictable melodies or vocal patterns on Sombre Romantic; everything moves in its own mysterious way. To simply put it: this is a must have in anyone’s music collection!

5.0 out of 5 stars **** Virgin Black ****,
This has to be one of thee best albums/bands I’ve heard in years.
This album Sombre Romantic 2001 showed Virgin Black honing their skill and creative thought in ways I haven’t heard the likes of before. Essentially five years in the making this album has so much to offer and is a veritable river of emotion and musical texture from the classical to the electronic ultimately making something new that the closest thing I could label them with is dark-wave but the more I listen to them the more I believe this is wrong.
Note; Virgin Black have male vocals instead of the usual female vocals in bands of this neo-classical nature. They are also exquisite and help portray the deep emotion present in the music

Because of this the songs all each have their own distinct character and individuality, I believe this may be to the fact that they worked on them over a long period of time and have been able to evolve their sound and songs letting them mature like that of a fine wine giving them body and depth. This is strongly presented in the track Museum of Iscariot delivering beauty sadness and superb musicianship.

I would urge anyone that likes darkwave/doom to venture into Virgin Blacks dark sound and hopefully want to stay forever.
For current fans the most similar band I can think of at the moment is fellow Australian misery mongers Elegeion who’s work I also highly recommend

A Classic Piece Of Art – 100%
This album is a beautiful piece of work. It is dark, atmospheric, emotional, and dynamic, all the essentials of a perfect Gothic doom record.

The music on the album is very bleak and heavy (in a figurative and literal way). The Neoclassical/ opera influences of the band shine on such songs as Opera de Romanci pt. 1 and pt. 2, and the disturbing heaviness shines on Drink The Midnight hymn and I Sleep With The Emperor. The music ranges from opera/ romanticism, neoclassical, industrial, Gothic rock, doom metal, and even some minor death metal parts. Lyrically, the album is a heart wrenching spill of emotions not meant for the cheerful at heart. The atmosphere of the album is enticing and the vocals feel as if they entrance your very soul.

Overall, the album is a perfect piece of art essential to any doom metal fans collection. For fans of The 3rd And The Mortal, Synnöve, Elend, Die Verbannten Kinder Evas, and Lethian Dreams.

Most painfully emotional album ever! – 98%
This is one of the best albums in my collection so i thought i’d share it with you all.

Each track on this CD has something different to offer and it leads to a very diverse, let unified record, so at no point does it get boring. Everything about this album is brilliant, from the music to the lyrics (this is a concept album).

The cd starts out with Opera de Romanci (Stare/Embrace) some dark and depressing cellos and some operatic vocals sung in Latin. The atmosphere is very haunting and eerie. Then the guitars come in and some whispered vocals are heard. They say “my god, weep for me…” a reoccurring line throughout the album. The next track, Walk Without Limbs (the most experimental track on teh album) comes in… Some programmed drums come in and some more cellos and everything starts building up then just stops…some whispering is heard then a chorus burst out Shel masa Fun de Ma! (manifest of the soul) then a evil sounding voice is heard…”walk without limbs, walk through my soul” This continues, each time scarier than the next. The guitars come into a quite heavy section and the previous mentioned vocals are screamed till the song ends abruptly with a creepy piano outro…
The piano leaves the listener feeling very uneasy…you really get caught up in the atmosphere. This leads in Rowan’s mournful vocals of Of Your Beauty. This song is pretty much all piano but it is so emotion filled especially when the piano starts getting played mercilessly and Rowan sounds as if he is going mad. Amazing!
Drink the Midnight Hymn comes in with the first real growls heard on the album and some heavy guitars, they lead into some of Rowan’s clean singing and later into a choir chanting in Latin again. The music is always changing, keeping the listener bound to the atmosphere. There is some more piano to follow along. A very dramatic song.

Now, the highlight of the album, Museum of Iscariot, this 7 minuet epic is the most depressing, gut wrenching song ever! It begins with a very epic sounding string section then end suddenly to cut to very lamentful vocals and acoustic. The lyrics are very harsh and produce strong imagry, such Jesus dying in the narrator’s painting his face with sadness. Samantha’s solo is pure emotion, really gets to you. There is a growled line of “but he is dead” and cuts to more clean sorrowful singing. Another type of clean vocals comes in, more relaxed, and closes the song with a very epic feel.

Lamenting Kiss, comes in with some very monotone speaking, adding to the disturbing atmosphere. The chorus is excellent, the whole song excellent. It leads into the instrumental Weep For Me where distorted guitars keep a nice atmosphere while “my god, weep for me” is heard several times. I Sleep with the Emperor is probably the most unique track. It starts with Rowan singing as if he is scared shitless and leads into some distorted guitars. Then you are absolutely pummeled by 3 vocals layers. One high operatic singing, the other a snarl and the most prominent, a gutteral growl. Really brutal. It leads into more choirs, very eerie, and then tumbeling back into the brutal section, a real ass kicker.

And finally, the closer, A Poet’s Tears Of Porcelain, lots of vocal layers and really epic. Rowan’s vocals fit the lyrics perfectly and the song ends with a nice chorus and it is absolutely beautiful. There could not have been a better way to end this album. The transition of emotion throughout the album is highlighted in this song. The perfect conclusion to a very disturbing album.

Virgin Black’s Finest Hour – 98%
“Sombre Romantic” is probably Virgin Black’s best effort to date. This, along with the “Trance” E.P. contains the band’s most unique sound (IMO). Very good operatic tenor vocals, astonishing guitar work, and very classically based songwriting made this band supreme. They have since fallen under the “music that goes nowhere” spell like many others *cough* Ulver *cough*. And of course, people think that music that lacks direction is much better than music with a focus. However, this is when Virgin Black knew how to create real songs that were really efficient. This is “Sombre Romantic”!

Now with all that said and done, this album is sadly not perfect. We will discuss what is perfect first. London’s luminous vocals. Fucking brilliant! What we have here, ladies and gentlemen, are some of the most talented vocals in music’s long history. Well refined, gorgeous opera vocals that would make any classical fan cum in their pants. Did I mention the best part? London is male! Virgin Black is defiantly not a Nightwish clone that rides the success of Tarja Turenen. Metal’s operatic male population is simply meager. And although Virgin Black has a female in the band, London handles all the vocal work here. He also throws in some harsh vocals that really don’t fit the music, but they are very well placed and sparsely used.

Another perfect aspect is the guitar work from Samantha Escarbe. Damn this woman can play guitar. She is easily one of the best guitarists I have ever heard. Just check out the outstanding solo on “Museum of Iscariot” and you will know what I mean. She has a unique playing style that complements the music very nicely.

Now we move to the un-perfect aspects of “Sombre Romantic”. Right away you will notice the instrumental population. There are way too many of the damn things! Five in total! And it really does not help when the album begins with three of them in a row, which leads me to my next point. The track listing is terrible. Who thought that three instrumentals in a row was a good idea? If you make six songs and five instrumentals, the logical thing to do would be to alternate between them!

Another un-perfect feature is the drums. The drummer for this band has always gotten under my skin. He plays in 4/4 mostly, with annoying techno beats and his drum sound is just ugly. He really does not appear to be skilled behind the kit, and I think the band needs to replace him.

Highlights on this album are “Of your Beauty”, “Museum of Iscariot”, and “I Sleep with the Emperor”. “Of your Beauty” is beautiful with amazing melancholic vocals showing great range. It also contains professionally done key work. “Museum of Iscariot” is a stunning effort, with more superb vocals and gloomy guitar work that could bring a tear to your eye. “I Sleep with the Emperor” is a faster, shorter, and more metal sounding song. It has awesome opening singing from London. Then he uses harsh vocals through out the rest of the song. A very effective metal song.

Overall, this album is very good, and certainly one of metal’s most creative works. Highly recommended to any fan of classical music and metal.