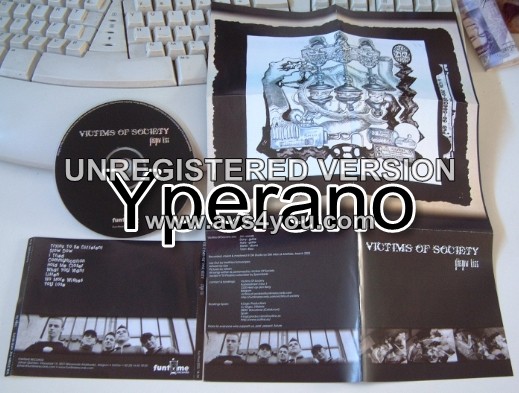 When VOS started playing together in 1992, they were a bunch of young and inexperienced kids, but in love with hardcore and dedicated to the bone. the band started playing on a regular base with bands like UK Subs, Funeral Dress etc. the debut ep ‘way of life’ was released in 97. Then they create their own label, called Daybreak Records and in 1998 screaming alone’ is released followed by some intense touring through Spain and the United Kingdom. ‘Glasgow kiss’, their Funtime Records 2002 release is filled with fast, raging and explosive old skool hardcore. Furious, non sensitive for trendy shit and f*cking hardcore. Give it a try. Note it also contains the amazing cover version of Playboy Subscriber by Spermbirds CD.

For fans of Good Riddance, Section 8 and Raised Fist, Agnostic Front, Sick Of It all,

Some albums are so good that time seems to fly by while listening to them. This is a really good piece of old school hardcore that doesn’t sound fake at all.
In comparison to a lot of NYHC bands that have a tough guy vocal style, you get here the high pitched screamo vocals that fit very well the short length of the featured pieces. Only the hidden bonus track Playboy Subscriber is a little bit longer and shows the bands roots as it is a Spermbirds cover version. OK, the Spermbirds were a lot more melodic and accessible than VOS, but anybody who likes mad screaming true old school hardcore will enjoy these nearly 18 minutes of anger. 8 points for a cool trip into the past, when HC was more about attitude than fashion.

Glasgow kiss is everything a hardcore record should be: raw, fast, and hard. The fact that they throw down and pay tribute to one of my favorite hardcore bands of all time only sweetens the deal. Victims of Society get bonus punk points for covering “Playboy Subscriber” by Germany’s Spermbirds. The song rages – the fact that these kids are able to do it justice is evidence of their purity of direction and true hardcore spirit.