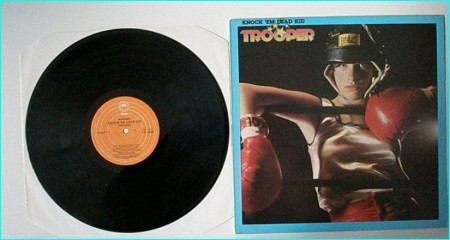 TROOPER: Knock Em Dead Kid LP 1977 platinum (!!) album. Check all audio SAMPLES (edits) and a video of the singer talking about their hit song “We’re Here for a Good Time”! 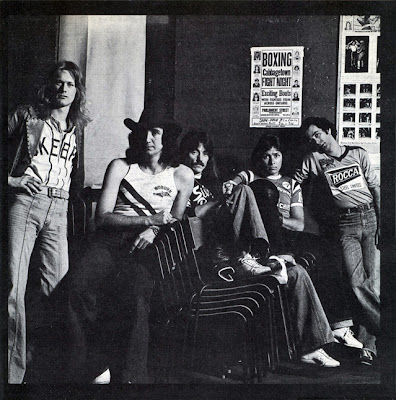 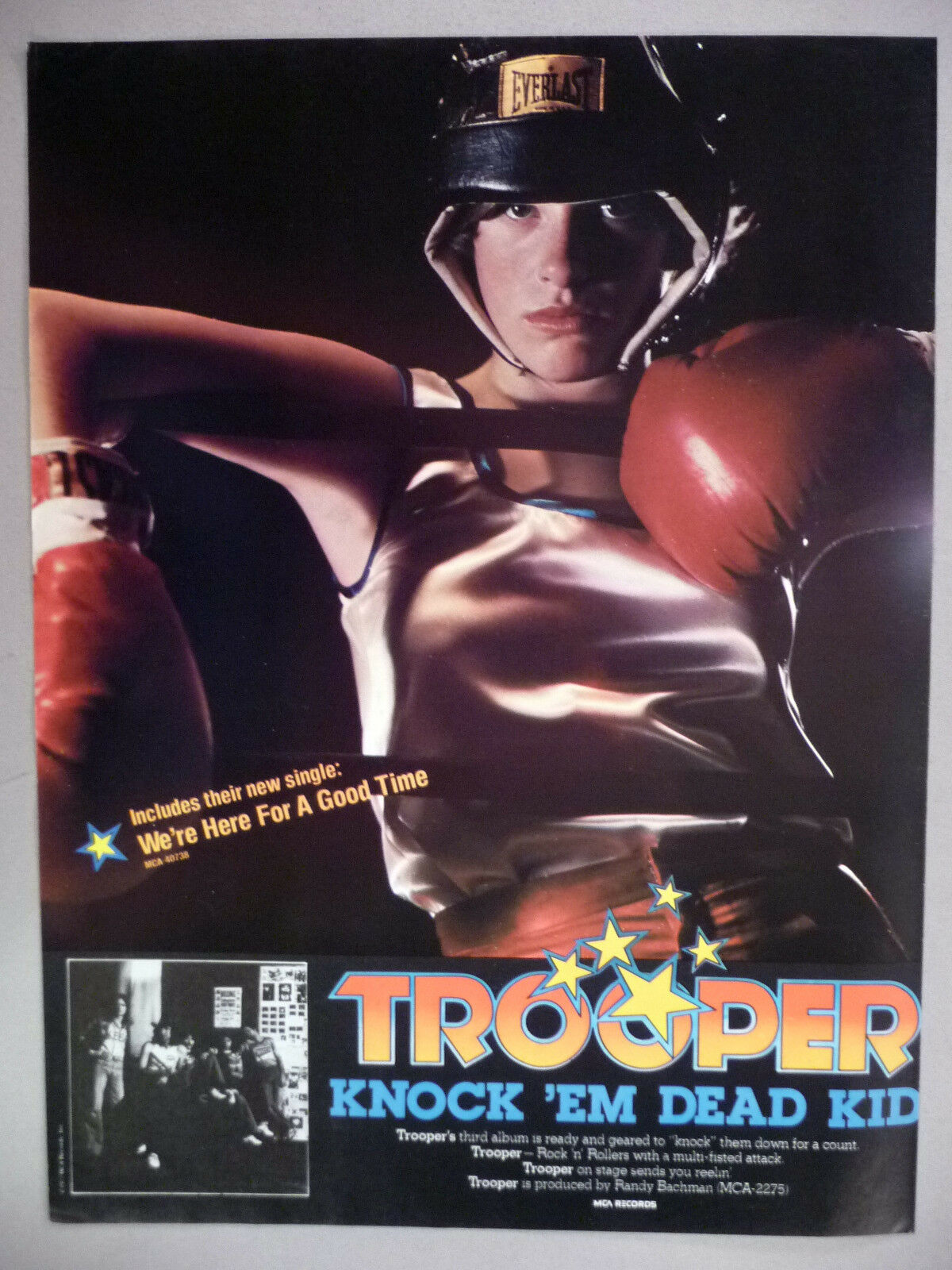 Knock ‘Em Dead, Kid is the third album by Canadian rock band Trooper, released in 1977. The album was produced by Randy Bachman of Bachman-Turner Overdrive and The Guess Who fame. Bassist Harry Kalensky was replaced by Doni Underhill prior to the recording this album, which was the group first Canadian platinum certified album. The album contained the hits “”We’re Here for a Good Time (not a long time)”” and “”Oh, Pretty Lady””.
Strong harmonies and a frolicking musical outcrop make Knock ‘Em Dead Kid one of Trooper best works, giving way to three solid singles and helping them become an important musical icon in their homeland of Canada.
A blend of both amusing and subtle music. “”We’re Here for a Good Time”” is a peppy, party-all-night kind of tune, while “”Oh, Pretty Lady”” is a truly tasteful ode. “”It Been a Long Time”” is a mild but honest rock song that drifts along wonderfully.

5 “We’re Here for a Good Time””
Lead Singer/Songwriter for Trooper Ra McGuire, talks about how the band’s driver came up with the name of the song, how they recorded the song and lastly how Michael Bublé almost recorded a cover of the song!
6″”Oh, Pretty Lady””
7″”Cold Cold Toronto””
8″”(It Been a) Long Time””
———————————————————————————————
5.0 out of 5 stars Classic Rock
One of the 3 greatest albums Trooper ever recorded (along with “”Two for the show””, and “”Thick as thieves””). Great AOR (“”We’re here for a good time””) balanced with touching ballads (“”Pretty lady””), a soundtrack to my youth! A classic album from a legendary band!!
———————————————————————————————
5.0 out of 5 stars Fine third effort from classic Canuck pop rockers
Trooper was one of Canada best 1970s pop rockers. From 1975 to ’80, the Vancouver quintet produced five albums and a dozen top 20 hits. And they’re still around, with founders Ra McGuire (vocals, harmonica) and Brian Smith (guitar/vocals) still touring around the country.
Knock ‘Em Dead Kid, the third of four albums produced by Guess Who/BTO founder Randy Bachman — a big influence on the band sound — has the usual mix of rockers (the title track), unforgettable pop classics (We’re Here For A Good Time) and ballads (Oh Pretty Lady). Hook laden, well arranged, they show a band at the top of its form even as it debuted a new bass player (Doni Underhill).
———————————————————————————————
5.0 out of 5 stars Most consistent effort since the debut
this one (I think the first one without founding bassist Harry Kalensky) provides some very solid, very tasteful and genuine non-hit material: the lead (and title) track, as well as “”Cold, Cold Toronto”” provide the strongest examples.
The early Trooper releases not only bore Randy Bachman production signature, they also featured him in more than a few solo/leads on guitar. See if you can spot the Bachman!
This record represents the peak of the synergy between Trooper and their producer, and stands well on its own as an example of good, solid late 70 CanCon.
———————————————————————————————
5.0 out of 5 stars Go Trooper! We’re all Vol!!
I am a big trooper fan. He puts on a show that quite frankly leaves you without an emotion. You want to clap, but you can’t get your hands to work. The only emotion that really fits a trooper show is singing the greatest song ever recorded, “”Rocky Top””. How much do I love Tennessee football you ask? I have painted every square inch of my home orange including my legs. The color orange rules because I can go huntin in the mornin, work my road crew job in the afternoons and go to a Vol game at night! Whoo hoo, good ‘ol rocky top, rocky top Tennuhseeee! That right there felt better than sex. You what else is better? A chest bump from Trooper. He a crazy kook that acts like a cheerleader, but he actually a coach. When trooper puts on a show, Every blue chip player in america becomes a silent commit to the vols. They’re ALL VOL!!!! Whooooooo!!! How do I know this? I just do, trust my sources. One night we were all out in the boro and Trooper comes walking into hooters and Jamie and Chris run up to chest bump Trooper. They kept chesting bumping each other singing rocky top for 2 hours while J Abs and I took home a couple waitresses. You need this album, it Rocky tops!!”

Be the first to review “TROOPER: Knock Em Dead Kid LP 1977 platinum (!!) album. Check all audio SAMPLES (edits) and a video of the singer talking about their hit song “We’re Here for a Good Time”!” Cancel reply 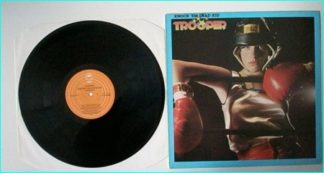 You're viewing: TROOPER: Knock Em Dead Kid LP 1977 platinum (!!) album. Check all audio SAMPLES (edits) and a video of the singer talking about their hit song “We’re Here for a Good Time”! £4.50
Add to basket