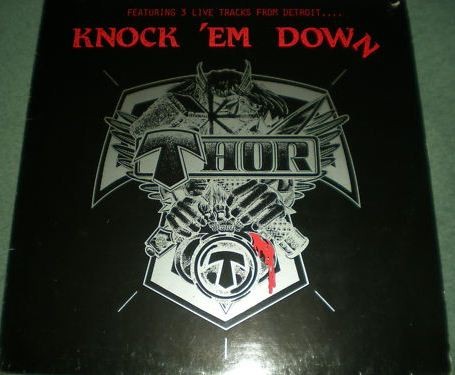 Side B:
1 Lightning Strikes
2 Anger
3 Knock Em Down

B side recorded live. Three live tracks recorded by WLLZ radio at Harpo’s Concert Theatre, Detroit on May 24th 1985.

A panned, yet overlooked success

Serving as the band’s visionary, Jon Mikl Thor (pictured with the four Dobermans on the cover) embraced wholeheartedly campy theatrics with feats of strength and solid, arena ready dynamics. But Jon was far from a championship bodybuilder-turned-musician. In fact, he had honed his chops from playing bass and singing in a number of garage bands, and had always exhibited a passion for meaty, pulsating hard rock music. Jon was under the notion that in order to get anywhere, he must seek bigger pastures elsewhere–namely, the USA.