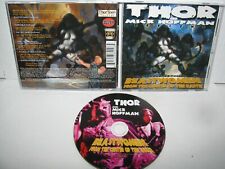 Great effort by the almighty knight of ‘cheese metal’, the nearly unforgettable – Thor! Worth checking out if you have the time and desire. Cuts here I was impressed with was the power-packed “Sleeping Giant”, “Sirens Calling”, the sedate “Hail Thor” and “Cry Of The Valkyrie”. Line-up: Thor – vocals, Michael Hoffman – coordinator&vocals, Mike Frank and Frank Soda – guitars and Scoot Woolard – bass&samplings. Give it a shot.

I’ve been a fan of Jon Mikl Thors ever since I stumbled across “Rock n Roll Nightmare” at my local Mom & Pop video store in the late 80s.
Yes, this a cheesy album…how could it not be? If the title doesn’t clue you in to the nature of the tunes found here, and the artwork leaves you intrigued as to what type of music is contained on the disk…then please avoid getting into police work.
Thor is all about being a ‘Rock Warrior’ (if you don’t believe me…just give “Hail Thor” a listen)..and in this Rock Opera Concept Album he has to battle Beastwomen who have been living underground in Mushroom Land…(no I’m not making that up!). Throw in some Panther People and you get one heck of an underground showdown. Actually, I think the “Panther” song would be awesome to play at Carolina’s home games…what better way for the struggling NFL team to rush onto the field and get their fans fired up?
Anyway, you get some decent power metal guitar work, and tunes which are actually pretty catchy….and the glory of actually owning a disk called “Beastwomen from the Center of the Earth”…that is priceless!

She co-wrote the following 11 great songs, that are easily Thor’s best. Is this a coincidence?

THOR – Only The Strong: 2045, Start Raising Hell, Knock ‘Em Down, Now Comes The Storm, Thunder In The Tundra, Hot Flames, Ride Of The Chariots

Jon-Mikl THOR – Recruits Wild In The Streets: Warhammer, Ragnarok, Lady Of The Night

Vocals (she sung with THOR on)