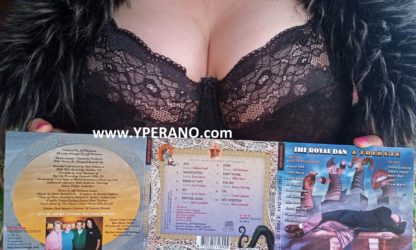 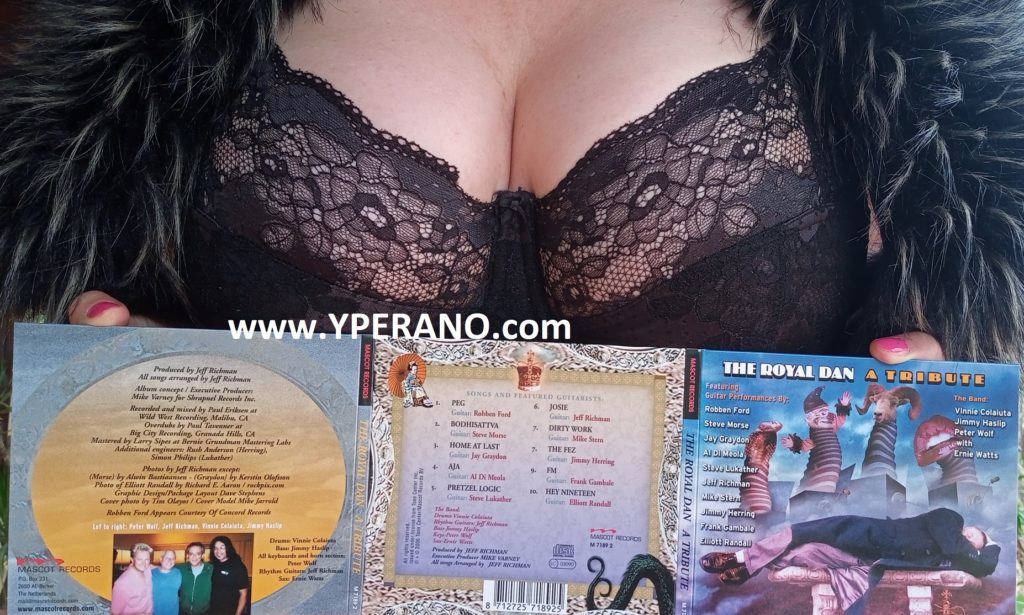 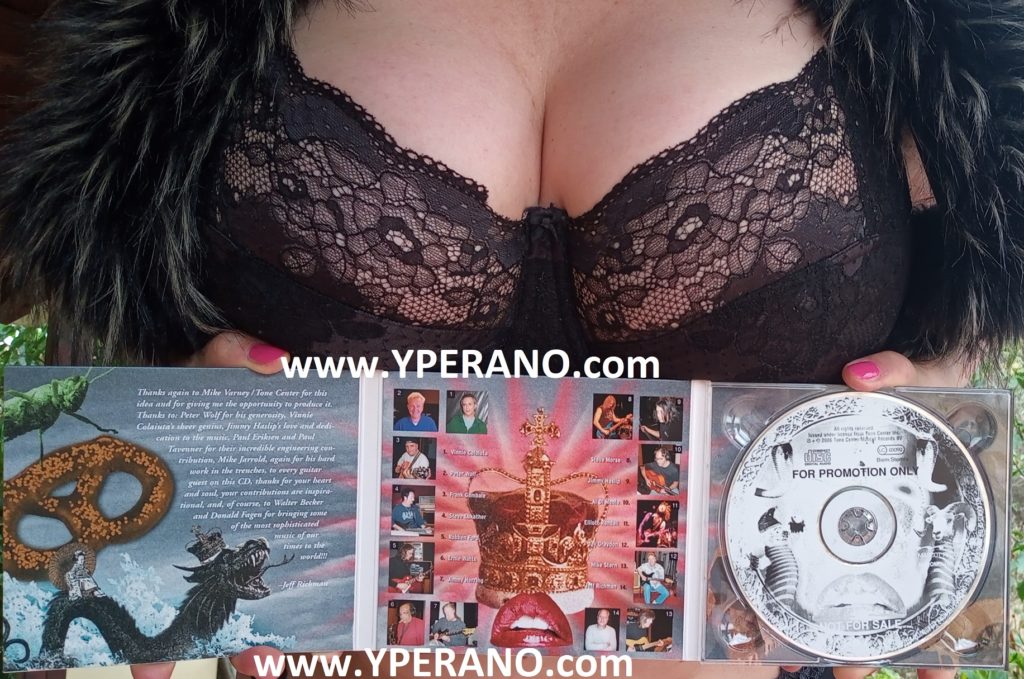 Official digi promo, “For promotion only” is printed on CD.

Guitarist Jeff Richman came up with this idea: get a house band together made up of A-list session guys (bassist Jimmy Haslip, saxophonist Ernie Watts, etc.) and then invite an all-star cast of guitar gods to come in and take turns interpreting the songs of Steely Dan as jazz-rock fusion. It works either as well or as dreadfully as you’d expect, depending on your perspective. What you need to understand going in is that Royal Dan: A Tribute is largely about tone: this is a guitar record for guitarists, and will appeal greatly to the kinds of guys who can sit around for hours discussing the relative merits of vintage and modern distortion pedals. But its not all guitar-geek wankery. On “Hey Nineteen,” Elliott Randall uses sneaky phrasing and delicate volume variations to turn his bluesy solos into something really special (though Peter Wolfs keyboards are a bit intrusive), and Frank Gambale eschews grandstanding technical fireworks in favor of tasteful harmonic experimentation on “FM.” Al di Meola goes insane on his classical guitar on “Aja,” and Robben Ford blows the doors off with a thrilling rendition of “Peg,” but Mike Sterns take on “Dirty Work” isn’t as exciting as it should have been, and Steve Lukather’s version of “Pretzel Logic” has just a little bit too much Foreigner to it. Again: keep in mind that this is a guitarists album — guitar geeks will find something to argue about on every track, and that’s really what its all about.

Steely Danhave an uncanny ability to adopt a perfectionist approach and yet create deeply resonant music, despite the hundreds of hours spent honing it. Filled with memorable melodies, infectious grooves and no shortage of jazz harmonies, Dan is the perfect crossover band. Over the years its provided grist for innovative and iconic solos by artists like guitarist Larry Carlton and saxophonist Wayne Shorter. And that’s no small feat, since such a considered approach to music-making often ends up being well-crafted but emotionally lacking.

Guitarist Jeff Richman has been on a roll lately with a series of guitar tributes to Mahavishnu Orchestra, Miles Davis and John Coltrane. But when he decided to tackle Steely Dan, in some ways he was faced with his most difficult challenge yet. How do you reshape such meticulously crafted songs into vehicles for some of fusions finest guitarists, saying something new while still retaining the signatures that have placed so many of Dan’s tunes into the lexicon of an audience whose interests extend far beyond fusion? How, indeed, do you improve on perfection?

The fact is that Richman knows just when to rework a tune sometimes turning it inside out, as he does on “Aja, where the solo section becomes the intro, and the familiar theme doesn’t show up until nearly two minutes in and is rearranged into 7/4. He also knows when to leave well enough alone, as he does on a more faithful take on “The Fez.

Richman knows how to shape the material to the strengths of the specific guitarists he’s recruited for this project. While all the signature hooks remain, Richman morphs “Peg into a Bo Diddley rhythm thats a perfect match for Robben Fords bluesy swagger. He turns the heat up on the blues-based “Pretzel Logic, letting Steve Lukather’s powerful playing go farther than Becker and Fagen ever would.

With a crack band featuring drummer Vinnie Colaiuta, bassist Jimmy Haslip, keyboardist Peter Wolf and saxophonist Ernie Watts, Richman also knows that tampering with a tune like “Kid Charlemagne, where Carltons solo was so definitive, would beg inevitable and unfair comparisons. Still, by using Al Di Meola’s classical guitar as the primary voice on “Aja, he redefines it; and while Di Meola’s characteristic speed is there, he turns in one of the most cohesive and focused solos of his career.

Sometimes Richmans penchant for playing with time doesn’t quite fit. On “Josie a feature for his own jazz-centric guitar work the 6/4 vamp and 9/4 verse become blatantly overemphatic. Still, Richman ultimately succeeds in reinventing the music of Steely Dan into more than a mere shred-fest. The Royal Dan may not improve on the perfection of Becker and Fagen’s craft, but it does demonstrate that its possible to adapt it into a form with even more distinct jazz-centricity than has been at the core of Steely Dan all along.

Visit Jeff Richman on the web.

5.0 out of 5 stars A Response to the ‘Zeitgeist’ Critique,
Isn’t life complicated? Why do so called critics/reviewers involve themselves with the non issues. ‘People who like Steely Dan annoy me…etc’ Why can’t this be reviewed for what it is? Mike Varney is a guitar album producer – that’s what he does. This album gets a bunch of hot guitar players together and they play Steely tunes in their own inimitable way with a lot of gusto. Like it or loathe it – simple as that. People who will buy this album have ears of their own and do not need to borrow anyone else’s.

This album is a collection of great contemporary rock songs by arguably one of the most stylish bands of that era, played by excellent musicians in yet another approach to this great material. If only the critics against this music had one tenth of the acumen the music has. ‘Couldn’t fault the album but didn’t like the drummers haircut… etc etc’ Yawn.

I am a musician, and this album is terrific. Buy it and support great musicians, and great songwriters. 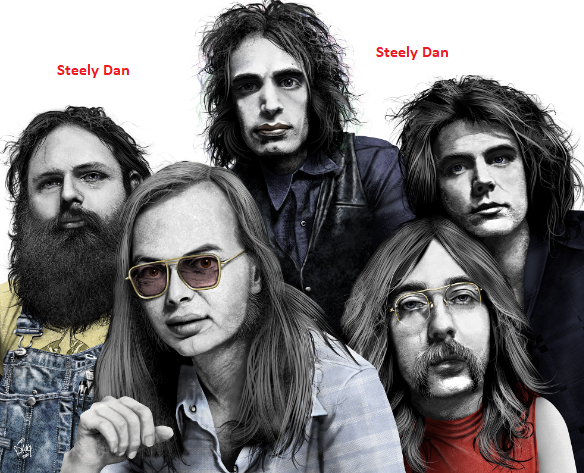 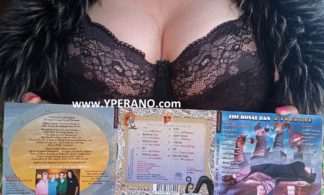